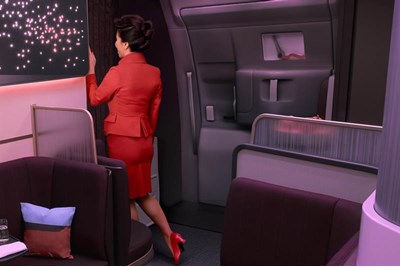 The airline is one of many to have brought in drastic measures to cope with a fall in passenger demand, due to global travel restrictions and the public’s reluctance to travel during a pandemic.

In a recent statement the airline said the cost would be spread over six months' salary in order to ‘drastically reduce costs without job losses’.

It has permanently stopped the London Heathrow to Newark route with immediate effect and has said it will prioritise ‘core routes based on customer demand’.

The airline said: ‘This change amounts [to] approximately an 80% reduction in flights per day by 26 March. As a direct consequence we will be parking approximately 75% of our fleet by 26 March and at points in April will go up to 85%.

‘Owing to restrictions to international travel the airline is reducing services to focus on core routes, depending on customer demand. This will be subject to constant review as the situation evolves.’

Virgin Atlantic has also said it will offer all staff a one-time voluntary severance package, a sabbatical of six to 12 months, defer annual pay increases until January 2021, and reduce its employer pension contributions for a year.

Mary Walker, a partner in the employment and retail teams at Gordons, told HR magazine: “Asking staff to take unpaid leave is not unheard of; we have seen it before in times of crisis and in the absence of the contractual right to lay off employees it is a practical solution.

“However, the eight-week period shows the strain that COVID-19 is putting on the travel industry in particular. Other areas such as retail and leisure are also feeling strain but those industries are unlikely to have employees who could afford to have no income for that timescale.”

Walker also stated that employers are within their rights to ask employees to take unpaid leave, but employees can accept or refuse the request.

Virgin Atlantic has also asked the government to give the aviation industry emergency credit facilities to a value of £5 billion to £7.5 billion. This, and the staff measures, has the support of union Unite.

Unite said the government should adopt a four-point plan to help ensure that the whole industry can survive the current crisis.

Assistant general secretary Diana Holland said: “Workers throughout the entire aviation sector are incredibly fearful about their futures and it would be wrong of the government to exclude their voice from future negotiations.

“The government should not be simply providing financial support to the airports, airlines and other aviation employers but they must ensure that the workforce are also protected through this crisis.”

“Only time will tell whether such cost-cutting measures are successful in these exceptional times,” Walker added.