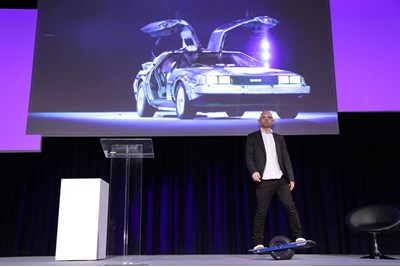 ​Speaking at the CIPD Annual Conference and Exhibition, Jason Bradbury outlined technology's power to boost empathy and advised HR not to worry about automation

Technology could help us to become more empathetic, according to Jason Bradbury, a television presenter and children's author best known for his role on The Gadget Show.

As an example, he recounted his experience of using a simulator that was able to replicate the physical sensations of ageing.

“I once used a piece of augmented reality that simulated being in an old lady’s kitchen; it was designed to give you the experience of the ageing process. You had to do all of the same things that she does while wearing gloves that gave you the sensation of immobility in your joints, that your nerves are dying, and that you have calluses. You also wore glasses that gave you the feeling that you had cataracts,” he said.

Virtual reality tech like this could be used to teach employees to better understand other people, said Bradbury: “Imagine the potential for this when looking at discrimination in the workplace? Through using these sorts of simulators there’s an opportunity to increase empathy.”

Bradbury also showed a clip of ‘Elios’, a game that pinpoints where you could do a good deed across a fictional city – such as giving to the homeless – to progress through the game.

As a profession HR will be far more resilient to the effects of automation than they might think, Bradbury reassured. "I can understand that you may be worried about AI being able to take the jobs of recruiters. There’s no doubt that technology will create jobs, and it will take jobs. But from what I’ve seen that you do – dealing with people – I don’t think that can be replicated, and I believe there’s a lot to be hopeful about,” he said.

Explaining what drew him to technology, Bradbury said his family has helped shape his passion here: “My son developed arthritis at the age of five. My wife, who I met while she was working as a coder and is even more nerdy than me, worked with Great Ormond Street Hospital to try and see what would help and she found out a lot of really amazing stuff. After a few years we were able to get him off the drugs, and improve his condition through a mixture of diet and physical therapy.

“When we’re thinking about invention it’s not about the technology itself; it’s about popular culture, history and personal experiences. Those are the things we remember.”