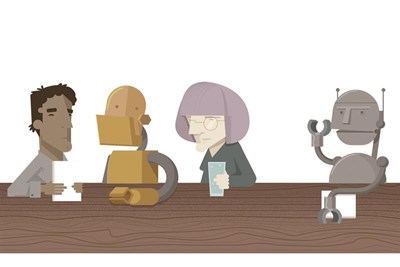 I note most of the positive comments in this piece are from organisations which have a vested interest in promoting automated decision making systems. How are the GDPR conditions going to impact on ...

Automation, AI and algorithms have been steadily creeping in. But can they work for recruitment?

In 2020 the most valuable member of your HR team isn’t going to be your learning and development specialist, your head of employee relations, or your reward lead. This team member will never grumble about their workload. They will work efficiently behind the scenes performing tasks in seconds that it would take others hours to complete. That’s because the most valuable member of your team in the future is going to be a machine, specifically a computer algorithm.

Over the last few years a slew of different apps and computer software programs have made significant inroads in HR departments around the globe. Many of these focus on the recruitment process, promising to help HR professionals make better decisions more swiftly.

The reason these recruitment programs have gained traction is largely down to the cost of hiring – more importantly the cost of hiring the wrong people. Alistair Shepherd, founder of Saberr Base – an online profiling tool designed to predict how well teams will work together, came up with the idea for the product while studying at Harvard under an American academic called Noam Wasserman. Wasserman had discovered that 85% of venture-backed start-ups fail, and more interestingly 63% of those failures could be directly attributed to their team dynamics.

“When one of the only things you can control as a start-up founder is who you hire, why were team dynamics the biggest contributing factor to failure?” asks Shepherd. “People are typically 70% of the costs of business in mature economies and the major source of competitive advantage. However, decisions on hiring are still driven by the gut, and while gut instinct can be good it can often be mixed with gut prejudice. Companies now have the ability to apply the same rigour to decisions about people as they do to product or financial decisions. Collecting the right kinds of data and analysing them can help make better decisions.”

Making the switch from potentially unreliable gut feelings to more informed “data-driven choices” using “just enough” technology gives companies “the best hire, every time you hire”, according to Rachel Chalmers, VP of marketing at Unitive, which has developed HR software that aims to eliminate bias in hiring.

“Any HR team can benefit from system-wide technologies that help them make data-driven, logical decisions at every step of the process, from start to finish,” says Chalmers. “We’re frequently called in by companies that have completed unconscious bias training and think ‘now what?’ Our hiring platform can do for hiring what Expensify does for employee expenses. Software that tactfully nudges you to do the right thing improves compliance and employee experience.”

In addition, some of these new recruitment programs eradicate functions that occupy far too much time. Take the example of graduate recruitment app Headstart. “At the moment some companies outsource the reviewing of thousands of CVs,” says Headstart co-founder Nick Shekerdemian. “Using Headstart companies only have to review 100 CVs in ranked order of suitability, so we’re removing some of the more mundane tasks.”

The streamlining of volume recruitment using technology makes perfect sense. However, some HR experts are concerned about the way that many companies are using these new tools. “One of the first things people misunderstand about automation is you should only use it because you have a high volume,” says Charmi Patel, associate professor of international HR management at Henley Business School. “So it works beautifully well for graduate trainee programmes, but you can’t use it at all levels of the organisational hierarchy because it only taps into certain aspects of competencies.”

It’s a view shared by Tomas Chamorro-Premuzic, professor of business psychology at University College London. He says this technology should not just be used as a vehicle for capturing as much data as possible; the trick is to think carefully about which data sets will genuinely aid the recruitment process.

“That data can be useful or not, people can interpret it correctly or not, and then they may act on it or not,” says Chamorro-Premuzic. “So I wouldn’t blame technology or data, but if people expect data to solve their problems they are just deluded. Most organisations have more data today than they can understand or use. The tail should not wag the dog, and it’s not about size or volume. Good data used appropriately is what we need to make HR more evidence-based.”

The best outcome will always result from a combination of technology and human judgment, feels Chamorro-Premuzic: “For example, the average computer-generated algorithm could probably outperform the average human judge when it comes to making interview decisions, so we could replace all human interviewers with digital interviews. However, the result would still not be as good as having really well-trained human experts analyse well-designed interviews with the help of computer algorithms,” he explains.

Saberr’s Alistair Shepherd agrees that technology works best when it is used as a complementary tool rather than in isolation. “Humans are more complex than machines,” says Shepherd. “HR people work hard to understand context, emotions, conflict, values and practicalities. We’re being told that humans need to understand technology, but the rhetoric of the future will be technology needs to understand humans. It’s not about being correct it’s about being caring.”

That’s why one of the key challenges HR professionals face over the next few years is getting up to speed with technological changes, because if you’re not you are potentially missing out on opportunities, according to Catalina Schveninger, group head of resourcing for Vodafone.

“It’s hard because we’re not trained to be writing code or looking at apps,” says Schveninger. “We’re trained to do psychometrics, psychology and coaching, so we have to reinvent ourselves as a function to stay current and not everyone is comfortable with that.”

She says that Vodafone is experimenting with a number of recruitment tools, and she thinks the use of technology by HR teams is only going to increase.

“Technology in the last couple of years in the recruitment space has changed tremendously,” says Schveninger. “I started in this role three-and-a-half years ago and half the technology I’m using today didn’t exist back then. Although the HR function came relatively late to the table, because a lot of this technology was already being used for marketing, sales and retail, we are playing catch up and are going quite fast in the right direction.”

So consider yourself forewarned: the day when the best member of your HR team is a machine and not a human being is approaching fast.

I note most of the positive comments in this piece are from organisations which have a vested interest in promoting automated decision making systems. How are the GDPR conditions going to impact on this? For example, the right to object to automatic decision making and the right to insist on human intervention will cause major problems for those organisations which rely on this form of decision making. These obscurely algorithmic systems, which normal HR professionals will not have a clue about how they work, may well become white elephants in the future rather than a valuable member of the team.