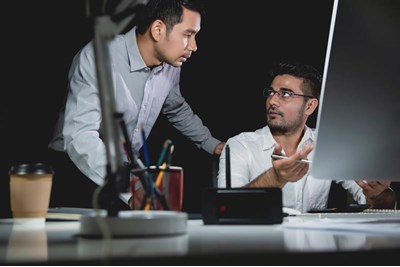 This showed little improvement from 2012, when Pakistani and Bangladeshi workers suffered pay gaps of 18.9% and 21.6%. These groups were found to constitute the lowest proportion of employees in the highest pay quartile, with just 13% in top-paying jobs.

Meanwhile, employees in black African, Caribbean or black British, other, and white other ethnic groups on average earned 5% to 10% less than their white British counterparts between 2012 and 2018.

The research also looked at ethnicity pay gaps on a regional basis. London was found to have the widest ethnicity pay gap, with BAME workers paid 22% less on average than white employees. This was followed by the North-West, where the gap is 17%, Yorkshire and the Humber (15%), and the East Midlands (10%).

After introducing mandatory gender pay gap reporting the government is considering also requiring companies to publish data on wage disparities between ethnicities. A public consultation on this ended in January and already some firms, including PwC, Deloitte, KPMG and ITN, have voluntarily decided to release their own numbers.

Ben Keighley, co-founder and director of social media recruitment platform Socially Recruited, warned that the pay gap is having a damaging effect on the economy. “As with the gender pay gap, the ethnicity pay gap is under-reported and just as damaging to the economy,” he said.

Keighley added that diverse businesses are proven to be more successful, and called on the government to make ethnicity pay gap reporting compulsory: “Studies have shown again and again that companies that are diverse and reflect the make-up of wider society – in terms of gender and race balance – are more economically successful.

“There should be compulsory reporting of the ethnicity pay gap in the UK, as called for in Baroness McGregor-Smith’s Race in the workplace report in 2017, because we cannot address what we cannot monitor.”

TUC general secretary Frances O'Grady agreed that the government must take action in the form of mandatory reporting. “The harsh reality is that even today race still plays a real role in determining pay. TUC research has shown that far too many black and minority ethnic workers are stuck in insecure and temporary work, which not only has a huge impact on their life chances but also widens the pay gap," she said.


“This problem isn’t simply going to disappear over time. Ministers must take bold action to confront inequality and racism in the labour market. The obvious first step is to introduce mandatory ethnicity pay gap reporting without delay.”

To reduce the gap organisations must reassess their D&I policies and introduce affirmative action, said Hephzi Pemberton, founder and CEO of Equality Group. “These statistics have unveiled the true extent of the problem ethnic minority professionals are currently facing and I hope this report will make businesses seriously re-assess their equality and inclusion policies,” she said.

“Fixing the ethnicity gap requires a huge amount of work for every business – it’s not only a cultural change but a practical shift in the make-up of senior executive leadership teams. However, businesses need to address their current policies and produce affirmative action and enforcement measures to ensure sustained action and progression towards equality.”

Ruby Dinsmore, principal lawyer in the employment team at Slater and Gordon, said that the underlying issues behind ethnicity pay gaps are multifaceted: “The ethnicity pay gap is much more complex than the gender pay gap. There are many more factors to take into account, which makes addressing the imbalance more difficult..."

"The pay gap between white British and other ethnic groups is generally smaller for younger employees than older staff [for example]. This means an absence of role models in senior positions and the possibility BAME staff do not feel confident putting themselves forward for these roles."

But despite the complexities of the issue, employers must not shy away from taking action, Dinsmore said: “Ultimately, many BAME staff with equal qualifications and skills do not progress at the same rate throughout their careers as white counterparts. This is not only bad for employees but bad for business – employers are ultimately losing out on key talent. While we are moving in the right direction much more needs to be done and now.”