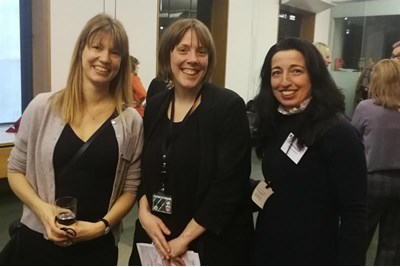 MP Jess Phillips (centre) at the launch of the report

In the 1980s I worked for a global US owned multinational .... as Training Manager I led the inhouse YTS programme for admin, technical, A teamers, and we had a separate graduate programme. I ...

We must end outdated employment practices that disadvantage women, said Labour MP and co-chair of the Women and Work All-Party Parliamentary Group (APPG) Jess Phillips at the launch of a new report

The APPG’s report, How to Recruit Women for the 21st Century, took evidence from a number of organisations in the public, private, and voluntary sectors to make recommendations to improve the recruitment of women. These include obliging companies publishing gender pay gap data to break this data down into further categories such as age, ethnicity and disability, and potentially extending this reporting to smaller companies. It also called for the strengthening of the Equality Act, and broadening the number of people who can access the apprenticeship levy.

The report is designed for employers to use as a toolkit for attracting, recruiting and supporting more women into the workplace. It advises employers on advertising roles as open to flexible working and on reducing unconscious bias in interviews and job adverts.

It also recommends that employers offer returnship programmes to train women and other returners in the latest progressions in their fields, and that employers run outreach initiatives encouraging more women to work in traditionally male-dominated sectors.

“I am only too aware of the barriers facing women and facing children in this place [parliament], and facing anyone who wants to lead a normal life... We have got to stop saying this is what we want," said Phillips. "I hope this report will be listened to, and that the time for saying ‘we have got to change’ will soon be over – the time to change is now.”

The Recruitment & Employment Confederation (REC) was among those giving evidence, with the APPG accepting its recommendations on broadening the apprenticeship levy so it can be used as a training and skills levy to upskill those including contractors, freelancers and agency workers.

The report also calls for the government to launch an apprenticeship bursary fund to provide access to training to the poorest women and other under-represented groups, as well as support with transport costs for apprenticeships.

“A lot of employers have not been happy with the adoption of the apprenticeship levy for a number of different reasons; flexibility being a key one. A lot of temporary workers in key female-dominated sectors can’t benefit from training or apprenticeships, and are being shut out as a result,” Sophie Wingfield, head of policy at the REC, told HR magazine.

She added that employers should look at every stage of recruitment to ensure a fair hiring process: “The most important thing for employers is to make sure that flexibility runs right through the recruitment process, all the way from job design to how you interview your candidates, and what impact all those little changes can have on outcomes when it comes to improving diversity.”

In the 1980s I worked for a global US owned multinational .... as Training Manager I led the inhouse YTS programme for admin, technical, A teamers, and we had a separate graduate programme. I designed, implemented and delivered within this business which was light years ahead of the UK in terms of employee engagement, development, communications ... you name it ...the first Women Returner Programme to upskill women returning to the workplace and asssist them back into employment. What happened to all that? Over a period of time the entire YTS programme and NVQ system was tinkered with and totally devalued. Next, traditional apprenticeships were tinkered with and devalued with 'modern apprenticeships'. The choice to have a family is an individual one and it is up to individuals to plan how that will work for them. Many only want to work 10 to 3 term time only; I still await someone coming up with the answer to who will fill the 8.30/10 and 3/5.30 slots please? Ditto working school holidays only? Oh, that'll be a casual contract - now known as 'zero hours' and someone else's problem. Agile businesses are looking for agile employees, those with the skills, knowledge, experience, aptitude and ability to engage with and contribute to the success of that business.

Hi Carol, wise words - such insights are out of fashion these days and beyond the wit of most of the HR press. You hire people because you need stuff done, and for many industries, you need it done at certain times - not because it might suit them and they could do with the money.

Should BAME acronym be axed?