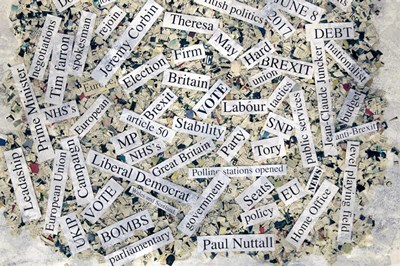 ​With just two weeks to go until the UK heads to the polls, here's the latest employment and HR-related policies from the Conservatives

Prime minister Boris Johnson said Britain faces a choice between “destructive socialism” and “sensible One Nation Conservatism", as he pledged tighter immigration controls during the launch of the Conservative party's general election manifesto on Sunday (24 November).

Johnson confirmed that the party would introduce a 'firmer and fairer' Australian-style points based immigration system. This will require most people to have a clear job offer before they arrive, reduce the number of lower-skilled immigrants coming to the country, and treat EU and non-EU immigrants equally – including not allowing them to access unemployment and other benefits for the first five years.

The manifesto said the party hopes to actively recruit 'leaders in the field' to come to the UK – including the best technology and science graduates and winners of top scientific prizes.

On Brexit, the manifesto committed to the UK leaving the EU no later than January 2020. It also said that the post-Brexit transition, during which the UK will continue trade relations with the EU, would not be extended beyond the end of 2020.

Johnson also announced that the party would introduce a National Skills Fund as the first step towards a “Right to Retrain” scheme.

This would include an investment of £600 million a year, equalling £3 billion over the parliament term.

This proposal echoes similar pledges to boost skills and training by both Labour and the Liberal Democrats.

Workers will have the right to request a more predictable contract and a single enforcement body on labour standards, the manifesto said.

Johnson also pledged to recruit 50,000 more nurses, but came under criticism after the plans turned out to include the 18,500 existing nurses the government hopes to persuade to remain in the workforce.

The government would raise the threshold for paying National Insurance Contributions (NICs) from £8,632 to £9,500 in April 2020, with an ultimate ambition to raise it further to £12,500.

Other policies in the manifesto include:

Mark Dawe, chief executive of the Association of Employment and Learning Providers, said he welcomed the pledge to boost skills and training.

“AELP warmly welcomes the additional funding promised for skills, because Brexit means that we need to train or retrain more home-grown talent. All three main parties appear committed to some form of skills account for individual learners which we would consider a positive step with the right to train or retrain," he said.

"Equally positive would be the establishment of the £3 billion National Skills Fund if it is allocated correctly to employers and learners to encourage good quality training provision."

However, Paul Johnson, director of the Institute for Fiscal Studies (IFS), said that the manifesto lacked significant policy action.

"If the Labour and Liberal Democrat manifestos were notable for the scale of their ambitions, the Conservative one is not. If a single Budget had contained all these tax and spending proposals we would have been calling it modest. As a blueprint for five years in government the lack of significant policy action is remarkable,” he said.

"In part that is because the chancellor announced some big spending rises back in September. Other than for health and schools, though, that was a one-off increase.

"Taken at face value today’s manifesto suggests that for most services, in terms of day-to-day spending, that’s it. Health and school spending will continue to rise. Give or take pennies, other public services, and working age benefits, will see the cuts to their day-to-day budgets of the last decade baked in."