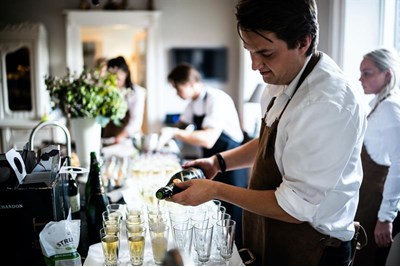 The government-sanctioned lockdown will impact young workers the hardest, according to a new report for Institute for Fiscal Studies (IFS)

Its analysis found employees aged 25 and under were nearly two and a half times as likely to work in a sector that is now shut down due to social distancing measures as other employees.

This compares to just one in eight (13%) of workers aged 25 and over when full-time students with part-time jobs are excluded.

There was also a gender variance in the workers likely to be impacted.

One in six (17%) of female employees were in sectors likely to be shut down, compared to one in seven (13%) of male employees.

IFS research also found low earners were seven times as likely as high earners to have worked in a sector that is now shut down.

Thirty-four percent of employees in the bottom tenth of the earnings distribution work in sectors directly affected by the lockdown, compared to just 5% of those in the top ten.

Yet the lowest earners are more exposed to the direct impacts of sectors shutting down than higher earners, the research found.

However the majority of affected younger workers and lower earners live with parents or others whose earnings are less likely to be affected, meaning they may suffer smaller hits to their living standards than otherwise.

Sally Hopper, assistant HR director at Hertfordshire County Council, said HR can help those most at risk by giving them clear and regular messages about how their pay and other conditions are being managed.

She said: “This includes information if an employee has been furloughed on what it means for them and whether the employer will top up the 80% or not. With a lot of messages and advice available, I would recommend turning to gov.uk or ACAS for clear and definitive advice on how you can get support.

“If your employment has ended and you are seeking work, you may like to consider an alternative career, for example public sector and food providers are recruiting right now. Looking after your mental health and wellbeing has to be a high priority too and Mind is a great website.”