The role of people-centric groups in organisation design 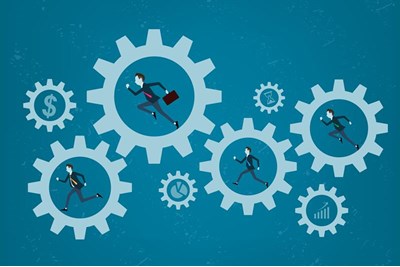 Companies are increasingly looking to radically transform their organisations. The two most popular areas of focus are horizontal teams and reducing or even abolishing hierarchy.

However, this article explains that the greatest opportunities can arise from melding existing structures with communities and networks. These groups rely on people coming together to identify the work they are intrinsically motivated to perform. In addition new opportunities for developing digital networks arise from utilising platform- or even blockchain-based
forms of organising.

Employers have traditionally organised themselves as hierarchical functions and divisions. These structures group people into similar vertical categories of activity (manufacturing, marketing, HR, etc.) co-ordinated through layered reporting relationships. This is generally an efficient way to organise but does not naturally prioritise agility, customer focus or employee satisfaction. As a result many firms have been looking at alternative forms.

The most popular alternative is horizontal teams. These group people according to horizontal pieces of work, including processes, projects and Agile sprints, which focus on meeting customer needs or other organisational objectives. These groups generally involve either people from a mix of functions working together or people able to work across functions.

In many sectors, such as professional services, projects have always been a core way of organising. However, the dramatic shift towards Agile ways of working in recent years has made horizontal teams much more common. Good examples of horizontal-team-based organisations are Cleveland Clinic and ING Bank.

Many companies will want to organise in a number of different ways at the same time. This is why the other popular type of organisation is the matrix, in which people work in units that report to two groups – for example a project and a function. Matrices receive a lot of criticism but if designed well they can operate fairly simply and effectively.

Some businesses have also been adopting other organisational innovations, in particular aiming to become flatter by allowing teams to self organise (Laloux, 2014). Many more specific organisation models are adaptations on the above. For example, holacracy (Robertson, 2015) is at its heart a heavily-formalised approach to self-managed horizontal organisation.

From an employee perspective hierarchy may not always contribute towards a positive experience, but other issues are generally more important and easier to fix. In particular, the most important thing for many organisations is ensuring that line managers act as coaches rather than dictators.

My experience over the past 20 years, based on consulting projects and conversations with practitioners, in addition to research for my latest book (Ingham, 2017) suggests that the greatest opportunity lies in the use of more people-centric organisational groups.

There are three types of people-centric group becoming more common. These are communities, distributed networks and platforms. And they all enable organisations to bring people together around things they are passionate about. Doing this creates opportunities for people to identify work they want to do, rather than simply being allocated work that needs to be done. It therefore calls on intrinsic rather than extrinsic motivation, enabling people to harness their full potential for the benefit of their individual performance and organisational contribution.

Communities look inwards at supporting and enabling members. They are often supported by community managers (really facilitators) who help connect and cultivate relationships between members. ‘Community’ is a term used for many different types of group. For example, Mark Zuckerberg refers to ‘the Facebook community’ (all 2.7 billion members). However, true communities tend not to include more than about 100 people so that all members can develop close relationships with most others.

HR has long used communities of interest or practice to bring people together to support their joint learning. However, organisations are now encouraging these groups to be more proactive, creating what I call ‘communities of performance’. As an example, centres of excellence are being replaced by communities of expertise in some organisations. These tend to be more focused groups than the previous centres, still providing a home for the relevant specialists but perhaps only part time, and also including people from other areas with a particular interest in the community’s domain. Examples include DaVita, Buurtzorg and Spotify, where Agile teams (squads) are complemented by communities (guilds).

Leaders and managers cannot instruct a community but can bring one together, facilitate it, and encourage it to think what it might be able to achieve for the organisation. However, these activities need to be ones that community members are passionate about. Using communities is therefore potentially most suited to the knowledge era.

Like communities, networks provide opportunities for members to co-operate to undertake useful work for the organisation. However, networks tend to be larger than communities meaning that people cannot have the same close bonds and any responsibilities are more distributed. Therefore, rather than looking inwards networks look outwards, promoting the needs of a domain to the rest of the organisation. Networks are particularly common in change management, although some organisations are broadly networked too. For example, WL Gore and Morning Star.

Networks can also extend outside the organisation, creating ecosystems consisting of numerous organisations (Yeung and Ulrich, 2019). Both internal and external networks are often supported by process, technology and cultural platforms (e.g. a common set of values), which help members navigate the network efficiently.

Organisations can combine communities and networks with each other and with functions and horizontal teams through the use of ‘melds’, which are the modern less formal equivalents of matrices. Melding is about allowing multiple organisation forms to sit on top of one another, without the need for formal organisational mechanisms. Common examples of melds are the core and periphery organisation (where a community acts as the hub of a broader network), and the network of teams in which horizontal teams are linked through a network rather than a traditional programme management structure.

Most distributed networks benefit from technology-based platforms. For example, an enterprise social network such as Yammer, Jive/Aurea or Workplace by Facebook. However, it is also possible to use new digital platforms such as Catalant or InnerMobility by Gloat, which have been especially designed to help people work together. These platforms can be used internally to provide additional opportunities for staff to volunteer for particular roles or projects, gaining broader experience and responding to their personal interests or helping to develop their careers. They can also be used externally, tapping into a broad pool of contingent workers who may be interested in undertaking a particular task or project. Examples of organisations using such platforms include Shell and Unilever.

Organisations can also come together through a platform to create a new digital ecosystem. Haier is probably the best example of this (Hamel and Zanini, 2018).

In addition, there are now opportunities to use blockchain-based platforms like Colony to contract with workers and pay them using blockchain tokens. These platform- and blockchain- based organisations provide very new opportunities for even more innovative design and we will need to see how they develop over time. However, they do continue the shift towards people centricity, potentially providing the best opportunity to combine the needs of an organisation and individuals.

HR and organisation design professionals need to think creatively about these new opportunities to organise differently. Note, however, this is not just another call to move ‘from hierarchies (i.e. functions) to networks’. Every organisation is different and so the right design will be different.

Companies should therefore always seek to ensure they have clear objectives before they embark on any organisation redesign or transformation. These objectives should include the people and organisational outcomes (human, social and organisation capital) that are to be created; principles that define how the organisation should work; and the needs or expectations of employees. Employers should think creatively about a range of organisational options before picking the best solution. However, in many cases companies will want to incorporate communities and networks or platforms alongside existing functions and horizontal teams in melded organisations.

It may be helpful to repeat that reducing hierarchy or introducing self-management is not normally the greatest new opportunity for organisation design. Reducing hierarchy is best seen as a consequence of good design, not its objective. Horizontal teams are flatter than functions and communities and networks are flatter still – often completely flat. So as companies introduce more innovative organisation architectures they tend to find levels of hierarchy fall.

It is also important to note that organisation design should never just be about structure. Therefore companies will often want to make aligned changes to other elements of their organisations. For example: their people’s skills, behaviours and relationships, their processes, and the physical and digital workplaces people use to do their work.