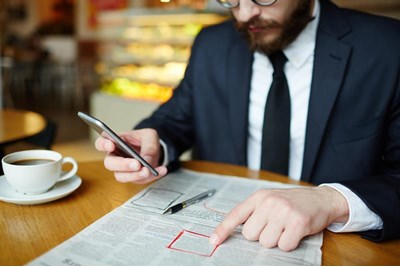 A record 253,000 people moved from self-employment to employment in the second quarter of 2020 suggesting that workers are seeking more job security due to the coronavirus pandemic.

The move towards employment increased by 81,000 compared to the second quarter of 2019 which saw 172,000 people make the switch.

Between the first and second quarters of 2020, at the height of the pandemic, only 6% of people changed occupation, yet over half (53%) of those that did also switched their major industry, suggesting that they were seeking a career change as opposed to promotion.

The ONS suggested that the disproportionate effect the pandemic has had on some industries, like travel and hospitality, could have encouraged some peoples’ decisions to change their major industry.

The latest data from LinkedIn appears to support this trend according to its UK country manager Josh Graff.

“Today’s [ONS] figures underscore the fact that we’re facing the toughest labour market in a generation. LinkedIn’s latest data shows that although hiring in the UK has been steadily improving since the steep decline we saw when lockdown measures were put in place, it’s still down on this time last year,” he said.

“Competition for roles has increased three fold and […] workers in the hardest hit industries are looking to other sectors as they seek out new opportunities.”

ONS data showed switching occupations between the first halves of 2019 and 2020 showed a slight increase of 0.4%. It said that this could be due to the effect of the government's job retention schemes, which could be masking the true scale of UK unemployment, and predicted that the rate of occupational switching may rise as support unwinds in the months leading to 31 October.

He said: "Yesterday’s ONS report revealed a slight increase in the number of people changing occupation in the second quarter of this year. Though this is a trend which is likely to become more prevalent as employment support, such as the UK’s Job Retention Scheme, comes to an end."

In a survey from April, Totaljobs found 70% of UK workers said they have considered working in a different sector due to COVID-19, and a quarter said they expect to switch industries within the next year.

A desire for increased job security was the reason 32% of survey respondents said they were considering a career change in a different industry.

For Simon Kerr-Davis, counsel at Linklaters employment and incentives practice, he ONS figures are unsurprising. “In times of uncertainty, the perceived job security of employment status has much more appeal than the flexibility offered by self-employment,” he told HR magazine.

Yet he warned employees to be mindful of the perceived security offered by working for an organisation, as the statutory notice period for under two years’ service is just one week.

He added: “The right to a redundancy payment and protection from unfair dismissal also have service requirements and will only apply after two years’ service. There are some “day one” rights for employees which are significant, such as protection from discrimination and from suffering a detriment as a whistleblower, but these rights are also available to self-employed people who provide their services as “workers.”

The ONS Coronavirus and occupational switching: January to June 2020 is based on data from the ongoing annual Labour Force Survey.