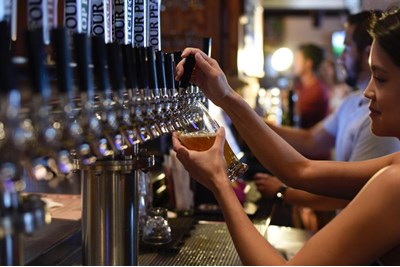 ​The UK hospitality sector could face around 320,000 job cuts as businesses attempt to recover post-coronavirus.

With the majority (around 60%) of the UK’s pubs, hotels, restaurants and cafes planning to reopen from 4 July, trade body UKHospitality estimates 960,000 staff members are expected to return to work over the course of July.

By the end of September, it expects over 1.6 million people to have returned to their jobs in the sector.

Pubs and bars responding to the UKH reopening survey had the highest opening rate on or within a few days of 4 July at 53%, followed by 47% of restaurants, and 16% of accommodation.

Yet Kate Nicholls, CEO of UKHospitality, warned that the sector is ‘not out of the woods yet.’

Speaking to HR magazine, Nicholls said: “Almost one million staff members going back to work in July shows how hard businesses have worked to get themselves ready to open.

“The fact that we are also expecting a substantial number of job cuts highlights just how hard this sector has been hit. We were one of the first to be affected by the pandemic and it is going to take time for the sector to emerge fully from this crisis.”

Though Nicholls noted that businesses are eager to reopen, she added: “It is still going to take a lot of hard work and further support from the Government to get through this.”

Changes to the Coronavirus Job Retention Scheme (CJRS) on 1 July meant that employers can bring furloughed employees back to work for any amount of time and any shift pattern, while still being able to claim grant money for the hours not worked.

The CJRS will end on 31 October 2020, and from the end of July until then, employers will have to pay increasing contributions towards their employees wages.

For Eugenio Pirri, chief people and culture officer at hotelier Dorchester Collection, these changes mean some businesses will still struggle.

Pirri told HR magazine: “As an industry, we are very pleased to see many of our hotels, restaurants and pubs reopen to the public and welcoming back our people means everything to us. However, sadly, there are many in the industry that will be unable to sustain all of their workforce due to the curbing of the CJRS. This was a vital lifeline to so many businesses whose revenues became non-existent.”

Already SSP Group, the owner of Upper Crust sandwich chain and Caffè Ritazza, said that it may have to cut up to 5,000 jobs, around half of its workforce, in the UK due to the slow recovery of the economy, especially in the travel sector which has had a knock-on effect on trade.

The parent company of hotel chain Signature Living has also gone into administration, affecting jobs at its hotels in Liverpool and Cardiff.

Julian Cox, partner and employment law specialist, at BLM, added that a lack of government guidance could also be partly to blame for some business’ demise.

He said: “This lack of specific guidance and the knowledge that numbers could be less than half due to social distancing, means many in hospitality – from Upper Crust to Café Ritazza – are taking the plunge and making redundancies before they have to begin topping up furlough payments with cash they don’t have.”

“For HR teams faced with this prospect, caution is advised at every stage of the redundancy process. Common pitfalls can leave companies exposed to unfair dismissal claims and employment tribunals, which could devastate businesses making large scale job cuts.”

Pirri added: “Our industry must unite and support each other by promoting our establishments and adhering to all government guidance. Only by doing this, can we ensure long term sustainability that can continue to grow in the years ahead.”

UKHospitality’s reopening survey collected responses from over 15,000 venues, employing over half a million staff in the UK.