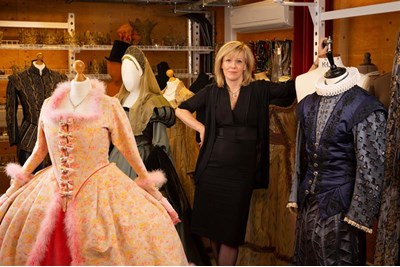 Its HRD Jo Pitman wants to see a workforce as diverse as its performances, and HR has a leading role in achieving that

Row after row of beautiful multi-coloured fabrics, painstakingly-embroidered bodices, hats and fabulous feathered headdresses... It’s the sort of place you could get lost in for days.

So too is the rest of the labyrinthine backstage area at The Other Place theatre – one of three of the Royal Shakespeare Company’s (RSC) Stratford-upon-Avon venues. As HR magazine and director of HR Jo Pitman leave the costume store we enjoy a baffling five minutes of going up and down in service lifts, only to emerge each time exactly where we didn’t think we would.

So the scale of the organisation and what it does is immediately apparent. Pitman explains as we’re leaving the store that not many of these circa 4,000 costumes are ever likely to be used in another RSC production. Rather they’re hired out to other theatres and for special fancy dress occasions. She explains that every costume for a new RSC production is meticulously designed and made to fit each actor, and each director’s particular vision. Even actors’ underwear is made to measure and, typically, is in keeping with the rest of their period dress.

No detail is too tiny. Which takes a workforce larger – at around 700 full-time and 300 freelance staff, based mostly in Stratford but around 30 in London – than most people might realise, explains Pitman, who points out all the various RSC offices, located in Stratford’s picturesque cottages, as we walk between The Other Place and the RSC’s main waterside theatre building – housing the Royal Shakespeare Theatre and the Swan Theatre.

What many people also don’t realise, Pitman adds, is just how diverse the RSC’s output is. Many of its performances each year (27 in 2018) are new works covering a plethora of genres and themes – from Oppenheimer (exploring the physicist’s race to develop the first nuclear weapon), to this year’s Christmas production: an adaptation of A Christmas Carol. Which means diversity of talent is a critical issue for the organisation.

When Pitman arrived from Cherwell District Council and South Northamptonshire Council in April 2017 she found an HR offering typical of many performing arts organisations. “When I landed I didn’t have one permanent full-time HR manager,” says Pitman, adding that “in theatre an HR department has historically been a luxury. Money tends to go into the productions.”

This meant many processes were very informal, including hiring, which often took “a little black book” approach. So the challenge has been to “make [managers] believe they should dispose of their little black book”.

Which isn’t just a mission to attract better talent through accessing a wider pool. Top of Pitman’s priority list since arriving 18 months ago has been a push to eventually broaden the diversity of people working for the RSC.

“It’s a real problem for us and not one we can easily remedy,” she says. “Our immediate area is predominantly white middle class, and Stratford isn’t an easy place to access”.

“But we want to reach out and get people from currently under-represented groups because we genuinely believe that we’ll be all the richer for getting far more diverse contributions to what we’re ultimately putting on in the theatre.”

The organisation has made great strides in on-stage diversity, says Pitman, thinking creatively and laterally around casting women in traditionally-male roles for example. But now the demographics of the backstage workforce – which includes those working with schools in the education outreach department, designers, dressers, front of house staff and restaurant caterers – must catch up.

The first step has been to launch a new applicant tracking system that “offers the ability for us to analyse diversity data”, reports Pitman. “So we can see how many people we’re getting from particular minority groups… We’ve only just started getting that data, but we can now start drilling down and saying ‘OK what does this tell us about particular occupations in the organisation?’”

What the new applicant tracking system is also designed to do, says Pitman, is give both internal hiring managers and applicants a much more professional candidate experience. While the assumption that people of all professions would be fighting each other to work at the RSC is correct, she explains, this doesn’t mean the organisation always attracts the diversity of talent it needs; or those with impeccable functional expertise as well as passion for theatre.

“We sometimes get the wrong people apply to jobs; their motivations aren’t necessarily right,” says Pitman. “We get people who are interested in theatre and the performances themselves, and yes ultimately that’s what we’re here to do. But actually I want a good HR person, I need an accountant to be a great accountant…”

She adds: “I see my role as being about raising the profile of the RSC as an employer of choice; such that it’s equal to our reputation as an arts organisation.”

Pitman can’t be accused of not practising what she preaches in terms of professionalising her own function. Now the HR team is 10-strong: comprised of three HR managers (two focusing on employee relations and one on recruitment, retention and employment branding), an organisational development manager, a training and development officer, an HR advisor, three support roles and Pitman’s PA.

Pitman describes gaining more respect for the importance of HR in the organisation as “pushing at an open door”. While resource will always be tight thankfully executive director Catherine Mallyon very much “gets it”.

No small factor in HR’s rise has been the crescendoing topic of sexual harassment and bullying in the performing arts over the past few years; most notably in relation to allegations last year that Kevin Spacey sexually harassed young men connected with The Old Vic during his tenure as artistic director. This is something the RSC has by no means been immune to in terms of case work coming HR’s way over recent years.

In fact helping the organisation to respond effectively in the current climate and up its game was one of the key things that attracted Pitman to the role – which also encompasses health and safety, the RSC Nursery (looking after children of employees and from the local community), and safeguarding.

“Obviously I was interested in the organisation, but mostly I was attracted by where I could take it and by that safeguarding responsibility,” says Pitman. “I’d had experience of that in my former role but this was to be the accountable person.”

Pitman explains that the theatre had started to tackle the issue long before she joined. But the trick is to continually ingrain speaking up against unacceptable behaviour. Regarding why theatre, and the performing arts more widely, have a particular problem Pitman draws the analogy of high-pressure kitchens environments where people just expect certain treatment.

“And people are frightened in the [theatre] industry because we have a workforce that is so fluid; particularly on the acting side. Particularly the younger actors just starting in their careers and wanting to make it, they don’t want to jeopardise their future,” she explains.

So encouragement to speak out must be particularly strong, says Pitman: “We have a Welcome Book that goes to everyone who works for or with the RSC. Because we’re so heavily dependent on freelancers we want to give a strong message right at the beginning of their engagement with us about what we’re expecting from everyone.

“And we’ve got what I’d call the standard building blocks: a bullying and harassment policy, a whistleblowing policy… We’ve got all the kit that every decent employer should have,” she adds.

“But I would still say that isn’t enough. Any good HR team can write a bullying and harassment policy. It’s actually about how the organisation leads by example and implements that policy. That does mean making examples of perpetrators to show no-one is above this.”

It also means strong continuous messaging from the very top, adds Pitman. “Catherine, Greg [Doran, artistic director] and Erica [Whyman, deputy artistic director] put out a public statement both to staff and the wider theatre industry to say: there’s no place for bullying and harassment in our organisation or indeed in the theatre industry, and we’ll do whatever we can to stamp it out. We did see a response to that. Over the course of this year we’ve had people who have tested the organisation.”

Which has inevitably proved a challenging time for Pitman’s team. As such HR leaders must make sure their teams dealing with these kinds of issues are supported, she says.

“You will unfortunately, but understandably, get people in organisations who throw in the bomb and then want to walk away when the realisation comes that the stakes are really high. And so my team are doing the most unpopular job when faced with having to go back to someone and say ‘someone wants to retract that complaint’. That’s hard. And who ends up with the bad reputation in all of that? HR. So my job is to think about the impact these cases have on my team.”

HR leaders must be mindful of how stressful working in HR can be, adds Pitman. “I think modern HR is probably one of the hardest and loneliest jobs,” she says. “Chief execs will often say their job is the loneliest. I wouldn’t deny that, but in HR you’re constantly managing your risk and juggling that on a daily basis…”

She adds: “We would of course expect our HR generalists to have a decent knowledge of employment law. But in sexual harassment and bullying cases people are quick to commission lawyers on their behalf. So our HR professionals aren’t just dealing with complainants but lawyers.”

A large part of providing the best conditions for her team is about trusting and empowering them to do what they think is right, says Pitman. “I say to them: ‘I can’t be operational as well as have the strategic overview. You’ve been appointed as managers so manage. If you want to talk to me about your proposals, great.’ That’s me having trust and confidence in them, enabling them to run the HR department operationally as they see fit.”

Pitman’s pet HR peeve has always been practitioners who rely obsessively on rigid procedure rather than taking the initiative in supporting their organisation. She cites the specific example of formal letters to staff.

“Obviously performance and redundancy are enshrined in a lot of legal principles, but I always say to my teams ‘how would you feel if you received that letter?’ And that should be your test… Because we’ve got our package of standard letters that we keep churning out, without saying ‘actually we can do better than this, we can be more human’. I tell my team: ‘if you see something that doesn’t reflect the RSC then change it, you’ve got permission’.”

Pitman describes herself as “lucky” to work with “a wonderful team” who she’s been able to build around her and who live and breathe this approach. Which means the only way is up now for HR at the RSC, with still much to do.

“We’re focusing more on leadership and management development; we’re also looking at reshaping job descriptions, particularly for managers. This isn’t an issue unique – of promoting managers based on technical skills but not necessarily leadership skills –to the RSC or theatres. Yet it’s so key we get the right people in these roles,” reports Pitman.

“A lot of our managers have historically wanted to deal with employment matters but there hasn’t been the resource to support them. It wasn’t that there wasn’t a will to do it; managers just didn’t have the confidence to tackle things. Issues were left or people were exited,” she adds.

“But now times are changing."