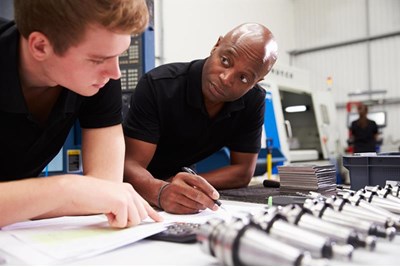 As many as 92% of levy-paying employers want greater flexibility in how they can spend their apprenticeship allowance, according to research from the City & Guilds Group

The survey, of 765 levy-paying businesses in England, found that while employers are keen to make the best use of their levy allowance the rigidity of the current system is holding many back.

The research found that 95% of employers failed to spend the entirety of their apprenticeship budget in the first 12 months of the new system. Additionally, businesses said they only expect to spend an average of 56% of their allotted funds annually in the future.

Almost all employers (93%) cited some form of barrier preventing them from investing in apprenticeships. These included a lack of: suitable apprentices in the area (31%), availability of necessary training (30%), information and support (22%), and buy-in from the board (22%). Meanwhile, 29% of businesses cited the levy's 20% off-the-job training rule as a barrier that stops them from spending more of their allowance.

If employers were given greater freedom around how to spend their levy funds more than half (55%) said they’d like to continue to spend on apprenticeships. Forty-five per cent said they would like to be able to use the funds to invest in non-apprenticeship training – including professional courses and technical skills training (36%); health, safety and compliance training (33%); work placements and internships (32%); and leadership and management training (31%).

The government has introduced some new freedoms in the past year to flex spend, including increasing the level of levy funds that can be transferred to other businesses in a supply chain from 10% to 25% from April 2019.

But City & Guilds said this isn’t enough. The report said that if levy-paying employers could invest as much as they liked within their supply chain they would transfer an average of 35%, meaning current plans for increased flexibility still don’t meet employers’ needs.

City & Guilds warned that without transparent reporting of apprenticeship spending industry bodies, training providers and employers are left in the dark about the true extent to which employers have taken up apprenticeships, and where any leftover money will end up.

Kirstie Donnelly, managing director of the City & Guilds Group, said that investing in skills is “urgent" in light of the economic pressures affecting the UK. "The turmoil we are facing, as a result of uncertainty around Brexit as well as the rapidly-changing world we live in, means that it’s never been more urgent to improve the skills of our workforce and invest in home-growing the skills that we may no longer be able to import from abroad,” she said.

“Apprenticeships have huge potential to deliver on this, but the system is still not responsive enough to the needs of employers. Businesses need more flexibility to use the apprenticeship levy in a way that will truly help them fill skills gaps, upskill their workforce, and shore up their talent pipeline for the future.”

“We have set out a list of 12 recommendations, 11 of which are for the government to act on, as we urge it to prioritise apprenticeships, maintain momentum and make better use of data to help all those involved to create the skilled and productive workforce we so desperately need.”

Currently organisations are waiting for a confirmed date from the government for the employer consultation on apprenticeships announced in October 2018.

City & Guilds and the Institute of Leadership and Management, together with Censuswide, surveyed 765 people with decision-making responsibility for apprenticeships in businesses in England that pay the apprenticeship levy.