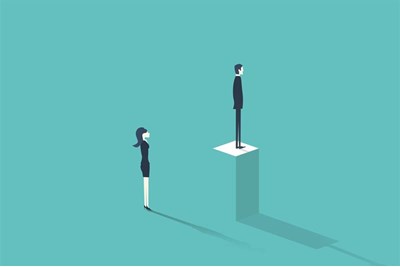 All pay rates should be set for the job and not the person. Most organisations that recognise trade unions have pay scales for job roles rather individually negotiated pay - so that may be the ...

Research finds most women don't know how much male colleagues earn, as Labour pledges to close the gender pay gap by 2030

Most (60%) women in UK workplaces either don’t know what their male colleagues earn, or believe they are earning less than men doing the same job, according to the Fawcett Society.

Its report was released to mark Equal Pay Day (14 November), the day when women effectively start to work for free due to gender pay gaps. It suggests that unlawful pay discrimination may be more widespread than previously thought, and calls for a change in the law to give women an enforceable 'right to know' what their colleagues earn, so that they can challenge unequal pay.

The survey asked women about male colleagues in the same role or a very similar role. Three in ten (29%) women polled said that they had no idea what any of their male colleagues were paid, leaving them unaware of possible discrimination.

Four in ten (37%) women who know what their male counterparts earn reported that those men are paid more. Just 40% of working women said they know they are being paid the same as male colleagues doing the same or very similar work.

Two thirds of women (65%) said that finding out that they're paid less than male counterparts had a detrimental impact on how they feel about their job or employer. This included feeling less motivated (33%) and wanting to leave their job (20%).

Sam Smethers, chief executive of the Fawcett Society, said that progress is still far too slow on equal pay. “Nearly fifty years on from the Equal Pay Act, equal pay for equal work is still a distant dream for many women. Pay secrecy means women cannot know if they are being paid equally and fairly," she said.

“Even if they do suspect a man is earning more it is almost impossible to do anything about it. This is why we are calling for a change in the law. Women need an enforceable ‘right to know’ what their colleagues earn so that they can challenge unequal pay."

Smethers added that everyone has a role to play in ensuring equal pay for equal work, and that doing so would ease the burden on the legal system. “Men can help by simply telling their female colleagues what they earn. It really is that simple," she said.

“This is about much more than money. Women have told us they felt furious, devastated, exploited and undervalued. Pay discrimination has a significant negative impact on how they feel about their employer. A right to know will also reduce waste in the court system, and head off legal action by encouraging employers to settle cases before they get to court.”

The Fawcett Society's report came as Labour pledged to close the gender pay gap by 2030 if voted into power following the upcoming 12 December election. The difference between men's and women's average pay would take another 60 years to close under a Conservative government, the party said.

The Fawcett Society confirmed that it would take until almost 2080 for the gender pay gap to close at the current rate.

As well as the new 2030 gender pay gap target, Labour also restated some other commitments it will make in its manifesto.

These include establishing a Workers Protection Agency with powers to fine organisations that fail to report gender pay. The new agency would also check firms with more than 250 employees were meeting gender equality criteria on recruitment, career progression, pay and work/life balance.

The party also pledged to lower the gender pay gap reporting threshold to workplaces with more than 50 employees by the 2020 reporting year.

Other manifesto commitments will include introducing a "real living wage" of £10 an hour, rolling out sectoral collective bargaining, and extending maternity pay to 12 months with free childcare for all two to four-year-olds.

Laura Pidcock, Labour's shadow employment rights secretary, said: “For far too long the interests of working women have been at the bottom of the list of priorities for government. Labour in government will be uncompromising in tackling the structural barriers that are holding so many women back.

"Employers will no longer be able to treat the issue of the gender pay gap as an afterthought. Instead, they will be expected to take proactive steps to close it. Labour will deliver the real change that women need in the workplace.”

But Dominie Moss, founder of The Return Hub, said the plans were unachievable. “While it’s good to see some robust policy ideas such as fines and auditing for non-compliant firms, this timeline is completely unrealistic," she said.

"It doesn’t address the cultural and structural problems that undermine female progression in the workplace. Women have to climb so many unseen hurdles throughout their career, that men simply don’t come across."

She added: “A realistic, long-term solution needs to review how women are recruited, promoted and retained at mid and senior career points. The system needs a serious shake-up, quickly, to get anywhere near this target by 2030.”

The Fawcett Society research was based on surveys with 1,002 female workers who had male colleagues doing the same or very similar jobs; 2,003 adults over the age of 18 were also surveyed.

All pay rates should be set for the job and not the person. Most organisations that recognise trade unions have pay scales for job roles rather individually negotiated pay - so that may be the solution.

The article seeks to address aspects of the related but separate issues of equal pay (the requirement that men and women are treated equally in the terms and conditions of their employment for like work or work that is rated as equivalent) and the gender pay gap (a measure of the difference between the average earnings of men and the average earnings of women). The causes of the 2 sets of issues are different, as are the pathways to resolution. I would like to see employers and politicians do more to help employees understand the differences.