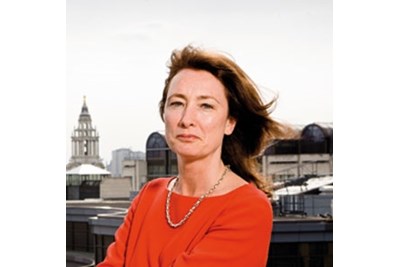 The statue of Lady Justice on top of the Central Criminal Court – the Old Bailey – in London has become a striking symbol of equality, as she stands proudly emblazoned in gold, holding a set of scales to show the world the law of the UK is balanced and fair.

As London has grown and evolved around her, the values she stands for have, to all intents, remained at the heart of the UK's legal system. In some depictions, the statue has its eyes blindfolded to show the law is blind to prejudice. This one has her eyes wide open, but she has her back to the City of London.

It is ironic, as bank workers mill around, only metres away from Lady Justice, that those of us not blindfolded often view the City as a far cry from the fair and equal ideals she embodies.

Headlines about glass ceilings for female workers and 'sexism in the City', as well as images of male 'fat-cat' City bankers, hungry for power and bonuses, have been pushed to the forefront of our minds by the media machine. And, in all honesty, if you ask yourself to conjure up your own picture of a banking boss, it is unlikely this image will be of someone from an ethnic minority, an openly gay person, someone with a disability, or even a woman, is it?

But at Lloyds Banking Group (LBG), the firm's very own Lady Justice - in the form of its director of diversity and inclusion, Fiona Cannon - has her gaze firmly fixed on the goal of inclusion in her sector.

"When we talk about diversity, we are talking about our colleagues, not separate minority groups from us. We have more female members of staff than men," she says. "Diversity is about 'you'. 'You' are an individual as much as anyone else - but there are still inequalities out there."

Cannon's achievements in pushing forward a diversity agenda speak for themselves. In addition to her day job, Cannon is a non-executive director of the Government Equalities Office board, which coordinates government policy on gender issues. She is a founder member of Employers for Fathers, which aims to encourage fathers' needs in policy development, and she was a founder member of Business in the Community's Race for Opportunity Campaign, which has set out to recognise the potential of ethnic minority communities as employees.

Before Lloyds TSB merged with Halifax Bank of Scotland (HBOS), Cannon was director of inclusion and diversity at the former, having secured the company first place in every external benchmarking tool measuring diversity it entered. This year, she was awarded an OBE in the New Year's Honours List, for services to equal opportunities.

But, following the merger between Lloyds TSB and HBOS in 2009, Cannon and her team of seven had to set about building a strategy from scratch for the newly formed Lloyds Banking Group.

She explains: "In the first year since the merger, we had some basics we had to revisit. Although we still operate HBOS as a separate brand in terms of customers, all of our staff are now on the same terms and conditions. Then we launched our diversity and inclusion strategy in 2010 to raise awareness of what we were doing and make sure it was definitely on people's agendas."

The strategy involved making members of the company's senior management team sponsors for different aspects of a diverse workforce. For example, IT director Mark Fisher is the sponsor for the work being done around disability in the workplace and is responsible for reporting this to the board.

"We had to be clear diversity would support our business objectives," says Cannon. "This comes from the various social demographics that make up our customers - and the diverse pool from which we recruit our staff."

In other words, LBG has twigged to the amount of money that comes into the bank from diverse customer bases - and for them to wish to bank with Lloyds, customers need to engage with staff they can empathise with.

"Half our customers are women," Cannon explains. "Three million of our customers have a disability. The disabled market is worth £80 billion a year to the economy and this is set to grow with an ageing population."

The same is true for ethnic minority customers - worth a potential estimated £103 billion annually to the country, according to Cannon - as well as the lesbian, gay, bisexual and transgender (LGBT) market, thought to be worth £70 billion.

With regards to recruiting the right staff to reflect these demographics, Cannon explains: "Women and ethnic minority candidates are more likely to have higher education - and although we don't have a diversity quota, we have set ourselves targets." LBG has an ethnic minority staff equating to approximately 9% of its workforce - and this is reflective of the UK population. This percentage drops to 6% at senior management. With regards to gender equality, 44% of managers in the business are female and this again drops to 27% at senior level.

It is harder to measure the number of LGBT staff in the company as their presence is not immediately obvious, but LBG has attempted to do this using confidential surveys and estimates about 2.5% of its employees are LGBT, compared to approximately 7% of the population of the UK.

"For lesbians, it is a double whammy - they are gay and female," says Cannon. "Research suggests people are more accepting of gay men, and we have some work to do here.

"Our goal is for all our staff to be confident at work. We want to increase employee engagement and customer satisfaction. We have to be reflective of the communities we serve and we are measuring this closely. Demographics are changing and society is changing too. Men are caring for children nowadays, baby-boomers are working past retirement and there are older staff in the workplace. People want to work for an organisation that is flexible. Employers have to react and be aware there are these different and diverse people in their businesses."

But, in response to damning headlines about diversity and equality in the financial sector - in 2008, for instance, the TUC released evidence that women working in the financial sector had been 'forced' to wear high heels to the office - Cannon is quick to point out the amount of hard work that has already gone on across the banking sector to promote equality.

"There will always be these headlines - and that is why we need diversity and inclusion professionals. But there has been massive change over the past 20 years.

"The banks had lobbied government for better childcare benefits - that has happened. There are more women in the workplace, as 20 years ago, flexible working was unheard of. We realise in the City we need women - but we are talking about women at board level now, when 20 years ago, the debate was about women at work."

She adds: "We want to recruit the best people to come and make us money. That's why the City has been such a big part of promoting diversity. We are really forward-looking and the newspaper headlines have given a distorted view of the true picture. At LBG, we want to be thought leaders. We were the first bank to offer an open-to-all flexible working strategy [at Lloyds TSB] and we have pushed to share that way of thinking with other employers."

But society around the workplace is changing with increasing velocity. Generation Y is much more positive about working in a diverse and varied workplace, although Cannon explains LBG has launched a reverse mentoring scheme, for employees of different generations to work together and learn from each other, in a bid to tackle any ageism questions.

Across the wider economy, change is happening - albeit slowly. In December 2010, the Office of National Statistics reported the gender pay gap had decreased to 10.2%, down 2% from the previous year. And the proportion of women on the boards of the top UK companies has increased to 13.6% in 2010 from 11.5% in 2008, according to the European Professional Women's Network.

Undaunted, Cannon is optimistic about what the next 20 years hold for diversity and her role - although she freely admits it is one that should be made redundant in the future.

"I do this because I am interested in change," she says. "There is a sense of unfairness in some workplaces that is based on generalisations - and this stops people from being able to live their lives the way they want to. People should be able to be themselves at work. The campaigner in me wants to change this.

"Some 20 years ago, people would have thought a bus that could accommodate disabled people was a work of science fiction. This was the time when people were shouting down the phone at me, asking what diversity means to them. But now we know it is not just a 'nice thing to do', but it can fundamentally help businesses do business. Who knows what developments the next 20 years will hold? I am feeling excited about the future."

Opportunity Now, the workplace gender equality campaign within Business in the Community, launched its most recent benchmarking report into diversity in May 2011, with promising results: nearly all employers (96%) have a board-level leader who champions the importance of equality and diversity.

The Opportunity Now Benchmarking Trends Analysis 2010-2011 report was based on in-depth analyses of workplace practices in 76 of the UK's biggest organisations. It found 91% regularly review the gender breakdown of their workforce at their main board meeting.

The report revealed 84% of employers are still putting the financial resources in place to help create more diverse workplaces, with those who declared their budgets spending over £14 million collectively on diversity programmes.

Six out of 10 organisations utilise unconscious bias training to address issues of stereotyping and bias, according to the report.

Opportunity Now believes its benchmarking survey is the most extensive survey of gender equality, diversity and inclusion in the UK workplace. This year, 76 organisations participated in the benchmarking exercise, 50 from the private sector and 26 from the public sector. These organisations employ over 1.3 million people, which is equal to 4.3% of the UK workforce.