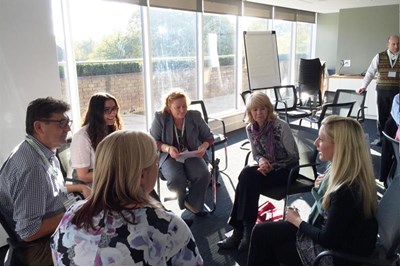 Surrey County Council is a typical local authority in being responsible for a range of services, including highway management, waste disposal and education. It’s also typical in the waves of cuts made to its budget over the last five years. Though Surrey is an area many associate with “leafy and wealthy”, says senior equality, inclusion and wellbeing manager Abid Dar, there are considerable pockets of deprivation the council must also provide for.

Local councils often come with a reputation for being somewhat adversarial in terms of the number of formal complaints lodged. And so it was at Surrey County Council this time two years ago. The culture was adversarial even for a council, reports Rakhi Saigal, strategic HR and OD business partner. “If someone was unhappy or there was a situation, a formal process was one of the first things they jumped to,” she says.

This also meant that many grievances and irritations were going unreported, adds Dar. “We had a staff survey four years ago where the majority of staff said they wouldn’t report a situation, and also staff who did report it said they weren’t satisfied with the outcome,” he says, adding: “We found 80% of people who’d encountered a situation wouldn’t report it because they said it was too low level. It was stuff that was disrespectful but not big enough to go formal.”

The HR team realised that they needed a much more preventative approach – one that would also be low-key and informal enough to empower staff to speak up. Inspiration came from the council’s youth justice department’s Restorative Justice system. “That was working with youth services so that if a young person committed an offence, rather than putting them through a punitive process and them having a criminal record, the youth services would facilitate a meeting with the victim and young person,” says Saigal. “They’ve had a 60% reduction in the number of cases going through the courts.”

Of course the HR version isn’t about justice, rather having “a more grown-up conversation at the start of the situation, rather than waiting until it becomes a messy long case resulting in tribunal”, in the words of Saigal.

Surrey worked with organisational development consultancy Mayvin to launch the scheme. “The first thing we do is have a restorative conversation,” explains Saigal of how Restorative HR (RHR) works. “We keep this as flexible as possible. We don’t have a policy on what restorative means. It could be they have a facilitated conversation with someone from HR. It can be completely confidential or they can agree to it being shared afterwards.”

RHR’s USP is very much this informality, says Saigal: “Mediation is used in a lot of organisations, but this is unique in terms of there being no process around how restorative conversations should work”.

However, making sure this expectation is effectively communicated, understood and applied still requires people to be trained in how to hold the right kind of good quality conversations. Building confidence among the HR team has been even more important than formal training, reports director of Mayvin James Traeger.

“The issue when we came to Surrey was confidence,” he says. “To say to very competent HR practitioners: ‘you’re going to put aside the policy handbook and work with the relationship’ is a big ask.

“One of the questions from the practitioners was ‘will the organisation have my back? What happens if it goes wrong?’ So we brokered conversations between the HRD where those conversations could be had in an atmosphere of openness [and people’s fears could be allayed].”

It’s important others around the organisation are trained too (though only HR practitioners have so far been formally accredited). “We’re moving towards more self-service… we have 40 facilitators from all around the organisation who are not from HR; we have 70 fairness champions who are potentially a first point of contact and work with people on a one-to-one basis,” reports Dar. “We’ve got this network in about 70 locations around Surrey: managers, directors, practitioners, people on the ground, social care workers, who all now have these skills to do the facilitation on our behalf.

“It’s fluid,” he adds. “HR doesn’t have to lead. HR’s role will start to be more where they’re involved in a more complex situation.” The aim is that mediation starts “before we [HR] even know [there’s an issue],” says Saigal, reiterating that a formal route is still always used where there’s a safeguarding or gross misconduct issue, for example.

On average 15% of casework is now resolved through RHR. “Bearing in mind that a lot of last year we were getting staff trained up around this [that’s very good],” caveats Saigal.

“We’ve even used this approach for restructures and collective disputes, absence – everything that comes through as work for HR we’re using this approach,” she adds. “Now that we’re training managers to work in this way some are saying ‘we used this for x situation’ where we [HR] would never even have thought about using it.”

Time and money saved on tribunal fees can now be reinvested in other HR activities, says Dar: “That’s allowed the HR team to reinvest their time into more meaningful activity like supporting more OD interventions, and wellbeing conversations,” he says, adding that there’s also been a saving in relation to the “unplanned consequences [of formal disputes], which are often unexpected absence and suspension, both of which have gone down dramatically.”

The fact that such tribunal-related absences and suspensions have reduced, points to the ultimate measure of success of RHR: happier employees post-conflict resolution and a happier organisation overall. “When we facilitate this kind of conversation the manager may not be aware this [grievance] is going on,” says Saigal. “There’ll be issues in someone’s personal life they’ve not shared with the manager. Because this is an informal confidential setting they’ll be more willing to share what’s going on.”

She adds: “One of the key things about this framework is it enables very honest conversations. We’ve had those where the employee says ‘I just want to leave, I haven’t wanted to be here for the past number of years’. Then we can talk about that rather than going through the formal process.”

But better RHR outcomes can only be achieved through a patient approach. “What we’ve found in some of our cases is if it’s very complicated it could take longer to resolve this way than going through a formal process,” says Saigal. “It’s normally not just one conversation.”

“The underlying word is patience,” agrees Dar. “Because there is the temptation with HR practitioners to set up the first meeting, the investigator will come within two weeks, it’ll all be done in four, and in a way you’re almost getting rid of the problem by discharging those policy duties.”

Saigal adds that the team has to be mindful that the approach won’t work in all scenarios. “It doesn’t work for every single situation and we’re not saying it has a 100% success rate,” she says. “Both parties need to be open to resolving the issue, not just doing it as a tick box.”

But with Surrey County Council’s culture changing slowly but surely to one of honest conversation rather than adversarial disputes – no mean feat for a local council – RHR’s success rate is certainly one to be admired.