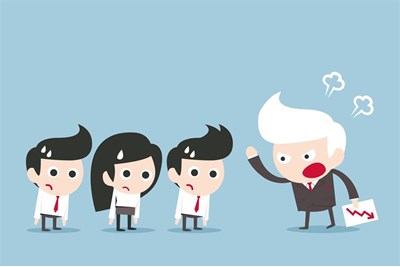 As fresh allegations emerge of bullying and toxic work cultures in high-profile organisations, research has found that bad bosses are largely to blame

Bad management is a key driving force behind toxic workplace cultures, according to research by Equality Group.


Its survey of 2,000 UK employees found that a third (33%) dislike their job because of a bad boss, while 60% believe bad bosses are the main reason for businesses failing.

Equality Group said toxic cultures are having a corrosive effect on employee wellbeing. Half (50%) of the workers surveyed said that a boss had caused them significant anxiety or stress, and 25% stated that their Sunday-night anxiety is solely down to this. Meanwhile, 60% reported that a good manager meant they'd stay in a role.

Researchers also noted a significant split over perceptions of how BAME employees are treated. Forty-three per cent of BAME employees agreed with the statement 'I believe my employer does not nurture BAME talent' compared to 9% of white employees.

Several high-profile cases of poor working cultures have come to light over the past few weeks. On 30 May the Financial Times revealed that two prominent female partners from KPMG quit in February because of the firm's response to a senior male partner's bullying behaviour.

This followed Amnesty International revealing it had ordered an independent review after two employee suicides last year. The report found that the organisation had a toxic culture. Amnesty said the senior leadership team accepted responsibility and all seven members had offered to resign. Five of the seven leaders are now believed to have left or are in the process of leaving.

Equality Group said that employees stay loyal to companies with positive policies, good mentoring and strong workplace cultures. An organisation without these elements is likely to have higher staff turnover as staff typically leave when they don’t feel supported, it added.

Commenting on the findings, founder and CEO of Equality Group Hephzi Pemberton said: "Workplace inclusivity is fundamentally about culture – it’s about how comfortable employees feel within their workplace, and how able each individual feels [to be] their authentic selves within a professional setting."

She added that organisations can no longer afford to ignore workplace culture: “Employee retention should always be at the forefront of companies' minds as even the best business cannot flourish without loyal employees. The bottom line is that companies with an inclusive culture have a lower turnover of staff and are subsequently more attractive to prospective candidates.

“We live in a hugely interconnected society where potential candidates can go online and assess the culture of a company before applying for a role, and because of this businesses can no longer sweep a toxic culture under the rug.”