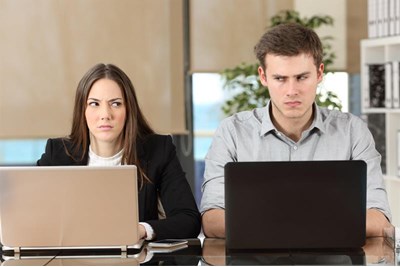 As political divisions in the UK and US increase, talking politics at work is no longer as taboo as it once was

UK workers feel that the workplace is becoming increasingly politicised, according to research from Jobsite.

Just under half (46%) say they‘ve noticed a marked increase in political discussions among colleagues since the EU referendum.

The research was part of a wider report examining the attitudes of US and UK workers to discussing politics at work.

It found that 38% consider it taboo to discuss politics in a professional environment and 51% admit to holding back when sharing their political views with colleagues.

Almost three in 10 (27%) Americans believe talking about politics at work should be banned. While fewer UK workers feel an outright ban is necessary (17%), two in five (43%) admitted to holding back on expressing their opinions on certain issues in the workplace.

Those on the political right were the most likely to feel ideologically isolated. One in four (25%) Brexit Party supporters and one in five (19%) Conservatives do not think their political views are shared by the majority of their colleagues. Conservatives were found to feel less comfortable discussing LGBT+ rights, gender equality and diversity than Labour voters (24% compared to 18%).

Only 15% of UK workers feel a strong desire to work for an employer whose political outlook matches their own, the survey found. However, younger people were found to be significantly more concerned with their employers’ politics. Fifty per cent of workers aged 25 to 34 said prospective employers’ convictions should be closely aligned with their own.

In the current political climate increased discussion of politics should be expected, said Alexandra Sydney, group marketing director at StepStone. ‘‘We’ve all heard 'don’t talk religion or politics in the office’, but given the current pace of global politics this is often easier said than done," she said. "Employees have a right to free speech and their own opinions about political and social events.”

But employers have a responsibility to ward against language that could be deemed offensive or discriminatory, she added: “The exception is where hateful language takes the place of everyday debate. Ultimately it’s in employers’ interests to cultivate a workforce of diverse backgrounds and viewpoints, but also an environment where all employees feel they can express themselves.

“With that comes a responsibility to prevent debates in the workplace from getting out of hand. It’s not unreasonable for a manager to intervene and de-escalate conversations that see colleagues distracted from work or that have the potential to affect operations. By maintaining an open-minded and accessible work environment companies can ensure they’re well adapted and better equipped to attract candidates from the widest possible pool of talent.”