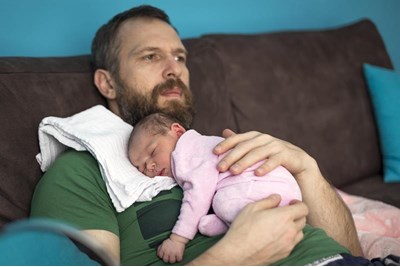 @Carol - "Don't want the men under their feet"?! What an outdated attitude. Most research I've seen shows lots of men would have loved to take time off to care for their little baby, but financial or ...

Fewer than one in 1,000 employees have taken advantage of Shared Parental Leave (SPL), according to research from Milners Solicitors.

The research found that out of more than 56,000 people employed by some of the UK’s biggest private and public sector organisations, just 54 of them had taken up the option since it was launched in April 2015.

Bad practice uncovered by the research included several instances where there was no specific policy about SPL, or the change had simply been uploaded to a staff intranet that was not easily accessible to all employees.

Managing partner at Milners, employment law expert Simon Bass confirmed that a lack of awareness could be behind the low take-up.

“[SPL] was trumpeted as a family-friendly policy, designed to help working dads improve their work/life balance, spend more time in a ‘hands-on’ role raising their family, and lift the load from their partners,” he said. "It also offered mums the chance to return to their jobs earlier if they wanted.

“But our analysis would suggest that there is either little appetite for it, little knowledge about it, or both.”

However, the research also found examples of best practice where changes had been weaved into HR policies and shared proactively with staff – for example by gaining signatures to ensure employees had received and understood the new legislation.

SPL was introduced by the government to replace Additional Paternity Leave, and entitles both parents to share 52 weeks' leave and 39 weeks' pay (minus any maternity/paternity leave already taken), subject to certain eligibility criteria, with their partner on the birth or adoption of their child.

The Milners research findings align with research conducted by Working Families, which found that almost half (48%) of fathers would choose not to use the scheme.

Bass agreed that this could be a contributing factor. “There is some anecdotal evidence that some working dads fear discrimination, and that their career prospects may suffer, if they pursue SPL,” he said. “Others who are the main breadwinner in the family say it is not an affordable option.

“Both these reasons [this and lack of awareness] will give employers and the government important food for thought if the initiative is to be rebooted and not simply left to wither on the vine."

This is the 'benefit' no one wants as evidenced by lack of take up. A straw poll of most men in any industry will reveal many don't really want to take the two weeks off at the start, nor to stay at home attempting to look after a newborn baby. A straw poll of most women in any industry will reveal they don't want the men under their feet while they attempt to bond with the new baby and very few would wish to leave their small child with their partner. Even paying full salary would not be an encouragement in many families. It's a fact of life there is a real difference between men and women no matter how much pressure is heaped upon them to attempt to change this.

@Carol - "Don't want the men under their feet"?! What an outdated attitude. Most research I've seen shows lots of men would have loved to take time off to care for their little baby, but financial or societal constraints stopped them from being able to. What's wrong with giving parents a choice?

While I support the principle of shared parenting, I feel that once again the burden of administering this complex scheme has fallen on the employer. As a standalone HR manager in an SME I am struggling with the details of applying it fairly. It appears that for the first time, we in HR are concerning ourselves with the family's individual circumstances in a way we've never had to do before. Previously the benefit was for our employee, which was easy to assess - now we have to be assured that their partner is eligible, is working, earns enough etc.

@Carol - I totally agree. This is a benefit that nobody wants, and like the Brexit result, an example of where the metrosexual chattering classes of are out of touch with what the real world thinks. Furthermore, it is a half-baked piece of legislation, the implementation of which presents real challenges to employers. I know many men who have become fathers since the law changed, and while it may be unfashionable to say it, they define themselves by what they do for a living and see the best thing they can do to provide for their new-born is to apply themselves to their work. That is the uncomfortable reality that Nick Clegg and others failed to appreciate when they promoted this purely aspirational and unnecessary piece of legislation.

I had to read this article a couple of times. The statistic about less than one in 10,000 is spectacular, but out of the 58,000 employed, let's assume half are women, leaving 29,000, and for whatever reason, one in 50 might have given birth during the relatively short period, that amounts to 580 that could qualify. Finally let's assume that in a third of cases it may not be beneficial for the partner to take it up. That leaves 54 out of 380. That's about 15%. I know my figures are estimates but they present a more accurate picture than one in 10,000.