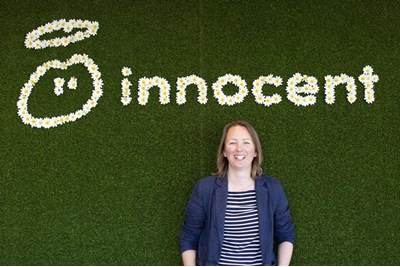 Innocent Drinks’ group people and culture director, Sarah-Jane Norman tells HR magazine how the company has stayed true to its roots while expanding

It’s that time of year again. When, after gorging on too many mince pies and Baileys and forgoing exercise for the comfort of festive pyjamas and Christmas TV specials, the ‘new year, new me’ mentality kicks in. Resolutions to eat healthily, get fit and look after the self are proclaimed all around the world (only for many to fall by the wayside before January is out).

But such lofty ambitions aren’t just for Christmas at Fruit Towers, the HQ of Innocent Drinks. The smoothie and juice brand, which started life in 1999 when three university friends sold smoothies at a music festival, prides itself on its purpose ‘to make natural delicious food and drink that helps people live well and die old’.

And if popularity is anything to go by it seems to be living up to it, with Innocent now the UK and Europe’s number one juice brand, selling products across 30 countries and counting.

“The wording of our purpose and vision has evolved a bit as we’ve grown, but it’s always been about making it easy for people to do themselves good,” says Sarah-Jane Norman, group people and culture director, as she gives HR magazine a tour of Fruit Towers.

Stopping to pick up some free smoothies (employees have an endless supply) and admiring the ‘grassy van’ outside, we take in the HQ’s now-famous indoor grass carpet and picnic benches, the original bananaphone (the direct line between customers and Innocent team members), and copious woolly hats sent in by fans as part of its annual Big Knit charity campaign.

Norman explains that this peek behind the scenes is open to anyone, with members of the public welcome to pop in for a free smoothie and tour.

Just days before HR magazine’s visit Duncan James from boy band Blue had visited to shoot a promotional campaign for Innocent’s ‘blue’ smoothie, following a Twitter debate on whether the drink was green or blue. Wherever you stand on the blue/green debacle, it’s clear that this is all part of the fun culture that runs through both the external brand and internal workplace.

“People love the brand,” she says. “This is my place of work and people come in and are all wide-eyed – it makes you super proud to work here.”

As we take a seat in the library area (Innocent buys every employee a book of their choice), Norman points out another marker of this culture and a very Innocent take on the long-server award – 3D-printed heads of her colleagues staring down at us.

“You have to be here 15 years to get one. So I basically need to leave in one year and seven months,” she jokes.

From start-up to market leader

Coming up to her 14th year at the company, Norman swapped the security of global corporate GSK for Innocent back in 2006, when it was a young start-up with just 100 employees.

“They tempted me over to small Innocent on the promise of being part of a journey to show it’s possible to be a successful company that grows and delivers profits in a purposeful way, which at a time of capitalist greed wasn’t the way many businesses typically ran,” she recalls. “I came and met Adam [Balon] and Jon [Wright] – two of the three founders – who were inspiring and sold a great vision, and I’ve been here ever since.”

It was the latter that Norman feels was the “start of [her] journey towards HR”. “I realised then that having a team of people and developing them was really energising,” she says. “I looked round and found that was the thing most people found hard, whereas it was the thing I found easy.”

Following another role in business delivery and coaching experience on the side, Norman said out loud for the first time that she’d like to do the people director role.

She credits CEO Douglas Lamont for taking a chance by giving her the role to lead HR when her predecessor left, despite her having no prior HR experience.

“If I wasn’t at Innocent I’m not sure if I’d have got the chance as it’s quite the leap on the CV. That faith in me from day one was great as he wasn’t like ‘you haven’t got that experience in HR’. He said ‘we think you’re the right HRD for the company now’.”

Now responsible for HR for the 500-plus employees across Europe and counting, Norman says that on top of classic HR she has a “culture team”, which includes the people responsible for the office environment, events and all the little touches that contribute to its unique culture.

She says: “The culture team includes our office angels who deal with the environment and events, and an office superhero who is responsible for fleet and maintenance – that’s their actual job titles.

“We’ve been talking about calling someone the chief astronaut as he’s in charge of space. As you can see, we don’t take ourselves too seriously when it comes to hierarchy.”

This lack of hierarchy is also visible in the wall of baby photos, showing every employee as a baby – even the CEO.

It is a culture that Norman is keen to protect, and something that has been one of her five key focuses since becoming group people and culture director, along with future of work, systems, reward and talent.

Maintaining Innocent’s start-up culture after it was bought by conglomerate Coca-Cola in 2013 and the founders stood down from its day-to-day running might sound like a challenge to some. But Norman asserts the company isn’t too different to when she joined.

“The organisation is very similar today to what it was back then and I think that’s because the purpose has always been there right from the start – and there’s always been that eye on helping the planet,” she says.

Innocent gives 10% of its profits to the Innocent Foundation charity, and the company was certified with the sustainability accreditation B Corporation in 2019. All employees also have sustainability commitments as part of their individual annual objectives.

Meanwhile, other efforts to maintain the all-important founding culture have included the launch of a scholarship, where employees pitch to be awarded £1,000 to fulfil a personal dream. “People do a presentation in a Monday morning meeting and everyone votes on who gets it,” she says.

“One person wanted to collect all their grandparents’ recipes and publish them in a book, someone else wanted to recreate the Michael Jackson Thriller video, which was amazing – they both won as it’s something they felt passionate about.”

The biggest change Norman has seen over the years is the move from an industrial estate unit to the current office building.

“But we still have the grass floor that was in the old office because it was cheap and durable… that’s not the reason we have it today – it’s now because it’s part of the culture.”

She adds: “The people are broadly the same too, there’s just a load more of them.”

While the workforce is “very classic FMCG”, except for an outsourced supply chain, Innocent is embarking on a major change by setting up its own factory for the first time in Holland.

“Which means we’re going from a fairly classic FMCG company without manufacturing to one with these services, so this means a whole new recruitment drive,” says Norman.

“This means hiring about 200 people and at least half of those roles are roles we’ve never hired for before. We’ve also recently expanded our geography beyond Europe into Asia so we need to focus on the capabilities we have and need to be successful in the future,” she adds.

This means talent has been high on Norman’s agenda since her move to HR, and recruiting people whose purpose aligns with Innocent’s is key.

“People often talk in interviews about the Foundation and our sustainability efforts,” says Norman.

“The first-round interview is focused on the person and their connection to our purpose – it’s only the second round where we test their skills for the role. If we bring people in whose values jar with ours they’re not going to contribute in the best way.”

It is a task she concedes is becoming more challenging in light of the prevalence of other start-ups appearing on the scene, all offering unique EVPs.

“There’s loads of companies coming along that are interesting to people, so why would you pick us? We don’t want to feel like just another company. We talk about staying little as little is all about that connection.”

And Norman is no different when it comes to being aligned with Innocent’s ethical purpose – hence her decision to become an employee trustee of the Innocent Foundation.

“This role is to help make sure we run the Foundation correctly and make good decisions on the work it does,” she says. “It’s totally separate to my HR role. Sometimes the HR world can be stressful… but then from an individual point of view I can step into the trustee role and help people in real need.”

Norman describes this setup as her having “two great jobs, not just one”. However, she concedes that recruiting people with the same purpose can pose a D&I issue, particularly given the three founders were young, white, Cambridge-educated men.

“Visible diversity is probably a bit lower than other companies partly due to there not being a lot of people who aren’t aged 20 to 30,” she says. “We’ve only just had the first person retire, which in 20 years is unusual.”

It’s all about ensuring the talent is “fit for the future”, she says. Step forward the Future of Work project, where employees from across the business are brought together to come up with ideas to improve Innocent for the future.

One such solution is an ongoing D&I project, which includes unconscious bias training for all managers, as well as the recently revamped parental leave policy where any employee of any gender who is having a baby or adopting can take 52 weeks off work with 16 weeks’ full pay.

There has also been the rollout of the Your Future talent development programme to retain and develop the talent the company already has.

“Our attrition of junior talent was higher than we wanted so this helps build their careers,” says Norman. “There’s been a huge focus on the quality of conversations managers have with their teams and providing them with the tools to do this well.”

The Future of Work project has also led to the implementation of succession planning for every single role in the business and the introduction of Spring Roles, where employees can take on a short-term role outside their team to gain experience in another part of the business.

This also means a renewed focus on the physical work environment. “The building is quite desk-orientated and people have said they want more private space so we’re now looking at the building and how we can evolve the work environment to give people the freedom to work in a way that works for them.”

Norman has plenty to be keeping her busy for now. But she feels she has found her functional home in HR: “I think it found me – if anything I should have spotted it and made the move sooner.

“But I might have to leave Innocent soon and come back again so I don’t get a 3D-printed head made of me.”