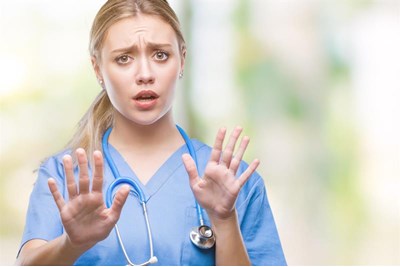 Throughout 2019 14.9% of NHS workers experienced physical violence from service users in their care or other members of the public.

More than a quarter (28.5%) had been bullied or harassed by patients/relatives/the public.

Seven per cent of respondents also disclosed they had been subjected to some form of discrimination in the past 12 months.

Bullying and harassment were experienced most by ambulance staff and those working in mental health or learning disability care (47.4% and 32.7% respectively). This trend was also repeated for incidences of physical violence – 34% of ambulance workers and 20.2% of mental health/disability workers had experienced this, compared to the national average of 14.9%

In response to the level of harassment and abuse exposed by the survey, NHS England has announced plans enabling hospitals to bar offending patients from non-emergency care. This extends the power individual organisations already had to refuse treatment to people acting aggressively or being violent.

The NHS, the police and the Crown Prosecution Service have also created an agreement that will see a crackdown on people who, according to health secretary Matt Hancock, “act violently and with criminal intent towards NHS staff”.

In an open letter to the NHS workforce Hancock further stated: “We will not tolerate assaults, physical or verbal, against NHS colleagues – staff or volunteers. You should not tolerate violence or abuse either. Being assaulted or abused is not part of your job.”

Discrimination against NHS workers from patients, their relatives and the public is on the rise compared to prior years of the survey.

In 2015 5.8% of NHS workers disclosed they had been subjected to some form of discrimination at work. For 2019 the number experiencing discrimination had risen to 7.2% of 569,440 respondents, a percentage representative of around 40,999 people.

Speaking to HR magazine, Sandra Kerr, race equality director at Business in the Community, said the findings correlate with the organisation’s Race at Work analysis.

She said: “More action is needed from employers to support employees to not be bystanders and support them to take action if they observe their work colleagues are being discriminated against, abused or harassed.

“Having to work under these conditions will undoubtedly result in a negative impact on employee mental health and wellbeing.”

Staff seemed to feel confident reporting incidents of violence, with 72% saying the last time they experienced violence at work they or a colleague reported it. However, 22.4% said they did not report it.

The NHS is currently developing an NHS People Plan which aims to enhance staff experience, make the organisation a better place to work and address workforce supply across the service.

The 2019 NHS Staff Survey is the 17th annual national survey of NHS staff. More than one million staff across 300 NHS organisations were asked to take part. It received a response rate of 48.5%. All full-time and part-time staff directly employed by the NHS on 1 September 2019 were eligible to respond.