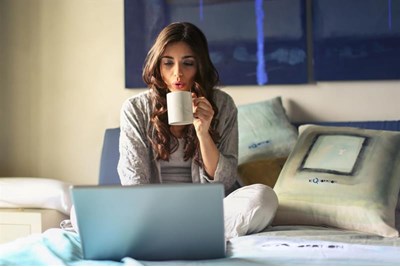 Two-thirds (66%) of UK workers believe they are effective when working remotely, according to the latest LinkedIn Workforce Confidence Index

Over half (55%) said their industry as a whole can operate effectively based on remote work.

The LinkedIn study, which is run fortnightly, also showed that UK confidence about jobs, finances and careers sits at +13 on a scale of -100 to +100. This is more positive than negative, but only slightly.

From the data across April, it emerged that those working in the healthcare sector felt the most confident, at +24. They were particularly optimistic about their job security.

On the other hand, education professionals were among the least confident, sitting at a score of +10. They felt particularly low levels of confidence around progressing their career in the next year.

In terms of job-seeking, survey respondents felt generally pessimistic. When asked about their confidence in their ability to get or hold onto a job, the average score was -7 on the index for the week from 27 April to 3 May, down from -2 between 13 and 19 April.

Those working in sales were the most pessimistic, with 77% expecting the number of available jobs to fall in the next two weeks.

Martyn Dicker, director of people at Unicef UK, told HR magazine that it was unsurprising to see that two-thirds of UK workers believe that they are effective when working remotely.

In addition to technology's ability to facilitate remote work, Dicker said: “I also believe that a key ingredient of workers feeling that they are effective, is their strong desire for it to work.

“We know that greater flexible working is desired by many, with the CIPD 2019 Job Quality Index stating that 68% of UK employees would like more flexibility. It’s worth noting that this is just 2% more than the 66% believing that they are effective in the LinkedIn study.

“The UK fares particularly poorly when it comes to job demands interfering with family life, so maybe this forced home working experiment will provide UK employers the impetus to drive change and embrace more flexible working.”

The study found that only 22% of those at director level or above thought their company would be better off in the next six months, with 45% saying they thought it would be worse off.

Among those in non-management roles, 18% believed their firms would be better off and 37% thought they would be worse off.

Emma Jayne, area director of people and culture at the Dorchester Collection, said: “The future is so uncertain right now and it is at the forefront of people’s minds constantly I’m sure.

“As employers it’s important that we are offering regular, clear and honest communication on the situation our businesses are in and if we can offer reassurance then that should be the very first thing that we are doing.

“It’s a rollercoaster ride of emotions at the moment and HR’s most critical role right now is to take care of the mental wellbeing of their people.

“The results around the outlook for the next six months I think are very realistic. Despite the government encouraging a return to work to boost the economy, the reality is the economy is going to take a long time to recover from COVID-19.”

Finally, the index found that 49% of UK workers plan to increase the time they’re spending on online learning in the next two weeks, corroborating other recent studies on the upskilling trend.

Nearly half (48%) said they hoped this learning would advance their career path, while 47% wanted to learn something unrelated to work.

A third (32%) were interested in improving their emotional wellbeing through online learning, while 30% wanted to contribute to society and help others.

Jayne added: “Online learning is such a gift at the moment. We are all in our homes with some time on our hands which is very different from the fast pace of life that used to be’ normal’.

“I am certain we will see an upswing in a more joined up and kinder society when we come out of this pandemic, I wonder if people will be inspired by the amazing work of the NHS and other services and they will see an upturn in people wanting to pursue a career in those fields.”

The LinkedIn Workforce Confidence Index surveys around 1,000 UK LinkedIn members in each wave.

If you had more time…