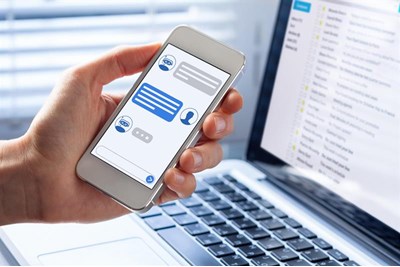 More than half (53%) of frontline workers use messaging apps such as WhatsApp up to six times a day for workplace communication, according to research from Speakap.

But almost one in five (16%) workers said their HR departments are unaware of this.

Additionally, 38% admitted to using social media sites between one and six times each day for work-related matters. Once again, 20% of respondents said their HR/internal communications departments aren’t aware of this.

Speakap warned of serious implications for data security and regulatory compliance. With the GDPR now in effect many businesses are now banning the use of messaging apps like WhatsApp and Snapchat to comply with the regulations. For example, Deustche Bank banned the use of SMS, WhatsApp and other messenger services as of January 2017 because of the stringent documentation obligations required of banks for regulatory compliance.

Volkswagen restricts its employees from using chat apps for business at all and BMW only permits authorised apps on company phones (of which, WhatsApp did not make the approved list).

Patrick van der Mijl, co-founder of Speakap, said: “The fact that this disparity exists is just the tip of the iceberg. Just because these tools are popular or preferred doesn’t mean they are the right choice. There are two serious problems with using tools like WhatsApp and Facebook Messenger for employee communications – digital wellbeing and data security.”

He told HR magazine that use of the technology also made organisations vulnerable to cyber attacks.

"The risks with using unapproved messaging apps go beyond data privacy and can involve relevance and accuracy of communications. For example, in August 2018 cybersecurity firm Check Point Software Technologies said it had discovered a flaw in WhatsApp that allows scammers to alter the content or change the identity of the sender of a previously-delivered message," he said.

"More specifically, scammers can change a quote – a feature that allows people within a chat to display a past message and reply to it – to give the impression that someone sent a message they didn’t actually send. To make matters worse, WhatsApp admitted that it was possible to manipulate the quote feature.

"This could be further exacerbated by the high volume of users who can be included in group chats (up to 256 people). So it can be tough to keep track of all of the messages and ensure the messages haven’t been manipulated with misinformation.”

The Speakap research also asked workers their opinions on how their company communicates with them.

More than a quarter (27%) said their biggest frustration with how their company delivers two-way communications is the lack of collaboration and sharing of relevant company/product information and learnings with their fellow colleagues, teams, office staff and management. When asked to clarify the most important aspect of how their company connects with them, 24% said finding a good balance between their personal and work lives is most important.

Der Mijl added that constant communication via messaging apps is making it difficult for employees to achieve a healthy work/life balance: “This is reinforced by the data from our study, with 30% of the respondents saying that the 24/7 nature of messaging apps and social media sites makes it difficult to maintain a work/personal life balance, and 12% expressing concerns that sensitive data could be left exposed and susceptible to data breaches.”

Der Mijl recommended employers follow the example of other organisations and ban the use of messaging apps: "I would strongly advise businesses in the UK – and elsewhere in the world – to follow the lead of Deutsche Bank and several other businesses in the banking and automotive industries who are banning the use of messaging apps in the workplace.”