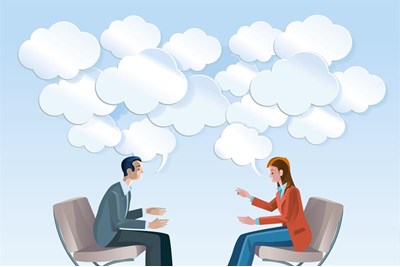 
"The challenge that faces modern organisations is that political developments have led to a shift in the Overton Window (the range of ideas that are considered acceptable for discourse) to encompass more emotive and provocative topics. These are often divisive and organisations tend to (understandably) seek cohesion rather than polarisation.

"It’s probably unfair, unrealistic and counterproductive to ban certain conversations altogether. Arguably MeToo and TimesUp are sensitive areas, but they show that people having a voice on uncomfortable subjects can lead to positive change.

"However, it is reasonable to ask people to be understanding, empathetic and avoid causing offence – and to require adults to be adults and respect boundaries.

"Work isn’t a debate club and it has always been reasonable for employers to expect some boundaries to discussion; it just seems we have entered a new era of provocative conversations."


"In the current febrile political environment people are increasingly becoming engaged, even consumed, by the Brexit debate.

"From a legal perspective this is quite a complicated area. The Equality Act 2010 does not expressly prohibit discrimination on the basis of political belief – only on strictly religious or philosophical belief.

"In 2007 an employment tribunal had to consider a case involving a claimant’s belief in republicanism. It decided that such a belief was ‘philosophical’. Conceptually the employee was entitled to protection from discrimination on that basis (although she did not succeed in her claim in the end).

"Given that Brexit is on everyone’s minds employers should be careful. Disparaging remarks about those who hold one opinion may make those of that persuasion feel uneasy. If the employees affected suffer detriment or are ultimately dismissed this could be an issue that winds up in an employment tribunal."