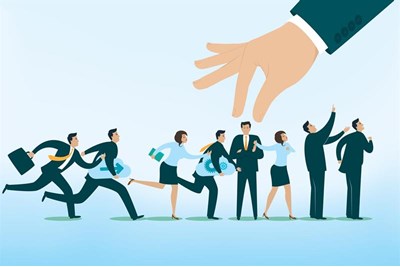 Twenty unemployed people are chasing every vacancy in disadvantaged areas of the UK, up from around four people per vacancy before the coronavirus hit.

Analysis by the Institute for Employment Studies (IES) found the number of applications per vacancy increased to over 50 unemployed people in eleven areas of England.

This contrasts with more affluent areas such as Kensington and Chelsea, Chichester and Lincoln where there are on average three unemployed people chasing every job.

Yet there were more positive signs that the job market is beginning to recover, with newly notified vacancies in the second week of June reaching 106,000, according to the IES, nearly doubling the 58,000 in the last week of May.

However, this equals just one third of the number of new vacancies notified in the same week last year, which reached 321,000.

Dave Innes, head of economics at JRF said areas of the country where people were already held back are falling even further behind.

He said: “This research shows parts of the economy where workers are at the highest risk of poverty, such as restaurants and non-food retail, are being hardest hit by the outbreak.

“People who were already struggling to get by may find their hours are cut, or their jobs lost altogether at a time when vacancies are down significantly. As the furlough scheme winds down, unemployment is only likely to increase.”

Over a third of all vacancies are in health, education and social work compared with one in five pre-crisis. Adverts for these job types are down by just a quarter compared with before the crisis began.

Recruitment in sectors more affected by the shutdown remains poor, with vacancies in sales and hospitality at 21% and 13% of pre-crisis levels.

David Frost, organisational development director at Total Produce, told HR magazine that the sector could help reduce the unemployment inequality by being open-minded in terms of how vacancies are filled, such as job shares and apprenticeships, and advertising in the local community to attract people who may not otherwise see the job opportunity.

He said: “HR should be prepared to employ trainees and incentivise current employees to ‘find a friend’ to fill current vacancies as an effective way of recruiting from within the local community.

“They should also work with outplacement consultants who may be helping with restructuring projects in other businesses where redundancies are taking place. Short-term and fixed-term contracts may help people get back into work, plus encouraging a community-minded spirit within the business to support the community where the business is based.”

Government has long promised to ‘level up’ the economy to improve inequality, yet Public Health England chief executive Duncan Selbie warned last week that this would need to happen at “supersonic speed” to prevent the most vulnerable from losing their jobs.

Speaking to HR magazine, Liz Sebag-Montefiore, co-founder and director of 10eighty, predicted the figures will only get worse.

She said: “Unemployed all around the country may struggle to find new roles. Towns reliant on tourism or with jobs concentrated in low-paid areas of the service sector are suffering; retail and construction are also hurting.

“Confidence is low and employers, already struggling with cashflow, will be slow to recruit. If we are heading for a recession this will get worse before it gets better, and will start to bite as government support for businesses is withdrawn".

Data was collected by Adzuna, funded by the Joseph Rowntree Foundation and matched with local claimant unemployment data published by the Office for Nationals Statistics this week.