The number of temporary workers has shot up in the past two years as workers seek flexible working arrangements.

The proportion of workers in temporary roles has leapt by approximately 20% in the last two years after a long-term decline, and the rise has been powered by an increase in the number of women taking them on.

Employers warned not to shirk responsibility for contractors

Lauren Thomas, EMEA economist at job review site Glassdoor, told HR magazine: “While at the start of the pandemic the increase in uptake of temporary positions was prompted by a lack of permanent roles, today employees, particularly women, are actively choosing more flexible work options.”

The proportion of women who work temporary jobs has increased from 5.5% of all working women to just under 7%, a rise of approximately 27% since late 2019.

Nearly two fifths (38%) of temporary workers said they chose temporary work because it gave them the flexibility to fit work around commitments such as education, childcare, or their own business, according to a study released today by flexible jobs platform Indeed Flex.

Minita Shah, head of recruitment marketing at Indeed Flex, told HR magazine that many workers prize the feeling of being control of their own work/life balance.

She added that many work multiple shifts a week for different companies, effectively working a full-time job with flexible hours and a variety of roles.

Many (40%) temporary staff said they work for at least three employers each month, and more than half (55%) work 16 hours a week or more.

She said: “It’s this flexibility, and the feeling of being in control of their own work/life balance, that some ‘flexers’ value above all.” 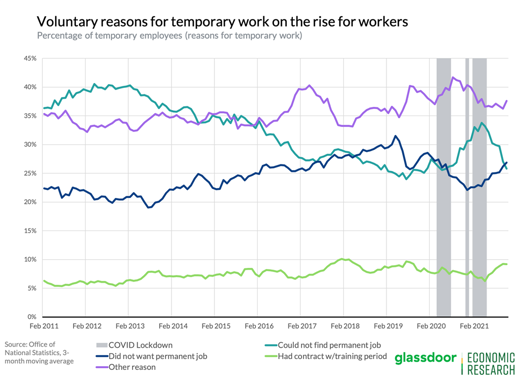 Thomas said: “People are using the lessons learned from the last two years to inform what they want from their next role.

“With vacancies at an all-time high, job seekers can afford to be choosy and the flexibility that temporary work can offer is holding an increasing appeal.”

The days of temporary work being a ‘student job’ are long gone, according to Shah: “A large proportion of our demographic are people who work as entrepreneurs, actors and creatives - many of whom run their own businesses and need to find work that fits around their passions.”

Millions more women in work than a decade ago

Sharp rise in self-employment among directors

Majority of jobs below Living Wage held by women