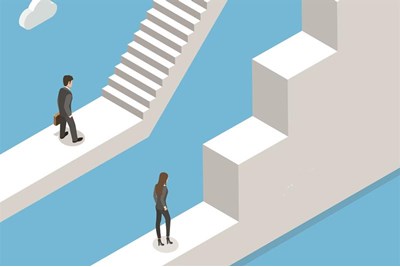 Women are pushing themselves harder at work to get ahead than men but aren't getting noticed for their efforts, according to research

The research also found that women were more interested in improving their skills, with 15% of women having attended a course or studied for a qualification to boost their credentials compared to 9% of men.

However, a separate survey of human resources executives and leaders found that the key drivers of women’s success at work are not related to working harder.

Lee Hecht Harrison's Elevating women in leadership report, which was separate to the survey, found that the top five behaviours for women advancing in the workplace are: being your own advocate, networking, a high degree of self-confidence, influencing ‘upwards’, and having a clear career path.

In terms of HR behaviours that can better champion women, coaching and feedback, flexible working opportunities, equal access to stretch projects, more exposure to senior leaders and decision makers, and recruiting/promoting from a diverse pool of candidates were all identified.

CEO UK & Ireland at Lee Hecht Harrison Penna Jeanne Townend said that women often assume they need to work harder rather than also looking into other ways of progressing. “When women hit a ceiling at work many tend to think just working harder and being better at their jobs will push them through to the next level. However, in our study we find the most successful women have additional attributes that accelerate their careers,” she said.

“Some of these attributes are about getting their work noticed… networking with stakeholders, being a self-advocate, and influencing upwards. Some of the attributes of successful women are more about the big picture, having a solid career plan and communicating it. I’ve heard of women who have been passed over for promotion because their manager assumed they didn’t want it.”

She added that employers have a responsibility to introduce policies that support women. “It’s not just up to the women. Businesses also have a role to play as well by ensuring the workplace is free of gender bias (even unconscious bias), addressing pay equity, and creating flexible work arrangements, which can benefit both women and men,” she said.

"This is where HR can really help; by being educated about the real-world challenges and bringing in changes that are proven to work. Some of the key attributes we found in companies that were most successful in elevating women were that they made it a clear priority and set metrics that helped hold leaders accountable. They developed programmes to help women develop the extra attributes that are proven to help them get noticed and move upwards.”

For the Elevating women in leadership report Lee Hecht Harrison surveyed 500 HR executives and leaders. It polled 1,246 workers in the research mentioned at the beginning of the article.