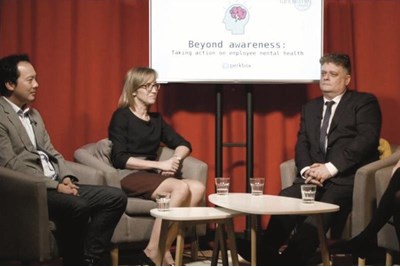 Our recent webinar explored changing societal and employer views on mental health, and what HR should be doing to support employees

“In the past 20 years in occupational medicine we’ve had a problem with mental health and have seen year-on-year increases in the number of people being signed off work with mental health [issues],” said Craig Jackson, professor of occupational health psychology at Birmingham City University, speaking at HR magazine and Perkbox’s ‘Beyond Awareness: Taking Action on Employee Mental Health’ webinar.

There’s no doubt that the long-overdue rebrand of mental health from a taboo to an important talking point has played some part in a rise in mental illness reporting. But Jackson was confident that greater awareness alone isn’t what’s driving up the numbers. Pressures are coming from all directions, he warned, including what he termed the “smoking gun” of email rollout in the 1990s.

“It’s no coincidence that occupational stress has been on the rise [since then],” he said, citing this “messed up relationship with email meaning it’s never been easier to give more work to people”.

The shift to 24/7 trading and the advent of social media have piled on even more pressures to always feel connected, Jackson added. “It’s 1pm on a Sunday afternoon when the majority of people start worrying about the next working week,” he said.

In the engineering industry rapid change has left workers vulnerable over the past 30 to 40 years added Sally Austin, group HR director at Costain.

“People do feel vulnerable about where their next role will be,” she said. “So from an HR lens we’re seeing increasing pressure for HR and line managers to do more.”

The figures tell an equally worrying story, with a staggering 83% of HR professionals believing mental health pressures on employees and rates of mental ill-health among the workforce are higher than ever before, according to a poll taken during the webinar. Not a single respondent thought pressures had lessened.

So with this in mind the panel set out to discuss how HR can and should provide employee mental health support.

Part of the problem, suggested Chieu Cao, co-founder and CMO of Perkbox, is that employees don’t always know about resources available to them.

“The bigger challenge is not just having services available, it’s the education piece,” he said. “[Proactive] employers are those that have open and engaging cultures so have created environments of psychological safety.”

However, Austin was “surprised” by the findings, having seen “pockets of industries where some are doing an awful lot”. But she conceded that “a lot more can be done”.

Don't be scared of the mental health conversation

Drilling down into the practicalities, there was debate over the effectiveness of one particular increasingly popular support mechanism. “I’ve not seen any evidence that putting mental health first aiders [MHFAs] into an organisation helps,” said Jackson, adding that he’s “sceptical” about this.

“If an organisation trains [physical] first aiders it’s not going to reduce accidents in the organisation, so why are we of the belief that training MHFAs will make a difference to mental ill-health in the workplace?” he questioned. Jackson explained that MHFAs can encourage people to speak up about their mental health, meaning employers “can do a temperature check”. But this won’t tackle the cause.

Austin countered that introducing MHFAs was one of the major steps taken at Costain. While admitting it’s “too early to tell if it’s the right intervention”, she emphasised “we have to do something”.

One concern Austin did raise about MHFAs was their own mental wellbeing. “What concerns me is what support is in place for [them],” she cautioned.

Jackson agreed the importance of looking after those supporting other people’s mental health. Giving the example of prison service workers, he said the “traumas” they experience “can lead them to also suffer vicarious traumas as well”.

This led to discussion of HR’s own mental health, as the function shouldering mental health support for the wider workforce. “HR and those on the frontline take these things on their own backs,” Austin explained.

“It’s very hard to switch off” and “the nature of HR professionals” means they don’t because “we’re not wired that way”.

No amount of support will compensate for poor-quality jobs, said Jackson. Referencing Aristotle, he said that “all work distracts the mind and if [people] are at work it distracts from their problems” so “work is good for you”.

“But we still have to be honest that not all work is good for you,” he said, pointing to organisations where employees are isolated, with little contact with colleagues, and have poor managerial support. There’s a correlation between lack of meaningful work and occupations most affected by the recession and Brexit and high suicide rates, added Jackson.

Suicide continues to be a challenging aspect of mental health for employers to tackle, said Jackson, with there being “very little workplaces can do to prevent suicide other than have meaningful good work”.

While prevention is difficult, how an organisation responds to an employee’s suicide is critical, the panel agreed. Austin recommended a “multi-pronged approach”, including “counselling on site, and wrapping arms around line managers and the HR team, and talking to the mental health first aiders as they take a huge knock when it happens”. Jackson spoke of the need for policies so HR knows how to respond and can help prevent a “knock-on effect” – because it “can lead to other workers attempting to take their own lives too”.

There are, however, several factors holding HR back from providing effective employee mental health support, the webinar found. An audience poll revealed lack of resource as the biggest obstacle (25%), followed by lack of senior buy-in (23%), and not knowing where to start (19%).

All obstacles can be traced back to senior buy-in, said Austin, which she defined as “one of – if not the biggest – factor”. “My interpretation of a lack of resources is a lack of senior buy-in. If you’ve convinced the top then you will get the resources,” she explained.

From what Cao has seen the “biggest hurdle is starting off”. “Like any other programme companies need to break the ice... make mistakes, and learn from them,” he said.

However, Jackson cited a different challenge altogether: that “we keep being subject to fads”. Pointing to the current focus on mindfulness he said that “without being the resident cynic, it works for some but not for others”. Rather than assuming the latest trend will work for everyone, he called on occupational health and HR to partner on evidence-based approaches.

For all the hurdles, Austin said things are moving in the right direction. “There has been a shift in the culture, language and behaviours in the past 12 months,” she said. “We’ve started to turn a tide.”