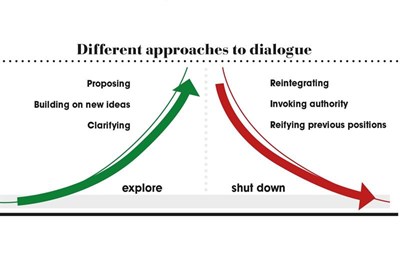 Organisational change approaches often focus on a sequence of technical steps to move the organisation from one steady state to another. Yet in practice, high failure rates are common for these initiatives. There is often little focus on the relational aspects of organisations – the complex and dynamic human power relationships that can either enable or constrain change in practice. Indeed, an organisation’s power relationships frame its whole conception of what the word ‘change’ actually means. Addressing the relational aspects of our organisations offers the prospect of more effective change efforts, and is the difference between ‘doing change to people’ and creating change with people. While this can be time consuming, and involves engaging with a wide range of perspectives, it can also help avoid many of the traditional issues associated with resistance to change. Dialogue-based approaches can be used to provide a framework within which to engage with the complexities of organisational relationships, and cyclic approaches to change can help identify the effects of power. In particular, Action Research offers a cyclic approach to making changes which involve whole systems, and overcomes a key difficulty of applying the conventional wisdom on change to organisations – that it does not take account of the specific context in which change is taking place.

The conventional model of organisational change is largely a structural one – viewing organisations as moving from one more-or-less stable state to another, using a sequence of prescribed methods. Models of change speak of creating a ‘burning platform’ so that people see the need to change, of the importance of creating management buy-in or the need to manage resistance. Mostly, we are more-or-less happy to go along with the idea that if we pull the right levers in the right sequence, we will get the change we desire. The only difficulty with all of this is that it doesn’t work very well. In fact, research suggests failure rates between 28% and 93% for change initiatives, depending who you ask and how you define success.

One reason for this is that organisations are not formed solely of structural qualities such as processes and systems; they have relational qualities too – the day-to-day dynamic human relationships which allow us to work together and get things done. But people don’t just come together and start achieving things, they need to organise themselves, and that requires the operation of power among the group. Power allows the members of an organisation to agree what needs to be done, who is responsible for what, and how the profits of the enterprise will be shared. But what is it? For the purposes of this paper, power is the ability to influence the framework within which dialogue and meaning-making takes place.

Power arises from meaning-making – from the creation of knowledge – because in creating knowledge we codify our world, arriving at descriptions of what it is and what it is not. In doing so, we create a kind of map of reality, emphasising some features and marginalising others, and the way that a group creates their particular map legitimises some behaviours and precludes others. Think of an oak tree for example. Some may understand the quality of its timber, what can be built from it and see its felling as a logical conclusion of its production. Others, however, may see the tree as an ecosystem, calculating its bio-diversity value and that of the organisms it hosts – such a group would view felling it as disastrous. Whoever is able to influence the sense we make of the tree has power, because the sense we make of things influences how we behave – and it’s the same for our organisations.

Without power, modern organisational structures would be impossible. Yet all structures both enable and constrain. While the ways in which we operationalise power enable control of day-to-day operations, they can also constrain change as an accidental consequence of the entrenched ways of thinking they require to operate effectively.

1. Our view of change is itself a result of how power is used. Although we tend to see change as an exceptional period in an otherwise stable organisational arrangement, some argue that change is with us every day, and that the way the organisation looks right now is a temporary phenomenon that arises from a continuous process of change (Marshak 1993; Stacey 2001).

At its deepest level, change involves the negotiation of new meanings (Ford & Ford 1995; Weick et al 2005), and the complexity of organisational life means that there will always be powerful interests who play a role in defining organisational meanings – including the meaning we make of 'change'.

2. The way that power is used to amplify or discourage the negotiation of new meanings can enable or impede our ability to change, however much we might want to. It can also affect the physical infrastructure of change – the processes, skills or machinery required, because the need for such things is negotiated among members of the organisation. This negotiation takes place within an existing framework of meaning-making and power relations. If that framework is left unchallenged, it can impede change by anchoring our perspectives in the status quo. Bounded by the existing framework of power relations, our attempts to change meet invisible barriers.

3. Different approaches to dialogue allow different responses, and as the conversation develops, the practices used by those involved produce outcomes that vary according to the kind of practice used. For example inviting, proposing, building, clarifying or affirming might be used to explore new meanings, while invoking authority, reiterating or reifying a previously stated position might be used to shut down such exploration and project a particular interpretation (Thomas, Sargent & Hardy 2011).

While in theory everyone has some voice in the organisational dialogue, people give greater credence to the opinions of high-status individuals. Conversely, lower status employees often have more influence over the organisation’s productive work. That work, however, requires more than simply following a list of instructions; it requires the initiative and commitment of those who do it. When power is used in ways which deny the voices of lower status members of the organisation, they may withdraw that commitment – often characterised in change initiatives as ‘resistance.’ Yet it is the attempt to impose a particular vision without the messy business of taking others’ views into account that actually creates resistance to that outcome. Simply put, we are most likely to meet resistance on the road we take to avoid it.

Our organisational dialogue relies on communication between people – what I say influences the response you give, and vice versa – it’s co-created. A change in the reaction that one participant gives at any point in the dialogue can change its direction entirely, leading to the creation of different meanings and outcomes. So if we want to influence power in our organisations, our likeliest route is to change how we respond. We’ve discussed how conversational choices such as inviting or clarifying can be used to explore new meanings, while reiterating or reifying can prevent such exploration. Our co-creation of power and meaning means that if we change how we respond, we influence the dialogue differently. We often need courage to implement this simple idea, but the power of a sustained conversational effort over time is not to be under-estimated. Change efforts can get so caught up in an action orientation – what to do to bring about organisational change – that sometimes an equally influential question, ‘how do I need to be?’, is forgotten.

The use of dialogic methods during organisational change allows us to work with networks of power relationships more effectively. A range of options exist to help with this process.

At the individual level, coaching can help decision-makers get to grips with their part in the change process – both how they affect it and how it affects them. In meetings, the metaphors we use can reveal a lot about power dynamics. Is change viewed as a battle? A journey? A process of growth? Simply pointing out our metaphors – and the approach to change they imply – can be a powerful way to challenge power without negatively impacting relationships.

For example, battles have winners, losers and casualties – whereas a process of growth requires care and nurturing.

Dialogue processes such as Future Search (Weisbord & Janoff 1995) or Open Space (Owen 1997) allow us to work with large groups, hearing voices from across the organisation. These approaches can be repeated whenever necessary, allowing cycles of learning to move our organisations towards their goals, rather than attempting a one-off ‘big bang’ approach.

Finally, Action Research is an effective cyclic approach to organisational change, through which organisations can become their own experts about which change approaches work for them.

Importantly, it allows organisations to identify how their own operating principles both enable and constrain them. The method is straightforward, accessible to anyone and uses cycles of change to learn about what is effective in the particular context of your own organisation.

We can’t always control our world. Sometimes we choose to make changes, sometimes we must change in response to events. Yet we can choose how we approach our world. Information technology managers had a maxim in the 1990s – 'no one ever got fired for buying IBM'. In other words, the conventional approach can always be justified, even if we doubt it will be the most effective.

Those of us involved in organisational change sometimes face the same dilemma. Yet if we ourselves can’t challenge traditional approaches in the service of more effective organisations, how can we expect others to change?

Stuart Pritchard is a writer and consultant, currently undertaking a PhD in organisational change at Ashridge Business School