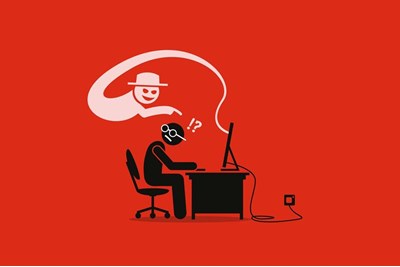 As regulators launch a campaign to warn against pension scams, HR also has a vital role in protecting employees

Victims of pension scams lost an average of £91,000 each in 2017, with 253 victims reporting a total loss of £23 million to national reporting centre ActionFraud.

Separate research from the Money Advice Service found that there could be as many as eight scam calls every second – equivalent to 250 million calls per year.

These findings come as UK regulators the Financial Conduct Authority (FCA) and The Pensions Regulator (TPR) launch a television campaign to warn people about the problem, particularly targeting those in their forties, fifties and sixties. They are also calling for people to ensure the pension firm they deal with is regulated.


Fraudsters typically approach targets by call, text, or on social media offering free pension reviews. Industry experts estimate that as many as one in 10 transfer requests could be scams. The full scale of the problem is still not yet known, with many scams going unreported.

Former pensions minister, Baroness Ros Altmann, has long lobbied for a ban on pensions cold calling. She told HR magazine that while she welcomed the campaign, more could be done.

"The scourge of scams is growing and the government’s proposals and campaigns are welcome, but they don’t go far enough, in my view, to actually tackle the problem head-on. I believe that all cold calls about pensions should be banned and the use of any leads obtained from cold calls must also be banned. That means that the FCA must instruct all regulated pension firms that they are not permitted to sell any products to people who have come to them via a cold call," she said.

"Currently, the rules rely on catching cold callers (many of whom are based overseas) after they have already caused the damage. They rely on the inadequate powers of the ICO [Information Commissioner’s Office] whereas using the product regulator as well would mean those who gather people’s names and numbers from cold calls would not easily be able to sell those leads. That would be far more effective in protecting workers from losing their pensions in a scam."

She said that employers could help to highlight the problem in the workforce.

"Employers can help highlight the problem of answering cold calls. No reputable company should cold call you about your pension – if you get an unsolicited call, just hang up. If you get a text or email – just delete it. Those are important messages."

Caroline Abrahams, director of Age UK, called the scams 'truly shocking' and said the government and regulators must act quickly.

"Scamming someone out of their pension is not just stealing their money, but potentially stealing the future for which they had worked and planned, so these statistics are truly shocking. A ban on pension cold calls is on its way, but it’s been a long time coming – the government must act quickly to put this in place before many others lose their pensions," she said.

“We know that scams are difficult, probably impossible to eliminate because when one loophole is plugged, the fraudsters move on to another. So the government, regulators and law enforcement need to be vigilant and prepared to act quickly to close down other investment scams as they arise."

There has been a surge in pension scams since 2015; when new rules made it easier for people to access their pension pots.

Nathan Long, senior pension analyst at Hargreaves Lansdown, believes these changes have left people vulnerable to fraudsters. "Rule changes that gave huge freedom to retirees have also inadvertently given fraudsters the pension equivalent of the keys to the sweet shop,” he said.

He added that it was best to ignore anyone approaching “out of the blue” about pensions. “Scams tend to have one thing in common despite their variety: they offer retirees something that is too good to be true. Your best bet is to ignore any approaches when you are contacted out of the blue about your pension. It’s safest to only deal with regulated firms allocating your hard-earned pension savings to regulated investments.”

Long said that ongoing education about pensions is the best way to protect people from scams.

“Short-term scam awareness is helpful, but endlessly putting a plaster on the problem is not good longer term. Bettering people’s understanding of pensions will also boost their resilience to scams, which is why the government’s midlife MOT initiative has the potential to be so valuable."

Guy Pink, former executive director of HR at Addaction and currently associate lecturer at Chichester College and a portfolio careerist, told HR magazine that the findings did not come as a surprise.

"Another pension scam with employees losing hard-earned savings shouldn’t be a massive surprise to those of us in HR... Pensions cost organisations a fortune to provide for employees, who often have no idea what they are providing, at what rate, or when it matures," he said. "The solution is a major national awareness campaign working with the pension companies to help streamline the understanding and what the implications are for employees."

Pink added that technology and apps could also be used to help people get a clearer understanding of pensions.

Caroline Nugent, HR director at the Financial Ombudsman Service, said that HR has a vital role in tackling pensions scams.

“This is a worrying trend that must be tackled by HR. Our role is to consider people’s financial wellbeing as we would any other wellbeing initiative. Highlighting support for staff and raising awareness of this issue is a small but significant step, as the cascade effect means they will in turn tell friends and family to be aware,” she told HR magazine.

She said that many employees who are struggling will not come forward out of fear of judgement, and encouraged employers to provide a space where people can discuss the problem openly.


“We know through working with Neyber for example that a significant number of employees have financial concerns that they do not necessarily tell their employers about through fear of being mislabelled, but we must have an environment where people can discuss the fact they have been scammed either directly or through an EAP service. Ultimately prevention is better than cure but anyone affected must be supported and HR is fundamental in this.”


"In most situations the employer will have contributed to the member’s pension fund, so it’s their money that’s being scammed as well as the employee’s. To help ensure that both the organisation’s and the worker’s money isn’t stolen, HR could use insights from behavioural science to help them understand how individuals may make decisions about money," he said.

"With these insights HR can raise awareness of financial scams, how they operate, and how they are designed to fool employees, as well as highlighting to individuals where they can go to get trustworthy information that will allow them to check if the scheme is legitimate."