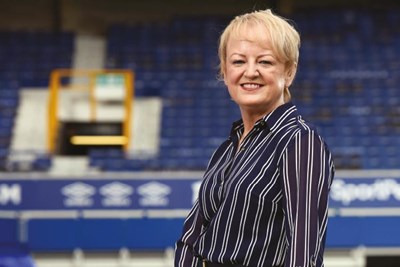 When Everton touched you, nothing's the same..

Before travelling to Liverpool to meet people director of Everton Football Club Kim Healey, HR magazine has already heard the phrases the ‘people’s club’ and ‘family club’ in relation to the organisation a fair few times. A walk through the city centre to the Premier League club’s head office in the Royal Liver Building and it all starts to fall into place.

On the busy high street HR magazine comes across a roadshow vehicle presenting plans for Everton’s new stadium and legacy project to members of the local community for feedback. If the crowds taking a look are anything to go by this is quite the talk of the town.

“Everton is a truly genuine club and we want to ooze that out to everyone – whether that’s staff, supporters or the community – everyone matters,” says Healey proudly as she gives us a tour of the Club’s new office along the city’s waterfront.

It was this family feel and vision to be the best (the Club’s motto is Nil Satis Nisi Optimum – ‘nothing but the best is good enough’) that Healey “couldn’t turn down” when she was approached to join as head of HR in 2015.

“I met Denise (Barrett-Baxendale, then-deputy CEO and now CEO) and she showed me her vision. What she wanted was to be the best, and to be in The Sunday Times’ Best Companies to Work For, which would make us the first football club to achieve that. And it was like: ‘er right OK and off I go’,” she says.

HR’s remit covers “every member of staff except the players”, including the first team manager, teachers at the Everton Free School, coaches and medical personnel at USM Finch Farm training ground, stadium staff and employees of the charity Everton in the Community. This totals 500 permanent and fixed-term employees and more than 950 casual and match-day workers.

The club has always retained its family feel and made good on its motto of excellence, with the team winning the FA Cup five times and lifting the UEFA Cup in 1985. Everton was also the first club to construct a purpose-built stadium and have a game televised. But employment and HR practices were in serious need of modernising when Healey joined – something football clubs in general have historically struggled with.

“Go back 15 years and HR in football was a lot less prevalent,” says Healey, referencing her time at Blackburn Rovers (her first job in football) and then Wigan, a club that had “never had HR”.

Coming from a “non-football background” this was all quite an eye-opener: “I got a lot of ‘Kim you can’t do that here, it’s football’. I had to educate people that ‘it might be football but let me give you some options’.”

First on Healey’s list at Everton was rebranding HR to “the people function”. Her aim was to move it from “a policing function” to a business partner model. “If we’re going to have that family experience with supporters then staff need to feel it as well,” she comments.

Another action taken early on to build HR’s credibility was Healey’s insistence that one HR person work every match day.

“That’s when we have the biggest population of our staff. We have about 800 casual staff on match days and they might have HR issues, so they need to know we’re there and where to find us,” she says.

This is all part of football becoming more of a business, and clubs realising they “need to attract and retain the best people they possibly can,” she says.

Tackling the issue of low pay in sport has been crucial to this shift. On the day HR magazine catches up with Healey national news sites have published reports of Citizens UK calling on football clubs to end ‘poverty pay’, and named Everton as one of a handful already taking action.

“I think it’s recognising that those working in sports clubs and facilities are affected by low pay,” explains Healey. “A lot of money in clubs goes into paying the players and you hear of staff who love the club so [people assume] pay doesn’t matter as much to them.”

Consistency around pay is also an issue, she adds: “In the past when people moved from other clubs there was no continuity, so you had staff and coaches all on different pay. We needed governance.”

So Healey set about creating a reward and recognition strategy for the first time. A seven-grade pay structure was introduced for all staff, and Healey committed to paying all permanent and casual staff the Living Wage. This meant that by 2016 Everton had become only the second Premier League club accredited as a living wage employer by the Living Wage Foundation (today it is still only one of four).

This commitment means encouraging suppliers, such as those employing car park attendants, cleaners and caterers, to pay the living wage as well. “If they want to do business with Everton they have to follow suit,” says Healey.

Now a principal partner of the Living Wage Foundation, the Club is involved in policy-making around the living wage and sharing its expertise with other sports organisations and local employers.

“I love a first step and a challenge – to be able to introduce something that benefits staff, the Club, the local community and now helping other organisations do this is a fantastic feeling,” says Healey.

“If we want to be the people’s club and attract and retain the best talent we must be paying a good wage,” she adds.

This “best talent” could be football fans; but it also might not be. Healey confesses that before joining the industry she sat in the latter camp. “When I went to Blackburn people said ‘why are you going into football?’ But I didn’t see it
like that; I was like: ‘I’m doing an HR job’,” she recounts.

Healey feels she still doesn’t fit the mould of a typical “football person”. But in this way she’s a great example of how powerful bringing different sorts of people into the industry can be, and how passionate all sorts of people will become about the Club, given the opportunity.

“When you’re working in a football club, because you know you’re working for that 90 minutes on the pitch and that’s what your job is for, you can’t not be passionate about it,” she enthuses. “I must be the biggest Everton fan going now. You don’t go home and watch Sainsbury’s versus Morrisons on the TV. But here you go home and see your job on the telly and look where we are on the rankings, so it becomes part of your life.”

She adds: “I don’t know if it’s my personality or what, but considering football can be seen as very male-dominated and I’m a four-foot 11 female, I’ve never felt uncomfortable to sit in a room with managers and coaches or felt I’ve been overlooked. My style wouldn’t suit a lot of industries but I’ve been able to take people on the journey with me.

“Perhaps because I’d just stand on the table until they’d listen to me,” she laughs.

It’s this personal journey that drives Healey’s commitment to making Everton’s workforce more diverse and ensuring an inclusive environment. The club launched its All Together Now D&I campaign last December to ensure staff, fans and people in the wider community feel welcome.

It has also launched autism awareness training so staff can provide support to fans. And Everton is the first Premier League club to become a Disability Confident Employer, a registered breastfeeding-friendly club, and to use its women’s team to launch a kit.

Everton’s new office, which it moved to last July, is also an important part of the Club’s quest to attract the best talent. Healey explains that the purpose of the move was to bring all employees under one roof in a state-of-the-art modern workplace that balances paying homage to the traditional stadium with offering a space centred around wellbeing and flexibility.

“We were all over the place in the stadium – because it’s very old there were little pockets everywhere. We were sitting under the rafters, people were squashed in like sardines,” she recalls. “It wasn’t conducive to good work or getting the best talent.”

And yet employees said they still felt siloed from each other after the move. Which led to one of Healey’s most quirky ideas, ‘Pass the Battenberg’, where one member from each team is taken for a coffee and Battenberg to meet different colleagues, then they get another Battenberg and have to pass it onto another team member who then goes the following week.

“I must have led a very sheltered life,” laughs Healey. “But it has integrated people more. And I think even people that don’t like change have grown to love [the new office] now.”

Healey is confident it will be a similar story with the new stadium, with proposals revealed in July for a 52,000-capacity stadium at Bramley-Moore Dock. It was also revealed that the current stadium site will be used for a community legacy project – the People’s Project – including homes, health facilities and education amenities.

“If planning permission goes through it will probably be a three-year timescale to build the stadium and it will be such an exciting project to be part of,” says Healey.

Which for HR will mean more changes in terms of strategy, she says: “We’re looking now at what the key priorities will be. It will be a bigger stadium so we will be looking at expanding recruitment and succession planning and making sure we have the right skills around catering, hospitality, pitch provision and so on.

“Then we need to look at what the new stadium team needs to look like, how it will expand, what skillset we will need… so that if and when the shovel hits the ground we’re ready.”

Before leaving Liverpool HR magazine is taken to a giant inflatable dome in the office canteen to ‘see’ how the new stadium will look. It’s a virtual reality experience space for employees and their friends and families to stay up to date with the plans – a fitting symbol of the modern direction the Club is heading in and the family spirit Everton is keen
to maintain.

Healey says she’s proud of how much football has changed in recent years. And she’s incredibly proud of how much HR has now achieved at Everton, with the team contributing to the Club’s history of firsts – and making good on Barrett-Baxendale’s original aim – by becoming the first (and still only) football club to make The Sunday Times list in 2017 and again in 2018.

“That was the brief I was given in my first interview and we did it,” she beams, adding that the Club is aiming for a hattrick this year. There have been other wins too, with Healey’s team winning HR magazine’s Reward and recognition award at this year’s HR Excellence Awards, and Healey shortlisted for HR director of the year.

“I’m now in my 16th season in football and I’m proud to see the change in the industry from where it was in 2004 to where we’re going now, and to be part of that change,” says Healey.

“We’re now seeing how the presence of HR in football can make a difference, and that the business side of football can work with the football side… towards one common goal.” No pun intended.

When Everton touched you, nothing's the same..