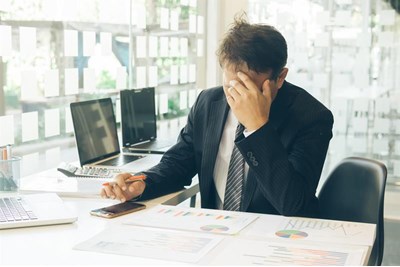 What also adds to stress and causes high anxiety is agile working - not knowing if a staff member will have a desk when they arrive at work. Totally understandable companies wish to save money, but ...

Sick building syndrome (SBS) is a worrying issue in UK workplaces, according to research from Remark Group

SBS is the name for symptoms you only get while in a particular building, usually an office, according to the NHS' website. Symptoms get worse the longer you're in that place and improve after you leave.

Remark Group's Air Quality and Wellbeing at Work Survey 2019 of around 1,000 UK office workers, revealed that 80% of employees think poor indoor air quality could be having a negative impact on their health. The same proportion reported that it could be having a similar effect on their productivity.

When asked about their company's meetings culture, 90% said they have up to 10 per week and 72% spend up to 11 hours in meetings every week, with 34% of these meetings taking place in rooms without windows. The research suggested this has a negative impact on employee productivity, with 90% saying they find themselves nodding off or losing concentration in meetings, and 25% claiming meeting rooms aren’t facilitating productivity or collaboration.

Additionally more than two-fifths (86%) of office workers said they get headaches at work, with almost a quarter (23%) getting them every day. Other symptoms reported include dry, itchy or watery eyes (78%), dry throat (76%), and itchy or irritated skin (70%).

Sleep quality is also affected, the research found, with only 11% of people describing their sleep quality as good during the working week and 25% as poor. Nearly all office workers (91%) reported that they suffer from tiredness or lethargy at work, with 41% saying they suffer every day.

Environmental psychologist and workplace wellbeing expert Nigel Oseland said the research shows SBS is still an issue for many UK workplaces. "While sick building syndrome is still spoken about it is not as prevalent as it was in the 1990s when it made the headlines,” he said. “Office wellbeing is of paramount importance and it is clear that a person’s work environment can impact significantly, not only on their health and wellbeing, but also on their performance.”

“I am shocked by the results of this survey, but not entirely surprised. While we are producing some great-looking modern offices we need to pay more attention to the so-called hygiene factors, such as good indoor air quality, temperature control and noise reduction. [We] need a concerted effort for a marked step change from sick buildings to healthy buildings. Everyone has the right to work in a healthy workplace.”

Kirsty Wear, head of talent at Blue Latitude Health, confirmed that a poor office environment can affect employees in a number of ways. “HR has known for a long time that a poor environment can be a major cause of stress for employees. It’s one of the many reasons remote working is increasingly popular. But shouldn’t we be demanding more from our working environments?” she said.

“Meeting rooms should be places where employees can feel relaxed and inspired. If they are, people will be more likely to feel they can be their true selves and be creative. How can you expect high performance when your people don’t get a basic level of comfort? Lots of employers are thinking carefully about office design, and you don’t have to have loads of resources and money to improve things. But companies that don’t could find themselves left behind.”

What also adds to stress and causes high anxiety is agile working - not knowing if a staff member will have a desk when they arrive at work. Totally understandable companies wish to save money, but turning up at the office and finding no work space and if finding one, finding it isn't set up correctly/is dirty all adds to causing an unhealthy work environment. A work place is where many hours are spent of your working life and it should be readdressed on how to make that work place inviting, where one can perform to one's best.

Maybe think about using a desk and meeting room sharing software package- working in real time - where employees book desk space or meeting rooms prior to turning up to the office, therefore relieving the stress or anxiety....its booked its yours!