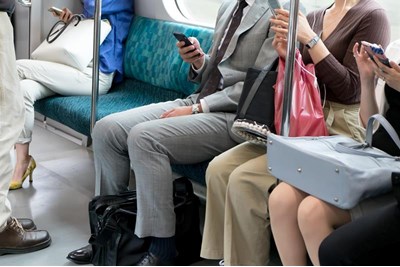 If ever anything was 'London ponce-y office job centric' this has to be it.

Sending work emails while commuting could be a sign of work/life imbalance, but the issue isn't always clear cut

Commuters use travel time for work emails to such an extent that this should be counted as part of the working day, according to a study by the University of the West of England (UWE).

The research, which studied 5,000 rail passengers on commuter routes into London, found that 54% of commuters using the train's Wi-Fi were sending work emails. Others were using their mobile phones' data connections for emails.

Interviews with respondents revealed that they considered their commute as time to 'catch up' with work, before or after their working day.

This time also enabled people to ‘transition’ between roles, for example from being a parent getting the kids ready for school in the morning to a business director during the day.

Speaking at the Royal Geographical Society (with IBG) Annual International Conference where the research was presented, senior research fellow at UWE Juliet Jain said: “If travel time were to count as work time there would be many social and economic impacts… It may ease commuter pressure on peak hours and allow for more comfort and flexibility around working times. However, it may also demand more surveillance and accountability for productivity.”

Responding to the research, people director at Virgin Money Matt Elliott said that while it’s critical that 24/7 connectivity doesn’t compromise work/life balance, officially counting train emailing as part of the working day or trying to prevent employees from working on trains could be too simplistic an approach.

He pointed out that many of the professionals working on trains before and after work may be benefiting from slightly more flexible arrangements than nine to five anyway; leaving work slightly early and working en route to pick children up from school for example.

“It’s basically a leadership and line management issue,” he told HR magazine. “I’d hope in our company for example that managers are making people feel comfortable to work in the way that works for them. We are trying to get away from dictating everything through policies.”

Elliott pointed out that maintaining work/life balance in the face of ever-growing levels of connectivity is a much wider issue than sending emails while commuting.

“For me the train bit is irrelevant; the real point is are people switching off?” he said. “What we want is for people to have a balance between work and life. And if there’s someone working for me who’s out of control I should be picking that up in other ways too.”

On a personal level, Elliott added that working while commuting has been a useful way for him to stay on top of things during particularly busy times as an HR director – allowing him to spend quality uninterrupted time with his family after work and at the weekends. Senior leaders must be careful to make clear that they don’t expect this of others, however, he warned.

“Where I’ve been emailing people early in the morning and after working hours I talked to my team to explain I didn’t expect them to respond at those times; I explained it was me protecting my family time.”

The majority (84%) of respondents to the survey, the jumping off point for a special Reclaim Your Time ebook supported by IBM, said that dealing with emails takes up a lot of or a fair amount of their week.

If ever anything was 'London ponce-y office job centric' this has to be it.

Really interesting research. Our email health algorithm takes into account commute times - and promotes thinking/decision-making about when not to be available. Working across different time zones can be an extra challenge to be "always-on".