LGBTQ+ discrimination has evolved, not disappeared 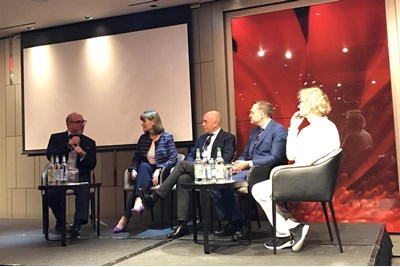 Discrimination against LGBTQ+ employees has evolved rather than disappeared, according to Daniel Winterfeldt, a partner at Reed Smith.

Speaking on a panel at the EUROUT 2019 conference, Winterfeldt said that while there has been progress in LGBTQ+ equality and inclusion in the workplace, discrimination still exists.

“Discrimination just looks different now. So are you getting fair bonuses and fair pay?” he said. “It’s just that people are politer about it.”

David Pearson, director of global inclusion and diversity at KPMG, said that 20 or 30 years ago the aim was for everyone to have “basic rights” in the workplace, as back then some people were losing their jobs because of their sexual orientation .

Pearson said bisexual employees face more barriers than other LGBTQ+ employees. “There’s a lot of gay inclusion, lesbian inclusion, there’s starting to be some trans inclusion, but bi? There’s not a lot,” he said, pointing out that other colleagues struggle to understand when someone has a partner who is a different gender to their former partner.

“There’s a lack of understanding even among people in the LGBTQ+ community. You’re put in a box and that takes you back to those days we were in 20 years ago,” he said. “So to say we’ve made progress in these areas unfortunately undermines our responsibility.”

Antonia Belcher, founding partner of MHBC, said “transgender inclusion is some way behind” as well. “We all want to be inclusive but in the trans community it’s hard to see that as there’s such a range of perspectives,” she said.

“And we’re behind the curve as we’re on the coat-tails of the LGB movement, so it’s hard to see how it’s going to develop across the wider business sphere.”

She spoke of her experience transitioning from a 40-year-old male in a “blue-blooded consultancy”, where she felt the only reason they didn’t want her to leave was for commercial reasons. However, some progress has been made on inclusion of transgender employees in the workplace since then, she said.

“Lots of organisations are doing trans training… but they have no employees who are visibly out,” said Winterfeldt. “It’s not easy to say what a trans- or LGBTQ+-friendly employer looks like as what it looks like on the outside might not be the same as on the inside.”

Policies and programmes don’t necessarily create inclusive environments, added Laura Holleman, managing director and general counsel in the investment banking division at Goldman Sachs. “It’s not about programmes; it’s about the experience people have in the workplace,” she said.

There’s a danger that many firms “rainbow-wash” the business but don’t actually provide safe environments, agreed Teun Hermsen, chief of staff Europe at McKinsey & Company. “We rainbow-wash corporate images but it’s about what happens in the workplace,” he said.

“Corporate activism is not CSR and it’s not rainbow marketing but it’s: do you create those safe spaces in Saudi Arabia, Africa, India and other countries [where laws and attitudes are less progressive] and do you connect people?

“So if people don’t have that safe space in the society they live in they can at least have some of that in the workplace. As we don’t change societies just like that but we can change things in our workplaces.”

The LGBTQ+ individual should feel “safe and sponsored”, said Hermsen, adding that it’s about “more than just feeling safe”.

The panel went on to highlight the challenge that, while young people feel more able to be out in the workplace, many senior leaders have spent their careers feeling unable to bring their true selves to work. “That’s the challenge with senior leaders,” said Holleman. “Once you’ve been lying to everyone for 20 years people think 'is now really the time?' So there are few role models for many reasons.”

The people who do choose to be open in the workplace also risk getting “role-model fatigue”, added Pearson. “For the person who is openly transgender in the workplace they become the person the business goes to about policies etc,” he said. “It’s tiring as they also have a day job.”

What’s most important is that employees are listened to, Pearson added: “If you’re in a privileged position it can be tempting to be the saviour, but you don’t necessarily know what other people might want and need. So go with humility and ask.”

Holleman agreed: “If we can’t find a path to understanding each other that involves shutting up and listening we can’t make any progress, as we all need to inhabit the same space. Inclusion is not about 'I’ll include you because I understand you, but not you because I can’t understand you'.”