Inspire employees by changing your space 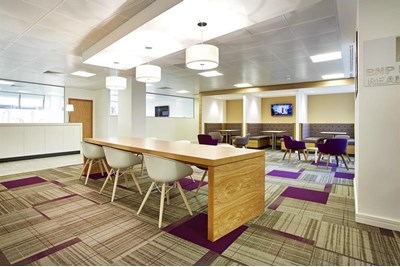 From de-cluttering to redesigning meeting rooms, we explore how companies are maximising space AND productivity

The challenge: To introduce a de-cluttered and paperless working environment to inspire both employees and visitors.

The method: Financial services provider BNP Paribas’ 115 Birmingham-based staff were not working as collaboratively or efficiently as they could have been thanks to being spread over two floors, and still wedded to paper-based processes.

“Facilities management put the business case for being on the same floor – both to work better, and to free up the second floor for leasing,” says Simon Robinson, senior director of BNP Paribas Real Estate. “The aim was to make the office as minimalist as possible, so in January HR introduced paperless working, moving to e-files. The only place staff can now store paper is in a locker box each member has.”

De-cluttering also involved providing cupboards for coats, and designing ‘zones’ for particular activities – for example printing and photocopying was moved to one central island. “To fit people into the single floor, we replaced 1800mm deep desks with sleeker 1400mm ones, and provided staff with two screens,” says Robinson. “It was still very much a facilities-driven project – for instance, moving more people into less space required adding new air grates and in-ceiling vents to enable more fresh oxygen into the floor.”

But there were clear HR considerations too. “HR wanted teams congregated together – for more collaborative thinking as well as quicker decision-making. Freeing up room by going paperless was the only way to do this.”

Robinson adds: “Also we were very clear that in going clutter-free we’d be realising other benefits too. Simply having a nicer environment is a retention benefit, but we flipped this on its head and talked about the attraction side too. We know that when people are being interviewed to join us, managers want to be able to show them around the office, so they can see the way we work. This new concept for the floor allows us to showcase the type of modern office young people want to see.”

The result: The six-week transition took place in March, and has also included replacing the reception area with a business hub, bespoke meeting booths, and tea and coffee bars. “Since the change, and to really bed-in the collaborative working culture we want to create, we’ve introduced ‘Move Tuesdays’ – where twice a month team leaders move somewhere different for that day so they can see other people and have new opportunities to spread ideas,” says Robinson. “This has only been possible since the introduction of paperless working, as it enables hot-desking,” he adds. “We’re only hitting 75% to 80% occupancy each day because the e-filing IT system also allows more working from home.”

He adds: “We’re not like factory units of production so we haven’t measured any potential boost to productivity, but we know staff enjoy being here more. A week after the change we had an anonymous email inbox created where employees could leave feedback around the change. None said they didn’t like it, or the new way of working; in fact the only serious request we got was could there be somewhere central for people to leave their umbrellas!”

Check back tomorrow for a case study on National Grid