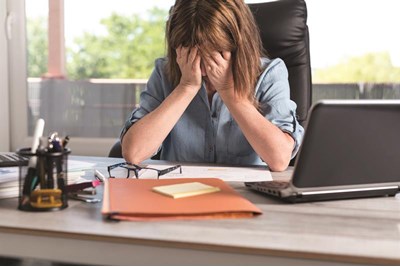 High levels of stress among HR professionals could be costing organisations millions a year in lost productivity, according to exclusive research conducted by HR magazine.

The research, in partnership with APeopleBusiness, surveyed 170 HR professionals about pressures for HR currently and explored respondents’ psychometric profiles.

It calculated the likely opportunity cost of stress-related presenteeism (defined as individuals being at work but not well enough to perform effectively) among practitioners. A figure of £1.5 million a year was calculated based on an average salary of £50,000. (However, 73% of respondents were manager level and above, meaning this average salary and lost productivity figure could be higher.)

Particular pressure points for all roles and seniority levels were accumulating workloads (cited by 45%), inaccurate job descriptions (40%), unreasonable expectations (35%) and, when it came to personal-life stressors, money (30%).

Nearly 50% of respondents reported being expected to work extra hours, of which 25% are expected to do so very often.

Regarding clear KPIs, 40% either didn’t receive feedback from their boss or felt feedback was unfair. The same percentage (40%) said they needed more training to carry out their job effectively. Additionally, 36% reported receiving no performance appraisals, while 35% said they did but this was a waste of time or left them feeling negative about the future.

Nikki Taggart, organisational psychology lead at APeopleBusiness, explained that reactive introverts were “likely to show a preference for a rule-based and process-driven working environment”, and so “given the fast-paced and currently uncertain political landscape, a higher intensity of stress levels” was more likely for this profile. (This chimed with HR magazine’s recent research, which found that 73% of HR business partners didn’t match the required stress and resilience profile for becoming future HR leaders.)

Kelly Swingler, founder of The Chrysalis Crew and former HRD at Genesis Housing Group, commented that the profession can often attract people fitting this profile because of reactive individuals’ propensity to want to help. “A lot of the time we’re also more likely to put other people first and by continuing to do so we don’t take time out for ourselves,” she said.

Liz Nottingham, executive HR director EMEA at R/GA London, said that the predominance of reactive introverts within HR could be less about the kinds of people attracted to the profession, and more the impact of working in HR. “We give a lot out to people. You’re only as good as your last interaction… We’re being reviewed and measured and judged all the time,” she said.

Given this, it’s crucial that HR receives much more recognition and support for the intensely people-facing and problem-solving work it does, she added. Otherwise HR’s own mental wellbeing, and in turn performance, will suffer.

“Consider the airline oxygen mask analogy of how individuals should help themselves before they are in a position to help someone else,” agreed Taggart. “All HR people should be in supervision, in the same way a coach would be. Because we’re coach, counsellor, therapist, Citizens Advice Bureau, legal, sage…” said Nottingham.

In light of this HR must become much better at drawing boundaries, she added, highlighting the link between high stress levels, high workloads and lack of clarity and feedback on job purpose.

“If you don’t define your role properly you end up doing everything from organising transport and coffees to exec-level recruitment and large-scale transformation,” agreed Swingler. “We need to get better at pushing back to say ‘that’s not our job’.”

A sense of being overwhelmed with work, and money as a source of personal stress, were also linked for Nottingham: “It’s that internal equity; thinking ‘hang on a minute, I’m holding all these people up and everyone thinks HR is just contracts and payroll…’ That’s when it becomes an issue.”

HR's mental health: Letting people in is hard but necessary, by Annette Andrews, chief people officer at Lloyd's of London