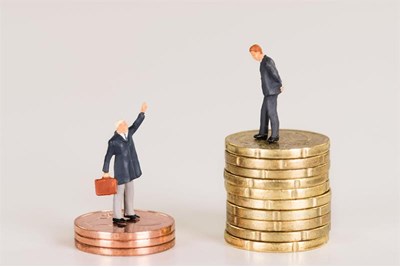 Executive salaries remain far higher than those of the average worker despite a slight decrease over the past year, according to research from the CIPD and the High Pay Centre

An annual assessment of FTSE 100 pay packages showed that median pay for chief executives fell by 13% between 2017 and 2018.

Forty-three CEOs in the FTSE 100 bucked the wider trend, receiving a pay increase between 2017 and 2018.

The research found that the majority (64%) of workers think that CEO pay is too high in the UK, with just 4% disagreeing.

The CIPD said that this year's overall fall in executive pay is likely down to a combination of factors including: greater restraint on high pay; less money being awarded through long-term incentive plans (LTIPs) because of variable corporate performance; and the cyclical nature of payouts, which sees a temporary spike in CEO reward every few years. Such ‘vesting’ cycles contributed to a fall in CEO pay in 2016 for example, followed by a large increase in 2017.

Complex LTIPs continue to form the biggest component of executive pay, despite criticism from a number of stakeholders, and were awarded to 84% of CEOs. Pensions also make up a significant amount of executive reward. As a percentage of base salary, CEOs get a pension contribution (or payment in lieu of) worth 25%. By contrast employees get a contribution worth 8% of their wages.

The research also highlighted that while women make up 6% of FTSE 100 CEOs they earn just 4.2% of the total pay. This marks a slight improvement on last year, however, when seven female CEOs earned just 3.5% of total pay.

Companies are required to put their future remuneration policy to a binding shareholder vote at their AGM at least once every three years, however the research suggested that shareholders are having little impact on restraining top pay.

Peter Cheese, chief executive of the CIPD, said that the findings show too many businesses are still taking a short-term approach to the success of their business: “Fairness is one of the biggest challenges facing society today. The gulf between the pay at the top and the bottom ends of companies is slightly smaller this year but it’s still unacceptably wide and undermines public trust in business.

“We must question if CEOs are overly focused on financial measures and are being incentivised to keep share prices high rather than focusing on the long-term health of their business. Being a custodian for the business and its people over the longer term must surely be a chief executive’s ultimate duty, rather than simply focusing on short-term gain."

He added that excessive exec remuneration must be reviewed by boards: “We need to challenge excessive pay, especially when too often it doesn’t match up to company performance. Boards and remuneration committees in particular need to review how they reward their top executives. They need to ask if it is fair when set against the overall reward strategy and practices of the organisation and if it is warranted in terms of performance.

“Success is the collective endeavour of the many, not just the few at the top. And that point has never been more important in these times of significant uncertainty.”

High executive pay continues to increase inequality in the UK, said Luke Hildyard, executive director of the High Pay Centre. “At a time when we’re struggling to generate economic growth, how pay is distributed between those at the top and everybody else becomes increasingly important. A slight fall in the pay of FTSE 100 CEOs is welcome and reflects improvements to the governance of the UK’s biggest companies, and a growing recognition of the need to address the rampant economic inequality in the UK," he said.

“At the same time, CEO pay awards and the share of total incomes going to the very richest in society remains very high compared to the level of 20 years ago. There is still more to be done to align pay practices with the interests of wider society and give the public confidence that our biggest businesses are working for the good of the economy as a whole rather than the enrichment of a few people at the top.”