Disability at work: The majority “silence” the needs of the minority 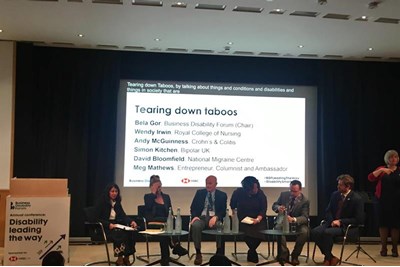 I am so glad we continue to air the subject of menopause. At SimplyHormones we specialise in training/learning processes for key personnel as well as women's groups in the workplace. We notice that ...

The majority sometimes silence the experiences and needs of the minority when it comes to disability, according to Wendy Irwin, head of equality and diversity at the Royal College of Nursing.

Speaking on a panel at the Business Disability Forum’s conference 'Disability leading the way', Irwin said: “The challenge comes when we deny each other the ability to speak. You have one group saying we need something different and another group says you’re not allowed to say that.

“Any group that demands your silence is not your friend and any group that requires you to be less than you are doesn’t support you.”

Women’s health conditions are especially shrouded in secrecy, she explained. “There’s something shameful” about them, she said.

“I see a distinct tilt in organisations – a tilt away from women and towards men and people who are able to hide effectively or fit a certain type,” Irwin said. “At the top of the organisation you can see a leaky pipe – recruitment and selection weeds out people unfairly not on the basis of talent.”

She called on organisations to “fix the tilt and mend the pipe” because “anything that stops dialogue stops growth”.

David Bloomfield, CEO of the National Migraine Centre, spoke of the taboo around migraines, despite 23.3% of adults suffering from them. At its most severe this is a “disabling condition”, he said: “It’s so stigmatised and so misunderstood – even by the medical profession."

There have been misconceptions that it is a “women’s issue” because more women suffer from migraines than men and the medical profession has traditionally been made up of men, he added

The panel went on to discuss the menopause, with entrepreneur, columnist and founder of MegsMenopause Meg Matthews sharing her personal experiences. “When I was hit by the menopause… I just wanted to get through the day… it is debilitating and there’s nothing you can do about it,” she said. “I thought I was having a nervous breakdown… I didn’t leave the house for three months.”

However, despite 13 million women going through the menopause today in the UK there is little information available to them and a stigma in society, she said: “There was nothing out there, nothing to tell you there’s 34 symptoms or how long it lasts. And I haven’t met one person going through menopause who has had the same symptoms.”

Matthews highlight how the word 'menopause' can’t be said on UK adverts: “It’s 2019 and you can’t even say the word. And about 25% of women in the workplace will most probably have taken their holiday days and sick days off because of it. I’ve been told the air con is still set to suit a man in a suit since the 1960s.”

“It’s only just starting to be talked about,” Matthews added.

“But there has been at least one case in law where it has been classed as a disability,” she said.

Also speaking on the panel, CEO of Bipolar UK Simon Kitchen, explained that bipolar disorder is also treated as a taboo in the workplace. “There’s a lot of awareness of bipolar but understanding isn’t where it should be,” he said, pointing to his organisation’s research on the topic.

“Ninety per cent had told their employer they had a bipolar diagnosis but 25% said they regretted their decision to do so because the employer wasn’t able to support them, and it had changed attitudes towards them in the workplace,” Kitchen said.

Fears of hiring someone with bipolar because they might do something reckless are misplaced, he added: “There’s only two professions you can’t work in – the security services and the army – every other profession you can succeed in… half of our staff have bipolar so there’s no barrier to succeeding.”

Misplaced ideas of Crohn’s disease and Colitis also exist, explained Andy McGuinness, campaigns manager at Crohn’s & Colitis UK. “People don’t want to talk about it,” he said. “They fear they’ll not be understood and people say it’s just a bit of a dickie tummy.”

He gave the example of the “tirade of toilet jokes in parliament” when, during the 2018 Autumn Budget, chancellor Philip Hammond announced that businesses would no longer pay business rates on public toilets. “We’re very British about toilets and toilet humour,” he said. “But for some people making sure they have access to toilets is really important.”

McGuinness explained that “part of the challenge is that it’s an invisible disability and part of it is that it’s a fluctuating disease so awareness is low”.

Gor went on to ask the panel if there was a language problem with how disability's approached in the workplace.

“The words 'to disclose' and 'to declare' a disability are interesting – it sounds like you have a secret or a criminal record. Is this language helpful? Should you not just be able 'to tell' people?” she asked.

If the person with a disability doesn’t want to tell their employer “you can’t entirely blame matters on employers”, said Bloomfield. However, he added that “it’s a catch 22 because the reasons not to put this forward might be to do with the employer” so there’s a need to break “the vicious cycle”.

I am so glad we continue to air the subject of menopause. At SimplyHormones we specialise in training/learning processes for key personnel as well as women's groups in the workplace. We notice that HR are not interested in the subject and yet they are key. Menopause is also not being heard in the C-Suite.

So true. Menopause needs to be talked about openly and more support and information for women. I am a woman with a disability. A visual impairment to be exact but I will admit that my menopause symptoms have been very disabling. Insomnia is torture!