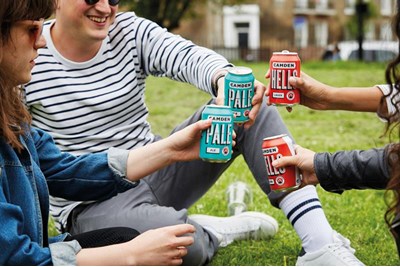 After rapid growth Camden Town Brewery wanted to help out its dedicated and hardworking workforce. Some struggled with a monthly pay day, so an app was introduced to provide early access to wages

Initially starting life in 2006 in a dilapidated Hampstead pub, Camden Town Brewery began to take shape when founder Jasper Cuppaidge decided to pursue brewing full time in 2009. By the following year the firm’s first beer had been created. In December 2015 the company was bought by Anheuser-Busch InBev for £85 million.

Since then the business has seen phenomenal growth, but its founder remains hands-on in the company. “Our founder is still very much part of the day-to-day business,” reports Claire Anderson, Camden Town Brewery’s head of people. “We’re very independent and our brand is very important to us. We’re growing 40% year on year; it’s very fast paced.

“It can be a lot of pressure, and we tend to bite off more than we can chew a lot of the time. But that’s what you get from being part of an entrepreneurial business. It’s an exciting place to be.”

With high growth comes high pressure. Staff were giving their all to help the business succeed, so Anderson was acutely aware that rewarding and supporting them could not bean afterthought.

The arrival of a new brewery (the company now boasts two breweries, one pub and one bar) brought particular challenges. “We commissioned a new brewery in Enfield two years ago, which has been a real journey so far. From a people point of view it has been quite difficult. We’ve reached a point where we’re at capacity there,” says Anderson.

Aside from the hard work involved, employees based in London – where the costs of living are some of the highest in the world – were also feeling the pinch of a monthly pay cycle, reports Australian expat Anderson.

“In Australia we were paid every two weeks. Here it’s very different, and we could see that monthly pay would be extremely stressful for some people. One of our employees always had rent due right before pay day, and you could see that it affected her.”

It’s a problem far from unique to Camden Town Brewery. The Centre for Labour and Social Studies found that 20% of British workers have a monthly shortfall of more than £100, and 10 million struggle to keep up with household bills, often turning to pay-day loans, overdrafts or credit cards to cope. Late fees and interest payments rack up, making it near impossible for people to get back on track, the think tank found.

With a stretched payroll department and tight resources, the task for Camden Town Brewery’s people team was to look at how it could offer staff more flexibility around pay. “There’s the argument that you just need to pay people more, but that’s not always possible,” says Anderson. “We wanted to look at how we could create a better, more flexible approach to pay.

“We would occasionally get people who wanted loans,” she adds. “When we were smaller that was a simple thing for us to do. But as we’ve grown it’s become difficult.”

So there was a clear need for a fresh approach to rewards and benefits. But Anderson knew from the off that she didn’t want this to be prescriptive.

“We started looking at benefits, and what we could offer to our staff, and really looking at what was important to them,” she says. “We didn’t want a ‘one-size-fits-all’ offer, and we know that our staff are all at different stages.

“We have commercial teams, sales and marketing, production,” she adds. “When you start looking at people in that way you understand that they have different needs and different lifestyles. We wanted to look at something that people could opt in or out of – that could be used to fit their individual needs.”

Enter Wagestream: a money app designed to boost financial wellness among workers. The app can be accessed at any time by employees and allows them to take out 30% of their wages before pay day.

“Wagestream got in touch with us, and had a chat about what it was doing. There are a few people offering this type of scheme, but Wagestream was one of the pioneers,” Anderson says.

It seemed an easy win. “We felt it was a no-brainer – we could offer staff more flexibility over the money they earned and how they could access it. It’s about giving them more autonomy over their own salary,” Anderson says.

Some people were really excited about it, especially if they had a life event coming up such as moving house. But there was initial push back from some. “There was some scepticism, because it was very new,” reports Anderson. “We learnt that you’ve got to make sure you are communicating exactly what’s happening via a few different channels.

“People were quite concerned that they’d take out too much money too quickly and get themselves into trouble.”

Luckily that feeling dissipated fairly quickly, partly because the people team led by example: “Our office manager and people co-ordinator both signed up to it themselves, which really helped to pave the way for others”.

The people team made it clear that the scheme was optional, however. Speaking about finances can feel intrusive for some, explains Anderson: “If it’s not important to them that’s fine. They don’t have to access it if they don’t want to. But it is always there if they need it.”

Regular internal communications were key: “We have a company meeting every two months, and we put posters up, and we talked to individuals. We needed to make sure that we were always open to people asking questions about it without ramming it down people’s throats. It’s an education piece.”

Wagestream proved popular very quickly. Within three months 30% of employees had started using the app. Staff generally withdraw around 15% to 25% of their earnings per month.

Anderson believes that this has helped strengthen staff’s relationship with HR, as employees have been keen to share their stories of how the technology has helped them. One employee, Anderson says, was able to pay for an unexpected parking fine without having to turn to credit.

“It’s something that has really helped people and that has become a staple of how we run things. It closely aligns with our values, and it’s a great thing to introduce new starters to. [When] we mention it to them their faces light up,” she says.

Given its success, Anderson plans on rolling Wagestream out further afield within the next month: “We haven’t been able to offer it in our bars because we haven’t got the systems in place. We started it with permanent staff – anyone who has been on a permanent contract – but this will soon be with our casual staff and bar staff too.”

It’s also led the team to explore financial wellbeing more broadly, with HR taking a more active role in communicating about pensions and other money matters.

“On a personal level I know how hard it can be sometimes to manage money. The pay system is incredibly rigid – and for what purpose?” muses Anderson.

“It’s a process that has used up little time and been incredibly low cost. As an employer I don’t see why you wouldn’t want to help people out with it.”