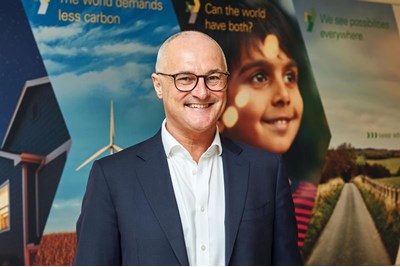 Really interesting and I love the idea about HR creating / catalysing an ecosystem. But "HR professionals need to be businesspeople first who just so happen to look after the people agenda." hugely ...

The oil and gas giant’s group HRD has a very clear idea of how HR can help the business transform and be fit for the future. Technology, young people and reverse mentoring will all play a part

It was Oscar Wilde who wrote ‘it is what you read when you don’t have to that determines what you will be when you can’t help it’. It’s a maxim that perfectly epitomises group HR director at BP Helmut Schuster – a man whose office contains books on many topics far beyond HR.

“Did you know a cursive ‘swish’ font is the best one for a drinks menu?” Schuster asks in relation to a tome on typography atop his desk. “The flourishes give a more luxuriant feel. Studies prove customers buy more expensive bottles when printed in script fashion rather than in plain lettering.”

He adds: “Interesting isn’t it, how we as HR professionals decide to present staff communications?”

Schuster is one of life’s thinkers, finding intellectual stimulation from a wide variety of unexpected sources. “When I was young I had to do a year’s military service,” he recalls. “That gave me lots of time to think. I realised I didn’t want to be an economist [the subject he read at the University of Vienna], so with the clock ticking I went into marketing at Henkel.”

As for many HRDs one thing led to another, with Schuster specialising in branding and then taking on an employer branding role in BP’s refining business. This morphed into him taking on greater HR responsibilities. And after 22 years at the oil and gas giant – now the 12th-largest company by revenue, employing more than 73,000 people – he finally got the HRD role in 2011.

Not that during this time he has grown to think of HR as a clear-cut discipline. “HR is not at all a codified function,” he says. “I even hate the word HR. What my team and I do is a mix of marketing, branding, reward, compliance, development and everything in between. The longer I’ve done it the more that’s become apparent. While people are what make businesses successful, HR isn’t managing them; it’s really about creating an ecosystem.”

BP recently predicted that renewable energy will account for 30% of all electricity by 2040, up from an estimate of 25% last year. And so, considering BP is in the middle of particularly uncertain and fast-changing times, perhaps the above is about as definitive as Schuster can be in summarising what his broad responsibilities involve.

Right now the organisation has to transform; for example through a venture capitalist division investing in new start-ups such as AI firm Belmont Technology, which BP put £4 million into in January. But it also can’t ignore its heritage. For instance, it is still predicting oil and gas growth of 16% between now and 2025 as world demand for energy is forecasted to grow a third by 2030.

This presents unique talent challenges. As does the fact that some of the businesses BP invests in are more for stakeholding purposes – leaving their employees to work outside BP’s control. Others such as Chargemaster, the UK’s largest electric car charging network bought for £130 million last year, are absorbed directly into the company. (This latter acquisition was made to allow BP to speed up the introduction of ultra-fast electric charging points at its network of 1,200 UK service stations.)

So how does all this occupy his thinking? “The one advantage HR has over other disciplines is that it has the ability to think about the long term,” says Schuster. “My main message to the board is that infive years’ time this company will be competing for talent that has never worked – or even thought about working – in our industry before. That’s a big challenge. We need to come up with new avenues to do this.”

Such genuine excitement about what the future holds will no doubt be a welcome change for BP. It’s only just starting to put the 2010 Deepwater Horizon accident (which killed 11 people and caused a major environmental disaster) behind it. It wasn’t until last year that BP announced it was finally reaching the end of its £52.8 billion compensation process, and investors seem determined that this marks a turning point. Dividends were raised for the first time in 15 quarters earlier this year, while over the Summer BP announced it would report how its strategy is consistent with the 2016 Paris Agreement on climate change.

As part of this process of ringing in innovation and change Schuster and the rest of the executive board travelled to Silicon Valley earlier this year to gain insight into fast-moving start-ups doing the sorts of things BP wants to do. “We have to rediscover and understand how we will need to make money,” he reflects. “We then need to figure out what this means for the financial plan. Adding colour to these numbers is part of the challenge for HR.”

It’s a challenge Schuster clearly enjoys. “I really feel passionate about this,” he says. “It’s an opportunity that gives you a spring in your step. We have a number of ventures where I feel BP will be recognised externally as the catalyst for change and a force for good – which is great for attracting talent. Our brand is about needing more power but with fewer emissions. And my job is making sure we attract people who are inspired by this.”

He adds: “We want people that have what I call ‘IQ, EQ and drive’ – the ability to learn, connect with others, and push through their ideas. These are the sorts of employees that will have great careers here if they want to.”

But none of this big-idea thinking can happen without also transforming the HR function itself, which at BP numbers 1,900 people globally. Schuster is well known on the HR speaker circuit as a ‘transform or die’ advocate. HR must call out and be part of influencing what businesses need, he feels.

“HR’s really about creating trust,” he says. “HR professionals need to be businesspeople first who just so happen to look after the people agenda. We can’t exist on our own and as a function we must all understand this. We must act as catalysts.”

This perspective perhaps explains why Schuster is such a passionate believer in HR needing to improve its digital competencies. “Companies are essentially about two things: people and technology,” he says. “If HR’s role is to get out there and tell people about the future careers they’ll have with us HR has to become digital. It has to appeal to young people, and talk their language.”

He adds: “We’ve recently implemented Workday, so everything we do is much more intuitive and does more to drive our business strategy.”

Part of his plan for improving the function involves strengthening HR from the bottom up. During the interview with HR magazine a third person, Emily Gupwell, has been quietly listening to her boss. Gupwell is one of three HR degree apprentices BP has hired in the past year, and hearing Schuster proselytising is today’s lesson.

“I realised I wanted university-level education but without the debt this leaves you in,” explains Gupwell. “I also wanted to experience business but not just in a silo, and I believe HR gives me this broader remit.”

The scheme is run by WhiteHat – a 2016-launched apprenticeship provider, which this Summer made headlines for securing £13 million in investment and which counts Google among its clients. While the company might be unfamiliar to some, most will have heard of its co-founder Euan Blair, son of former prime minister Tony Blair.

“[Euan is] a great person, a real tech visionary, an example of just the sort of young talent this country is producing,” says Schuster. “Emily will be rubbing shoulders with people that might have joined us from Cambridge or Oxford on our typical graduate schemes, proving that real social mobility and learning in HR can both happen if you trust in it.”

Surrounding himself with and supporting young talent is an obvious pleasure for the 58-year-old HRD. Refreshingly he also takes the view that the relationship he has with his younger team members shouldn’t be one way.

Levi Lundgreen (in his twenties) is Schuster’s executive assistant, and also sits in on our interview. Picked very deliberately – “because he’s a Millennial” – Lundgreen has quickly become a colleague Schuster holds in very high regard.

He often acts as a second pair of eyes, giving Schuster advice on decisions. “He takes my notes then improves on them. We’re brutally honest with each other,” he says. “The only rule we have about working on documents is that after every exchange what we produce has to be better than it was before.”

Lundgreen has also ‘Appleised’ Schuster. “I’ve finally been brought up to technological speed,” he says. “All my files are now in the Cloud; in shared folders that anyone on my HR team can access. Any data, any request for insight, any facts and figures that people want can be accessed by me on my phone there and then. I no longer have to say ‘I’ll get back to you’. It’s part of my own journey to becoming more digitally native.”

As an organisation BP has run reverse-mentoring schemes for the past five years. According to Schuster the benefits of this are really coming through now, with young employees educating the older generation about what needs to change.

“We must all accept that we can learn much more from each other,” he says. “Two brains are always better than one. You have to connect people from different generations now. It’s just the way it is. I’ve partnered up our global services head with a new hire from Brazil – just to talk about ‘stuff’. It’s as valuable as any formal L&D.”

So it’s with verve and very evident energy and passion that Schuster approaches creating a new BP ecosystem (and the type of business he wants BP to morph into). And there’s no doubt he’s equipping his HR team to make sure this happens.

As our interview draws to a close Schuster has one last thought to impart: “Don’t whatever you do talk about ‘people strategies’. I hate this phrase as much as I hate the word ‘HR’.”

He adds: “What you need to have is a corporate strategy. The people part of it is simply the people agenda. Now get on with it.”

Really interesting and I love the idea about HR creating / catalysing an ecosystem. But "HR professionals need to be businesspeople first who just so happen to look after the people agenda." hugely undervalues what HR can provide. Schuster is absolutely correct in suggesting that two brains are better than one, so what's the point echoing the same thinking as everyone else in the rest of the business?