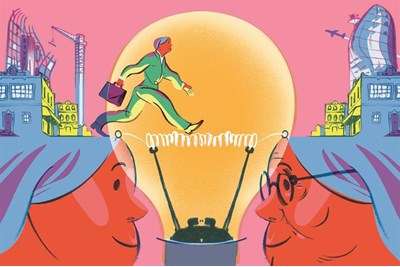 Not too long ago almost all conversations about automation would be reduced to talk of robots stealing our jobs. But as we’ve settled into the ‘fourth Industrial Revolution’ that conversation has become more nuanced. From journalism to law, manufacturing to customer service, AI is transforming the way we work. But is AI also affecting how we develop staff?

The jobs hit hardest by AI and automation are those at the entry-level low-skilled end of the spectrum. A recent report by the McKinsey Global Institute examining automation of work across 315 US cities found that entry-level workers were the most at risk of being displaced by AI. While the Office for National Statistics’ chatbot ‘told’ HR magazine that 45% of roles performed by those aged 20 to 29 are at risk of automation, primarily because they are entry-level positions that require little skill.

So it seems that being a trainee no longer means spending hours on more menial exercises. Instead these tasks are now the remit of chatbots and robotic process automation (RPA) software.

While many see this as a positive thing, freeing up time for junior staff to take on more strategic tasks, it also means that the ways new joiners learn the ropes must change. Those ‘boring’ junior roles are often seen to be the very experiences that make people work ready and able to bridge the gap between entry-level roles and senior positions.

So in reassigning these routine tasks do employers risk removing an essential part of the training process for new employees? And if so, what can they do to ensure that entry-level workers are still learning the critical skills they need to rise up the ranks?

With automation touching most sectors to some extent, the challenge is not unique to any one industry. On the face of it accountancy and hospitality might not have much in common, but both industries have seen automation affect the structure of entry-level and training roles. RPA software such as Inflo has become a common tool in auditing. While in hotels around the world chatbots and self-service kiosks have replaced concierges and receptionists. Here’s how employers in these sectors are rising to the challenge and bridging the gap between entry-level and more senior roles.

Edwardian Hotels London introduced its virtual host Edward to its 12 hotels in 2016. Edward is programmed to perform more than 900 interactions and uses a Natural Language Understanding interface, meaning guests can have a normal conversation with him as they would with any human. The chatbot can take a room-service order, tell you what time check-out is and even recommend local bars and restaurants. Now 69% of all guest requests come through Edward.

“Our prime reason for [Edward] was looking at how we could make our processes as efficient as possible, as well as increasing guest satisfaction,” comments Caroline Marais, general manager for human resources across the group. “What we are trying to do is free up time for employees around the basic tasks, so that we could really focus on the service part of the job.”

But with chatbots creating more distance between the customer and staff, are junior employees getting enough exposure to the customer service experiences that the industry relies upon?

Marais acknowledges the concern that automation could affect how basic skills are acquired. But she says Edwardian Hotels London’s approach ensures valuable experiences are retained by staff.

“The [basic tasks] that we’ve removed are important but not memorable. A guest isn’t necessarily going to remember ordering room service for example, unless the experience is particularly bad,” she says.

The way Marais sees it, the ability to create memorable guest experiences is far more valuable to those wanting a career in hospitality than an in-depth knowledge of menial tasks and procedures.

Automation of entry-level tasks in hospitality is good for career progression, agrees Iis Tussyadiah, professor of intelligent systems in service and head of the department of hospitality at the University of Surrey. “Often people go from one department to the next to understand how things work holistically, and then maybe become a general manager in a few years. This is still really important to have at entry level,” she comments.

“But I think automation is making career progression faster, because it makes it easier for employers to focus on better training.”

Indeed it’s no coincidence that in the same year Edward was ‘born’ Edwardian Hotels London launched a 10-year partnership with Imperial College Business School to deliver training for future senior managers. The hotel group puts 250 staff through this training every year.

Marais explains that, rather than creating a future skills gap, automating entry-level tasks and providing this formal training to help staff progress to senior positions will ultimately result in better-equipped managers. “We believe that we’re giving them the skills to continue within our company and within other companies – we’re actually giving them greater service skills,” she adds. “It’s as if the design of [automation] is generating more time to train people on fundamental hospitality skills.”

In accountancy RPA has become a vital tool in auditing and book-keeping, reducing the hours spent on routine tasks like extracting transactional information – an exercise that might previously have been allocated to trainees. Such is the impact on the profession that the Institute of Chartered Accountants in England and Wales (ICAEW) has recently announced changes to its syllabus, with future students being trained and examined on how to use RPA technologies to interrogate client data.

“The qualification is designed to reflect what’s going on in the workplace. Audit workflow is all done with software now, and analysis is done by people. Having the skills to do the analysis is absolutely crucial,” says Adam Birt, head of qualifications, strategy and development at ICAEW.

This view is echoed by Graham Burnett, head of talent development at Mazars UK: “This is definitely a wider issue within the industry and has been voiced by a number of firms.”

Mazars is addressing this concern by working with tuition providers and training bodies, as well as adapting its own internal training. Burnett says the firm has introduced a LinkedIn Learning library to ensure trainees are still acquiring the basic skills they’ll need to progress – something he feels also presents an opportunity for employees to stand out from the crowd. “Those that seek out that level of understanding, despite lack of practical experience, will be able to progress in their future career because of [their] expectations of the understanding,” he says.

Jessica Damms, HR director at Kreston Reeves, says the challenge for learning and development teams is to pre-empt and prevent a skills gap emerging between entry- and senior- level roles. “We encourage our people not to become reliant upon [automation],” she says. “Individuals still need to understand how and why systems do what they do, so we train the fundamental accounting skills outside of automation.”

On the face of it those fundamental skills may appear to be rudimentary box-ticking, she concedes. But they are vital when it comes to adding value to client relationships. “Crucially what automation does is create space,” she says. This is a space that Kreston Reeves is using to train employees in advisory and relationship skills as well as basic accounting practices, she adds.

As Damms warns: “A future skills gap will certainly emerge should we not adapt.”