Balancing trust with control noted as key challenge for employers 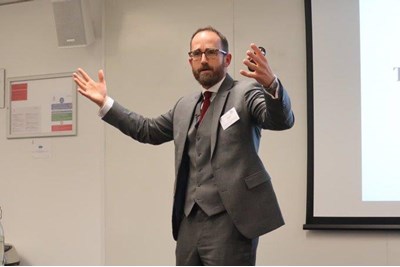 This was the takeaway message of February’s HR Connection event, held at Cass Business School in London last week.

Speaking at the event, Tom Cassidy, head of leadership and executive coaching at Working Voices, said: “The control element has become so rife in organisations and in society now, and I think psychologically a lot of it is a reaction to not knowing what's going to happen. Uncertainty draws out a lot of control.”

When it comes to introducing more flexibility into how, where and when people work, one of the first obstacles to change is the element of control.

“People feel that if they can control everything then they'll be managing,” said Cassidy.

He suggested the goal is therefore to challenge the way people think and influence their decision-making.

Describing his concept for influence, Cassidy outlined Roy Baumeister’s ego depletion model. “If you have say 100 chips each day, of your self-control, each time that you pass Starbucks or Krispy Kreme and you have to give away that little bit of self-control not to go in and buy something you're giving away a couple of your chips.”

When wanting to change minds or introduce new concepts of working the mistake people make, Cassidy said, is that they try to influence people when their “chips” are depleted – when their self-control is at their weakest.

“You actually want to find people when they're high on self-regulation units, and there are specific times during the day when people are high on these,” said Cassidy, highlighting that first thing in the morning or after lunch are typically high points. He added: “This is a really simple idea that hopefully you can apply straightaway.”

For Nick Smallman, Working Voices’ founder and CEO, critical thinking is one of the company’s key recommendations for organisations wishing to strike a better balance in their trust and control.

Cassidy and Smallman both pushed the need for more “advanced critical thinking” in which people are encouraged to question more of the world around them and, as a result, understand the benefits of certain changes.

Cassidy concluded: “It’s about line managers being capable of managing and dealing with the world as it is now. And leaders knowing and being able to make good judgements on up-to-date models of how their organisation really is.

“And also individuals who are able to make advanced critical-thinking decisions, because they're able to question what they're seeing around them.”