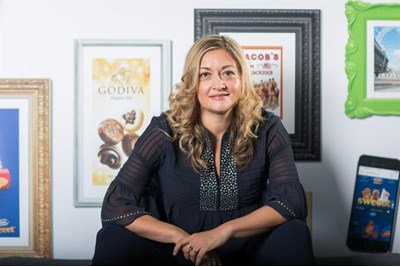 There are a few sure signs it’s just a couple of weeks from Christmas. The John Lewis ad has been released and scrutinised to death, coffee now comes in a baffling array of flavours, and ‘Merry Christmas Everyone’ is being played with Ground Hog Day-esque frequency everywhere…

Another more subtle sign: family-sized Christmas biscuit boxes quietly arriving in homes up and down the country. For nothing says ‘Christmas’ quite like arguments over who gets the last foil-wrapped biscuit (illogical, they’re all delicious).

But while the beginning of December might be around the time most start stocking up for Christmas Day gorging, the brains behind festive treats start much earlier. And what most won’t realise as they tuck into their boxes of McVitie’s Family Circle favourites or Victoria chocolate biscuits, is what a busy and important year the company behind the UK’s best-selling biscuits
has had.

The McVitie’s brand goes way back – to 1830 when apprentice baker Robert McVitie and his father William opened a ‘provision’ shop in Edinburgh. But last year saw owner Yildiz Holding decide to consolidate this business with its other iconic confectionery brands Godiva Chocolatier, United Biscuits, Ülker and DeMet’s Candy Company to form a new UK-based company. The aim: to create a £3.9 billion business and global leader in its category.

Erica Coletta, CHRO at new entity pladis Global, was chief HR officer at Godiva when she received ‘the call’.“I was very happy living in Manhattan, and I was having a lot of fun. I loved Godiva, I was set to stay… until my owner called me,” recounts Coletta, who’s from Rome originally and had lived in the UK before when working at Unilever, and before that working in HR in oil and gas. “So I had to convince my other half that this was a great idea to come back.”

But Coletta hasn’t looked back, with the experience proving just as rewarding and career-defining as she’d hoped. “This has been the best job I’ve ever had, but the most challenging,” she reports.

It’s easy to see why. With 36 factories in 13 countries, pladis employs 26,000 people in total.
In position since September 2016, Coletta’s task has been to integrate all staff by creating one global culture and way of doing things, boosting collaboration across pladis’ brands and regions, but also while honouring each individual brand’s history and the strengths they can all bring.

It’s not only McVitie’s with a family history going a fair way back. Godiva was born in 1926 when Pierre Draps Senior first handcrafted praline chocolates in the workshop of his Brussels home. The number one biscuit and confectionery brand in Turkey and the Middle East, Ülker meanwhile goes back to 1944 when it was founded by Sabri and Asim Ülker, two brothers whose parents immigrated from Crimea.

“I’m always saying to everyone: ‘it’s about the three Hs’; they’re very important to me,” says Coletta. “One is about honouring the past – for pladis there’s so much to honour: our heritage with Ülker, the geniuses who invented Godiva… There was a lot of honouring in terms of what I found in HR too: the practices in all companies.”

There was also much to learn from Ülker around engaging Millennials. “Turkey is probably one of the youngest markets, so there was lots Ülker was already doing in terms of things like reverse mentoring…

“Then there’s Idea Star, which is Turkey best practice that we’ve rolled out worldwide and improved,” says Coletta. “It’s a bottom-up innovation process where all our employees can come up with great ideas on different areas of the business; from product to commercialisation to digitalisation.”

But was Coletta tempted to prize Godiva’s HR strategies and approaches above all others? No: effective HR should anyway always be about continually reassessing what you’ve already put in place and being willing to get rid of what’s not working, she says. Moving from a role at one brand into overseeing HR at a whole range of consolidated businesses is excellent training in ‘killing your HR darlings,’ she says.

“In HR generally you have to maintain a certain balance of what’s good and what can be improved,” she says (Coletta’s second ‘H’ is honesty – being “honest about the present”). “You can’t get attached to certain things or people. I had a huge attachment to Godiva but I was always very clear that I was coming into brands like Ülker who you have, frankly, a lot to learn from.”

As evidenced by the speedy global rollout of bottom-up ideas schemes, an agile enterprising spirit is a cultural trait Coletta is determined to instil. Key to creating such a pladis-wide culture is ensuring the right people ‘are on the bus’.

She points to the five traits created for the company: purpose-led, agile, collaborative, resilient, and positive. “We are quite transparent that we won’t be for everybody,” she says. “Because we’re a car that has been built when driving at 100 miles per hour. We thrive because of people’s ability to break new ground. But if you are here for the status quo or to have a super large team then you’re not for us.”

The FMCG sector (fast-moving consumer goods) pladis inhabits needs to move ever faster, Coletta explains. While many will this year enjoy Christmas biscuits in the same reassuringly familiar format as past festive seasons, they’ll also likely be enjoying other much newer McVitie’s innovations – Nibbles and Thins perhaps.

Sticking with McVitie’s, Coletta points to new protein bar Why Nut? as an example of the company’s agility in keeping pace with ever-more demanding consumers. “Why Nut? is a good example of a bunch of people talking to each other with a great idea,” she says. “That was less than five months from idea to supermarket shelf… The key is keeping up with consumer choices with the right offer at the right time.”

Also vital is recognising that it’s no longer good enough to simply make products, says Coletta. “As FMCG we have to take our strength as being makers but project that into a future where our business is about experiences for consumers. It’s talking to the consumers in a digital world that is relevant to them, that talks to them live.”

She adds: “Being makers of experiences requires a completely different skillset. So we’ve done a big capabilities assessment to say ‘fine we’re here, but what are the capabilities we need for the future?’”

Bottom-up empowerment extends right to pladis factory workers, reports Coletta. “Reach for the Stars [a Dragons Den-esque programme] will be extended to our factory workers very soon,” she says, explaining that already a lean methodology is used to give workers a voice in suggesting improvements.

As you’d expect with such a large-scale, global consolidation, unifying HR systems and processes is a significant ongoing project. “Last year we set the ground for implementation of a worldwide HR technology platform,” Coletta reports, adding: “We built one performance management system, a new bonus scheme, one new reward framework, one code of conduct, one new social media policy…”

It’s crucial, however, to get the balance just right, says Coletta, between globally consistent best practice and tailoring HR practices to suit local settings. “There is this notion I’ve worked with for many years around freedom within a framework,” she says. “I think we’re still discovering what the right balance is. Every global organisation goes through that conundrum. You’re always trying to
be in-between.”

Most important in creating a global brand from “a blank sheet of paper” is retaining the “human”
at the centre of everything, says Coletta (her third ‘H’ is ‘human’). “I really believe in this, and I really think the HR function has lost the plot a bit over the last 10 years,” she says. “It got so interested in
its own internal functioning and the Ulrich model. The debate became so internally focused I was almost scared.

“And if you look at what’s happening with the big disruption that technology is bringing into the workplace and society, I think HR has to be the function that stands stronger not just for being effective, not just for supporting business transformation, not just on data-driven decision-making, but also to protect the core of humanity in the workplace.”

Some in HR have lost sight, feels Coletta, of the fact that treating people well and supporting the business are two sides of the same coin. “I think we’ve made this a dilemma when it’s not a dilemma… I believe the role of HR is to make a true commercial impact in the end. However, you do this through staying true to your purpose. It’s maintaining your compass as your organisation and the world goes through massive turmoil.”

Coletta admits she’s always been the kind of person to stand up for what she feels is right, putting this down to her start as a lawyer (she specialised in European international law). She also exercises this through her board position on NGO Health Right International.

Any HR director should gain such non-exec experience, recommends Coletta. Not least because – particularly when it involves an NGO – it shows how much you can achieve with very little.

“You learn a lot on how that world operates with very little resources to make a big impact,” she says. “One of the issues with HR is that we need to balance impact with process. The time of the 55-page handbook has gone. So it’s working with the notion of scarcity, which is sometimes painful but really drives you on the impact you need to have.”

It’s clear that Coletta is in no doubt, and is extremely driven, around the impact she and her HR team need to have going forwards. There is still much to do to ensure the intention behind the consolidation, of making “one plus one equal three”, is supported as fully as possible by HR.

But Coletta is visibly excited. Since moving from oil and gas into FMCG she’s truly found her HR home, she explains. “Brands are powerful because they have a purpose, a point of view,” she says. “It’s so much easier to drive a strong people agenda when you have strong brands.”