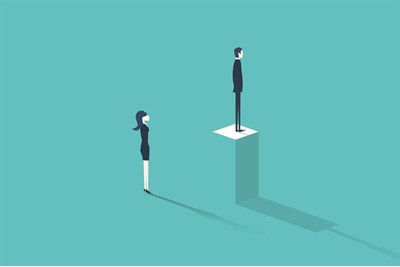 As the Gender Pay Gap Reporting requirement has starkly demonstrated, equal pay is now high on the agenda for many organisations - especially financial services - and the root cause is the lack of ...

Women are 37% more likely to experience workplace anxiety than men when negotiating a pay rise, and 39% more likely to feel nervous in a job interview, according to a report from RADA in Business.

The Beating Workplace Performance Anxiety report surveyed 1,000 businesses to see how employees are affected by anxiety in corporate environments, and found a disparity between the causes of social anxiety between men and women at work.

It revealed that while women were more likely to be anxious in situations where they had to stand their ground, male employees felt more nervous in everyday social situations. Male employees were found to be 45% more likely than women to feel anxious when socialising with colleagues, and 14% said that small talk makes them nervous.

Team building events were found to be more challenging for men, with almost a fifth (19%) reporting feelings of anxiety in these situations. Work social events followed, with 17% reporting anxiety here.

RADA in Business’s report claimed that learning techniques to overcome anxiety could be particularly useful for women. These could help with their career progression and so could help tackle the gender pay gap, it stated.

Geraldine Gallacher, managing director at Executive Coaching Company said RADA’s findings correlated with her own experience of working with leaders to improve confidence at work.

“I completely concur with the observation that men struggle more with small talk and spontaneous communications and women worry more about interviews and formal presentations,” she told HR Magazine.

She added that supporting women shouldn’t just be about ‘fixing the woman’ however, and that instead employers must look to organisational and structural factors affecting female employees' confidence. “I think women are right to worry more about formal situations to do with work because they are subject to harsher judgement than men,” she said.

She added: “Many years ago I coached an FD who was being groomed for a divisional CEO role. We spent a lot of time rehearsing small talk situations where he felt distinctly uncomfortable and yet he could ace a formal presentation to the main board.

“We rehearsed his opening lines when meeting store staff and how to invite direct reports to lunch. He went on to be CEO of a major global firm. His lack of small talk was not career limiting.

“However, women’s performance in formal scenarios result all too often in repeated calls to be either more confident or less aggressive – both of which are career limiting for women,” Gallacher added.

Elisabeth Kelan, professor of leadership at Cranfield School of Business, agreed that the differences in confidence levels between men and women at work are part of a wider, structural issue of gender bias.

“There is no harm in men or women learning skills to be more confident. But I’m quite sceptical of the idea that women can progress in their careers if they just learn how to negotiate effectively,” she said.

"Our research has shown that it’s not the case that women are not asking for a pay rises – they are, and often are still not getting them. Women can develop themselves through acquiring these skills, but if they’re still not getting results, it then becomes their fault; it can be a trap.”

Kelan added: “We need to move away from the argument that women are responsible for not getting ahead in the workplace, and start looking at what employers can do. If the opportunities are there, and women have line managers who take an interest in their career progression, encourage them, and tell them where they see them in three years’ time, they’ll be far more confident at work than they would be with employers who never bring it up.”

As the Gender Pay Gap Reporting requirement has starkly demonstrated, equal pay is now high on the agenda for many organisations - especially financial services - and the root cause is the lack of women in leadership positions. Here's what I've learned about promoting women based on my past experience developing talent in major global companies and the work I do now with organisations looking to develop more women leaders: For individuals: 1. If you’re applying for an internal promotion opportunity, get to know the hiring manager and what they’re looking for. Ask for specifics such as targets you would need to achieve or projects you would need to complete. 2. Demonstrate how you’ve performed a level or two higher than your current role to paint a compelling picture for your promotion. 3. Network outside your functional area. Learn as much as you can about your organisation’s challenges and future plans - then share your ideas on how you can contribute to achieving them. 4. Let management know about any leadership experience that you have outside of the workplace. 5. Develop successors. Not only do you show that you are a good coach and mentor (which is valued at a more senior level) but your promotion won’t leave a hard-to-fill gap in the team.. For managers/HR: 1. Create an environment where difference is valued and all employees are encouraged to speak freely about their career ambitions. 2. Ensure women feature in your recruitment, talent pools and succession pipelines. 3. Co-create development plans that explore where individuals are now and outline a clear route to reaching the role they aspire to. 4. If circumstances don’t allow for immediate promotion, set them on the path towards it: lead on a challenging project or a lateral move to gain experience in another function. 5. Ask women what issues or obstacles they might be experiencing and what else is needed to support them in reaching their full potential.