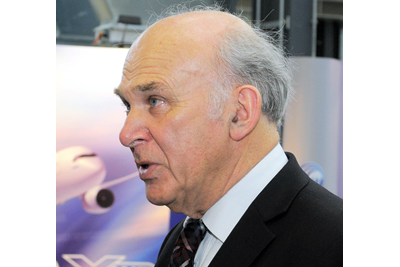 Cable said the public still do not trust many companies, especially in financial services, due to the disconnect between their annual profits and the "ridiculous" bonuses awarded to executives. He said banks should "make peace" with the public by adjusting their bonus and remuneration structures.

Barclays hold their annual meeting tomorrow in London. The bank has a bonus pot of £2.4 billion, 10% larger than last year, despite the fact profits fell by 32% during the same period.

The board will vote on executive pay at the meeting and Cable urged the company to act responsibly.

"With Barclays in particular coming up on Thursday, we will see how far they have listened to people who own the banks - the shareholders - and exercise responsibility in long term thinking," he said.

Cable said remuneration committees at all organisations should avoid damaging their brand and public image for the sake of short-term gains. "Getting pay wrong damages popular trust in business and undermines the duty to promote the long-term success of the company," he said.

The business secretary announced plans to introduce legally binding votes for shareholders over executive pay last year, but this has not become law.

The lack of action drew criticism from shadow business secretary Chuka Umuna. "After promising to introduce annual binding shareholder votes on remuneration, Vince Cable and the Tory-led government caved in and have failed to match their rhetoric with action," he said.

The news comes the day after Cable called for more transparency over hidden owners of large organisations, hoping to clamp down of tax avoidance and money laundering.