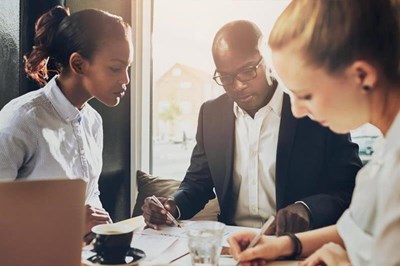 So far 2020 has been a tumultuous year in which the world of work has transformed. Ironically, it has taken a global pandemic to highlight some key employment issues that have been simmering and push them up the agenda of business leaders.

One of those is wage disparity, particularly for ethnic minorities. In June, the Black Lives Matter (BLM) movement further emphasised racial inequality across our societies.

Corporations were quick to respond with public statements and social media posts. But to demonstrate true authenticity and not just virtue signalling, this needs to be accompanied by a voluntary commitment to enduring action.

The commitment to tackle ethnicity pay gaps needs to be voluntary because, unlike gender, there is no legislation covering equal pay/pay gaps by ethnicity.

In January 2019, the UK government closed its consultation on ethnicity pay gap reporting which outlined a similar approach to the mandatory Gender Pay Gap Reporting Legislation. No action has been taken since. Following the BLM protests, a petition reaching over 130,000 signatures was put to government calling for mandatory reporting.

In response, the prime minister announced a new cross-government Commission on Race and Ethnic Disparities to examine continuing racial and ethnic inequalities in Britain. It is unknown how long it will take for relevant legislation to appear.

Data-driven ethnicity pay gap reporting is essential. Only by analysing employee data can we move beyond anecdotal evidence and subjectivity to truly measure inequality and devise action plans.

But collecting data on ethnicity has its own problems. The BITC Race at Work 2018 Scorecard Report, found that only 11% of employers were currently capturing ethnicity and pay data.

Employees can be reluctant to disclose their ethnicity - potentially because they are worried how this data will be used or even because they do not know how to identify themselves.

To tackle this, leading employers have launched declaration and communications campaigns aiming to build trust and start the conversation more openly about ethnicity so they feel more comfortable disclosing their status.

Those demonstrating success here have achieved declaration rates of around 80% of the employee base.

Mandatory gender pay gap reporting has driven corporate accountability, action and, more importantly, an understanding of structural issues that prevent female workplace progression. Some of those like occupational and vertical segregation are also drivers in ethnicity pay variance.

But there are many other structural issues like regional location, access to education, country of birth and generational differences which play out differently across ethnic groups and impact your talent pipeline. The UK ONS Study on ethnicity pay gaps for 2018 is a useful reference source here.

At an organisational level, a good place to start is to look across your talent lifecycle to identify vulnerable moments for minority groups. Monitoring metrics at key touch points will highlight where to prioritise action.

For example, track by ethnicity the number of applicants versus successful hires and candidates for promotion versus those promoted.

The BITC Race at Work charter highlighted the importance of mentoring for ethnic minorities who value mentors more. So, deploying senior leaders as active sponsors, using their influence to highlight and recommend employees when progression opportunities arise.

Company-wide transparency is also crucial, so communicate openly around topics including career ladders, pay and reward guidelines and how and why people are promoted. This can ensure employees do not deselect themselves based on self-perceived hurdles.

Any action will be ineffective unless you drive accountability and understanding from your leadership team. Research supports that the behaviour of leaders can significantly impact whether diversity and inclusion goals, needed to tackle pay gaps, really become embedded in your culture rather than being simply a tick box exercise.

Create a plan, agreeing which objectives are most important and which shortcomings are most in need of addressing.

Ultimately every organisation’s journey towards tackling ethnicity pay gaps will be different - there is no ‘one size fits all’ approach. Data driven due diligence is required to understand where barriers exist and create lasting solutions to drive genuine cultural change so every person can fulfil their potential at work.