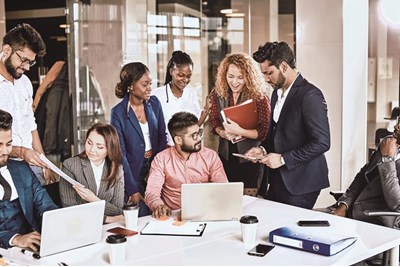 Channel 4 launched its 360° Diversity Charter in January 2015, as part of a commitment to ‘reflect society on- and off-screen’. This, Mahon said, is crucial to ensuring it reflects the changing population.

She explained that D&I are a commercial necessity in broadcasting. “For us as a broadcaster, the more we’re targeting our viewing at those younger and BAME audiences the more we know we’re going to be commercially successful.”

“Diversity and inclusion is something that has always been a top priority for us. We had the first lesbian kiss in Brookside and we had the first all-black sitcom,” she said. “Our BAME audiences are improving. They have grown by a quarter. And 60% of our viewers are 16- to 34-year-olds.”

Tackling on-screen diversity can help shift the dial on D&I among the off-screen workforce too, she said.

“The average person watches around five hours of television per day, so we have the opportunity to create a huge impact. And then there’s winning the war for talent. Companies that take D&I seriously are more likely to get the best people.”

Beyond their own organisations, broadcasters can also play a part in tackling D&I in workplaces across society. “We took 100 adverts [from Channel 4’s schedule] over four weeks, and we found that the problem was not representation within itself it was the roles they were representing,” Mahon said.

“When we looked at women they were either a housewife, a student or an office worker. And it’s not that there’s anything wrong with those roles, but it’s not an accurate representation of the way women are working today. Actually 83% of women are decision-makers. It’s commercially foolish for advertisers to represent women in this way.”

Studies have long proved that adverts have a direct impact on the type of roles people take up.

“Having role models of people in positions of power is important. We need to remember that individuals are changed by what they see. When The Hunger Games was on more girls took up archery. When Call The Midwife was on more people became midwives. When CSI was on more people applied to study forensic science,” said Mahon.

Mahon believes there has been a clear shift at Channel 4. “We spend our time thinking about how we can bring those neglected narratives into the mainstream, and it’s not always easy to do that. Sometimes deciding to be noisy, distinctive and different can make your day job harder, but when we can change people’s perceptions it’s a total joy.”

Channel 4 now has 5% LGBT+ presenters, 19% BAME presenters, and 7% with a visible disability.

Also speaking at the event was Afolabi Sonaike, associate client partner at Korn Ferry. He agreed that organisations need to take greater responsibility for D&I in society at large: “We know that people from BAME backgrounds often come from families where they are pushed to do their best and are often high achievers. But looking at research in both work and education, many are prevented from doing their best.”

“We turned to Jeffery P Howard’s theory on efficacy, which can be summed up by the idea that most people are capable of brilliance when they are supported by high expectations, given challenging assignments, and provided with feedback that keeps confidence intact,” he said. “It all starts with having to face up to our responsibilities as organisations and having conversations.”