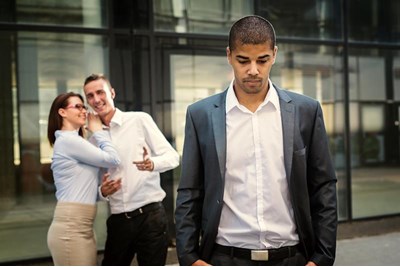 These findings are quite dispiriting, it appears we've progressed in some areas but regressed in others. The whole issue I think is an unpalatable fact for many companies. Ignoring something is not ...

One year on from the launch of the Race At Work Charter, firms are still failing to prevent racially-motivated bullying and provide equal opportunities for BAME staff

A quarter (25%) of BAME employees have experienced racial bullying or harassment at work, according to Business in the Community (BITC)'s latest Race At Work Charter survey, signalling no improvement on last year's findings.

The Race At Work Charter was launched last year and asks companies to commit to: appointing an executive sponsor for race, capturing data and publicising progress, ensuring zero tolerance of harassment and bullying, making equality in the workplace the responsibility of all leaders and managers, and taking action that supports ethnic minority career progression.


This year's research found that while nearly all (97%) employers have a clear zero-tolerance policy on racist harassment and bullying, fewer than half (45%) have commissioned a review into bullying and harassment in the workplace.

Employers are more likely to monitor and record their ethnicity pay gaps, with 63% of employers saying they monitor their gaps on a regular basis. However, only 31% of these organisations said they feel comfortable declaring the figures publicly.

The research also found that 50% of employers include performance objectives on action race for their board and senior team. But while some businesses are setting targets and KPIs for racial diversity and inclusion, just 21% of line managers have an objective to facilitate the development and progression of ethnic minority talent in their teams, the research found.

Sandra Kerr, race equality director and national campaign director at BITC, urged employers to be more transparent about where they currently stand and identify opportunities for further progress. She said that the report provides a clear picture of where organisations must improve. “Employers are making progress within their organisations to ensure that they are truly the best places to work for employees from all backgrounds and ethnicities. For the first time we now have a current picture of the challenges that need greater focus and where employers may need support," she said.


“To achieve fairer workplaces in the UK we need to encourage all employers to hold themselves accountable and to be transparent about where they are and what direction they are headed," she added.

"We can see this in the evolution of ethnicity pay gap reporting over the past few years, but half of those measuring their pay gaps are still hesitant to speak publicly about it. Similarly many are recognising the importance of a zero-tolerance approach to bullying and harassment but our results show this needs to be matched with consistent action."

Kerr added that real change will require data and targets from employers. “The goal for employers needs to be creating inclusive organisational cultures where people can feel valued for their contributions and where differences are acknowledged as strengths rather than something that holds them back. Measurement is such an important lever for change and targets must be set at every stage – from recruitment through to retention and progression at all levels," she said.

“This important work must continue, and we are encouraging employers to go even further. One year on from the launch of the Race at Work Charter we are calling on employers not only to sign up, but to encourage the key suppliers within their supply chains to sign up and take action.”

Hephzi Pemberton, CEO of Equality Group, told HR magazine that the findings reflect poorly on employers. "It is a scathing indictment of this country’s HR departments that in 2019 the workplace does not seem to nurture or support BAME talent," she said.

"As a society of business leaders, decision-makers, professionals and commentators we have an obligation to ensure that BAME employees across the country have access to a democratised career ladder that promotes inclusion for all at every level, ensuring that the community’s talents can be expressed and their potential is realised.”

Binna Kandola, senior partner and co-founder at Pearn Kandola said that the findings reveal that employers have failed to take serious action on diversity and inclusion initiatives:

“The cornerstones of any equality and diversity programme are transparency and accountability. What these survey results show is a deficit on both counts. Not wanting to share information about progress, failing to translate good intentions into clear actions and failing to create expectations of line managers all indicate a lack of transparency and of accountability. Instead, what we may be seeing is a form of virtue signalling on the part of organisations: things that look good on the surface but have little more to commend them.”

The Race At Work Charter has 191 signatories so far. This year's research surveyed 100 UK employers.

These findings are quite dispiriting, it appears we've progressed in some areas but regressed in others. The whole issue I think is an unpalatable fact for many companies. Ignoring something is not going to make it go away, it only exacerbates the problem and allows it to fester.

I worked in a university where this is par for the course and the all-white all-english senior leadership do nothing about it. Also rife with disability discrimination and victimisation of those raising grievances. Nothing changes when the senior leadership are male, pale and stale.

My partner and I worked in a Scottish University and have both been singled out and treated horribly. I left but he is ploughing through a grievance that will obviously go nowhere. HR is supporting the perpetrators. He is not the only minority experiencing this, but there seems to be no practical support or help available to deal with it effectively. The senior management do not want to know, some of whom are female (so not just a bunch of posh, white men, but no diversity in the real sense) and the bullies carry on bullying. Scotland wants to portray itself as an inclusive and welcoming country, but it really isn't. There are some serious problems with structural racism but a lack of real will to tackle it.