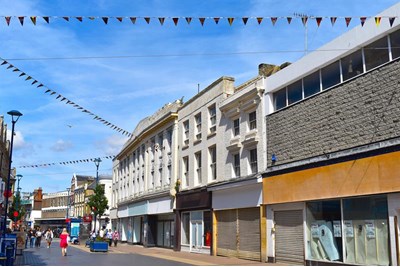 New research presents a mixed picture on the retail industry, with redundancies high but productivity rising

Policymakers and businesses should shift their attention to retail workers as the sector undergoes significant change, according to deputy head of research at shop workers' union USDAW Tony Dale.

Speaking on a panel at a recent Resolution Foundation event, Dale warned of a complacent approach among policymakers towards high street shop closures and job losses. “There has not been enough public policy focus. There seems to be an attitude that whatever happens in retail will happen. In any other sector, if there had been job losses of this scale, there would be government action,” he said.

The event coincided with the launch of the Resolution Foundation's report Sorry, we’re closed, which looked at the impact of the British high street on workers and communities. It found that the decline in retail jobs has been relatively small – at 28,000 since 2003. However, the industry faces a much higher rate of redundancies than any other sector, and those leaving retail are more likely to become unemployed than any other sector (31% compared to 26% overall cross-sector).

Dale argued that workers affected by shop closures are being ignored in favour of focus on retail properties and the end customers.

“There needs to be a strategy. What is our future? What are we looking at? What things do we need to change? There’s a lot of talk about buildings, shops and the customer experience, but not much about people,” he said. “There is a huge part of the population who are working in retail. It’s often our first place of work. As a society we should be trying to shape that and make sure we give people the right experience.”

Current campaigns from unions calling for a minimum 16-hour working week are adding to lack of job security for many retail workers, he added.

The Resolution Foundation report also highlighted, however, that retail’s shrinking role as an employer has coincided with a boost in productivity and pay for those working in the sector. Productivity has increased by 40% in retail since 2000, and typical real hourly pay in the sector has increased by more than 5% in real terms since 2009 – compared to an overall cross-sector fall of 4%.

Also speaking at the event, chairman of the John Lewis Partnership Charles Mayfield said that while the sector undeniably faces significant challenges, this is reflective of changes across industry more generally. “I don’t agree that retail is in decline; it is in major transformation. To some degree all businesses are. We’ve got an industry that is set up to serve a demand that just isn’t there anymore. The profitability of retail has halved in the past five years,” he said.

Mayfield said that while job losses cannot be avoided, changes in the sector will lead to higher-quality and better-paid jobs. “Retailers have spent close to £22 billion on technology in the past five years, and there have been job losses. One of the main areas has been in management – with more technology you need less supervision. All of those things are going to accelerate. These changes are structural, and they will be lasting. We can’t slow this down in my view,” he said.

“But there will be shops in the future; they will be more experiential. The good news within that is that it will require different skills, higher skills, and less mundane jobs, for which people will be paid more money. There will be fewer jobs yes, but there will be better jobs and better pay.”

The research also highlighted, however, that retail continues to be a largely low-paying sector, with the hourly wage almost a third lower than typical wages across the workforce as a whole (£8.80 compared to £12.73).

Daniel Tomlinson, research and policy analyst at the Resolution Foundation, said: "While policymakers can’t reverse major and long-lasting changes in how we shop, they can and should focus on the people and places most affected. Rather than trying to rescue the 20thcentury model of shop-dominated high streets, town centres have an opportunity to diversify and become 21stcentury destinations for leisure as well as retail.”