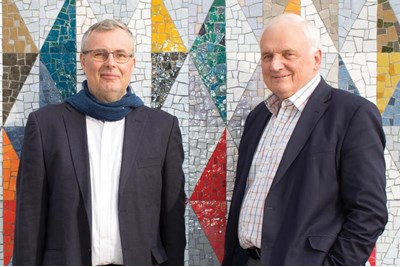 It all began with a simple question, so the preface to the book Thinking the Unthinkable: A new imperative for leadership in a disruptive age goes: ‘Why were so many leaders in government, business, major institutions and non-governmental organisations evidently struggling in the face of the start of what is now recognised as a new normal of disruption globally?’

“I’ve been on the road for 35 years and you get a smell for what’s changing,” says Gowing, when HR magazine catches up with the pair to discuss the findings in their book and wider research project.

“I’ve been in many places; including making the announcement of [princess] Diana’s death, being on air for seven hours during 9/11, and being on the Eastern side of the Berlin Wall the night it came down. It became clear to me that something odd was happening in public life, in international affairs and in governance.”

Which was the starting point for the book, with Gowing also approached by the Churchill Foundation to “do something about leadership”. At the time tensions were mounting between Russia and Ukraine, Isis’ influence was rising, and Ebola was raging in West Africa. These were just some of many ‘unthinkable’ events disrupting the world, businesses and the leaders within them.

“I felt there was a lot going on that could not be explained by the normal rationale of public life,” says Gowing. “Something was happening that we could call ‘a new normal’.”

This idea of the new normal has formed the basis of the project and led Gowing to realise the issue was bigger than he could tackle alone.

And so Langdon joined in late-2014. He recalls being drawn to the project for two reasons: “One was, having been a leader of an organisation, [thinking] how do you do it well in really challenging times? Secondly we’d also done a lot of work about what we called the revolt from below.”

Just over four years later, the co-directors have now interviewed hundreds of leaders including Unilever’s Paul Polmon and the late Helen Alexander about how leaders are dealing with this new normal.

Such unthinkable events aren’t entirely new, Gowing asserts, giving examples of past events that should perhaps have been predicted: “9/11 – should that have been foreseen? The signals were all there but it was unthinkable.”

But when things are going well people don’t question or challenge them, says Langdon. “We use the metaphor of the black elephant – something that’s in the room but no-one wants to talk about,” he says. “It isn’t a surprise; people should have known.”

“Which is why our book should really also be called ‘Thinking the unpalatable’,” adds Gowing. “The evidence is there but often blind eyes are turned.”

Leaders must be realistic rather than idealistic about unthinkable events, he asserts. It’s a notion the pair explored (pre-Brexit vote) in an article for The World Today in June 2016, in which they warned of high levels of public anger at companies and the government and predicted the ‘unthinkable’ event that would happen a few weeks later.

The frequency of such events is increasing, meaning executive leadership vulnerabilities are heightening, say the pair. “The pace of change is fast now; it’s accelerating,” says Langdon.

“When you look ahead to all the technologies that are coming soon – geonomics, AI, quantum computing – the ability people have as humans to do things is just going to be transformational.” Added to this is an increasingly “transparent news world” and our new age of public information – meaning leaders can no longer get away with things they could in the past.

It’s something Chris Donnelly, co-director of the Institute for Statecraft, is quoted describing in Langdon and Gowing’s book: ‘The rate of change we are going through at the moment is comparable to that which happens in wartime. We have change at war rates yet we think we are at peace.’

Gowing admits that the initial reception to their project was mixed. When publishing the interim findings in 2016 “people wondered if we’d been smoking something”,he says.

“Most people were in denial – they were not prepared to accept the kinds of things that reluctantly many are now having to accept; which is that the world they’ve known is not the world of todayand certainly isn’t the world it’s going to be.”

Taking a data-driven approach has been key to winning over the sceptics, adds Langdon, who insisted all interviews with business leaders were recorded. By mid-2018 the project had grown into a seven-person social enterprise including a qualitative researcher.

“We could look people in the eye and say this stuff has been verified and checked. We have a professor that works with us and makes sure all the data is properly analysed,” he explains.

But just what was so shocking that the business world didn’t want to hear it? “That leaders were no longer comfortable with leading,” answers Gowing, explaining that leaders today are seemingly unable to anticipate and cope with the new normal: “Leaders are scared, they’re overwhelmed, they’re overcome by the short-term pressures and many of them are worried that they aren’t very good leaders to cope with this disruption.”

Short-termism, confusion and fear emerged from the research as the three biggest issues facing today’s leaders. The problem, the pair agree, is that the very traits leaders have deployed to rise up the ranks, are those that leave them most vulnerable to ‘unthinkables’.

Leaders (through no fault of their own) have often gotten to the top through “conformity”, Langdon explains. So when disruptive events happen they take refuge in this conformity and are risk-averse.

“A number of companies have come to us and said ‘we want to do something with you’ and somehow it gets stuck in the mush of people not really wanting to champion it,” Gowing recounts, adding that “there’s a kind of ‘I’m not sure we can handle this’, because there’s an orthodoxy in the way things are set up even in new, relatively-radical companies”.

But Gowing and Langdon are hopeful that leaders can navigate the unthinkable events coming over the horizon. “[We] encourage organisations to audit the external reality, get away from the day-to-day stuff and look around at the threats in other industries that are analogous,” says Langdon. He recommends following their simple schemata.

The final stage of this ‘thrive on change’, is about looking not just at the risks but the opportunities or ‘managed risks’, and empowering everyone in the organisation to make it fit for coping with an increasingly complex world.

It’s an apt time to be talking about leadership fragility – in light of Trump, leadership challenges in the UK government, and a plethora of scandals in the private, public and third sectors.

That said, as with past events, the next unthinkable event can be predicted or at the very least sketched out, asserts Gowing. “It’s not yet quite some of the doomsday scenarios,” he says. “[But] HR and risk managers need to be thinking about: how do I maintain this company and ensure its continuity in a time of crisis?”