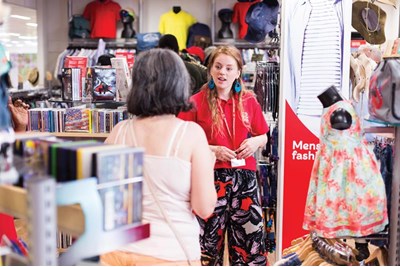 The British Heart Foundation (BHF) is a registered charity operating across the UK. It was founded in 1961 and is now the single biggest funder of cardiovascular research in the country. The BHF donates more than £100 million each year to support research into detecting, preventing and treating conditions such as heart disease, stroke, vascular dementia and diabetes. It relies heavily on the public for donations to sell in its shops, volunteers to staff the shops and take part in fundraising events, and monetary gifts left in wills. For every £1 raised the charity aims to put at least 70p towards research.

As an organisation so heavily focused on good health (to the extent it has a programme for other businesses called Health at Work) you’d expect the BHF’s employees to be included in this wellbeing agenda. But the annual staff survey in 2015 revealed, surprisingly to HR, that this wasn’t the case.

“One of the measures we have in our engagement survey is ‘how far do you feel the BHF cares for you?’ and that was coming out surprisingly low. The engagement scores were telling us that there was an issue, and we looked around and didn’t see enough activity where people were feeling they could engage with the health of themselves and the health of the organisation,” explains Kerry Smith, director of people and organisational development at the BHF.

“It wasn’t where we wanted it to be,” agrees Sarah Danes, the BHF’s head of wellbeing, safety and resilience. “The engagement score at the time for that question was at 54%. A little over half of the workforce wasn’t where we wanted [them] to be. It didn’t feel right that we were telling other employers how to do it and we didn’t have it slick in our own back garden.”

It was clear that something needed to be done then, if the BHF was to practise internally what it was championing externally.

The Health at Work resource proved a good place to start as it’s based around four holistic pillars of healthy eating, physical activity, mental wellbeing and changing habits. But the charity decided to add a fifth pillar: leadership.

“What we identified [in the annual survey] was that we needed to win over our own people to engage with this, and therefore we started to talk about the importance of leadership of the programme at all levels. So we came up with the fifth pillar that we felt needed to weave in and out of all the other elements,” says Smith.

The charity also did a self-assessment for the Workplace Wellbeing Charter (an external accreditation standard) to see how it was performing against national best practice. This helped inform the direction of the charity’s Live well. Work Well (Lw.Ww) programme, which it will submit to the awarding body early next year.

As the charity has such a geographically-dispersed workforce made up largely of volunteers it was crucial Lw.Ww came to life on the ground. “We thought if we engage our own people to sell it peer to peer then we stand a better chance of bringing people on board. We established fairly early a network of ‘wellbeing leaders’. Some of them are senior leaders, others aren’t, but they all take on this title as a status to help drive and champion the programme,” Smith says.

Getting feedback from workers on the kind of things they’d like included was also vital. In 2016, alongside the annual staff survey, HR sent out a dedicated wellbeing survey. And the results were a little unexpected.

“About 30% of our retailers smoke so we made a broad assumption that smoking cessation support might be in quite high demand. And the survey response came back and said people didn’t want that. We’ve been able to tailor our focus according to what people are telling us they want,” explains Danes.

Some of the activities for the physical activity pillar include pedometer challenges, Get on Your Feet Friday, and an annual photo competition called #naturallyBHF that encourages workers to take a photo of something in nature and share it on the organisation’s Yammer feed. This year BHF offered a prize of an extra day’s annual leave as an incentive to take part.

For the healthy eating pillar the charity encouraged food swaps, and packaged this around Halloween so it could explain the benefits of swapping ‘devil’ foods such as sugar for ‘heavenly foods’ such as honey. For the past 12 to 18 months its focus has been largely on the mental health pillar, using Time to Talk Day in 2017 as a starting point.

Smith sent out an email to all paid staff titled ‘how are you?’ and encouraged them to be open about how they truly felt. “We got a tremendous response back,” she says. “I went off to a meeting, came back and my inbox was full of people responding with some serious detail around their mental health. A number of people put themselves forward as case studies and told their story to camera.”

In May, during Mental Health Awareness Week, BHF shared those videos internally, which has inspired more people to come forward. The organisation has created a mental health vision of being ‘a place where we can continually work to understand mental health and [where] we’ll support each other however we can’, supported by a five-pillar framework of commitment, support, raising awareness, building resilience, and leadership.

This helps keep focus and adds an element of measurability so progress against the pillars can be tracked. In December 2017 BHF appointed Rethink Mental Illness to provide mental health first aid training and establish a cohort of mental health ambassadors, of which there are now 46.

Ensuring appropriate support for the ambassadors was important to HR. “We recognise that as a mental health first aider you are likely to be exposed to information that can be difficult to hear sometimes,” explains Danes. So each quarter the ambassadors come together to talk confidentially about their experiences.

A learning package about mental health has also been launched for all staff, and there are plans for mandatory training for managers. “Any paid member of staff that manages or supervises others will be required to attend this one-day course, which is to help raise their awareness of mental health, identify the symptoms in their staff and themselves, as well as giving them go-to places for further support and information,” Danes adds.

Results so far have been impressive. The 54% score in 2015 for ‘how far do you feel the BHF cares for you?’ was up to 60% in the charity’s last staff survey (September 2017). Improving the back of house for retail staff was also a big concern reported, and after embarking on a refurbishment programme satisfaction has gone from 58% to 67% in around a year. The programme is not yet complete either. Absenteeism was at 7.3 days on average per person in 2015; that’s now down to 5.4 days.

“The less quantifiable signs are some of the anecdotal feedback that we receive; we have a really active Yammer presence and there’s lots of commentary on there around the activities that we’re doing. You don’t get that if people aren’t truly enjoying it,” says Danes.

Going forward BHF wants to continue growing the mental health pillar and make greater use of digital for Lw.Ww.

“So far we’ve entirely tailored our programme around what people have told us matters to them, and we want to do that on a more regular basis and get more in-the-moment feedback from people,” Smith explains.

Ensuring staff understand the personal development benefits of mental health training is also something the charity is keen to develop. “They take it on as well as the day job so we’re looking at how we can form that into a reward and recognition and development programme so that they could work towards certain levels of achievement,” says Danes. “We hope that the feeling we’re giving something back will be very personal; a transferable skillset that they perhaps don’t recognise they’re gaining and developing. We really want to explore that with them over the coming year.”